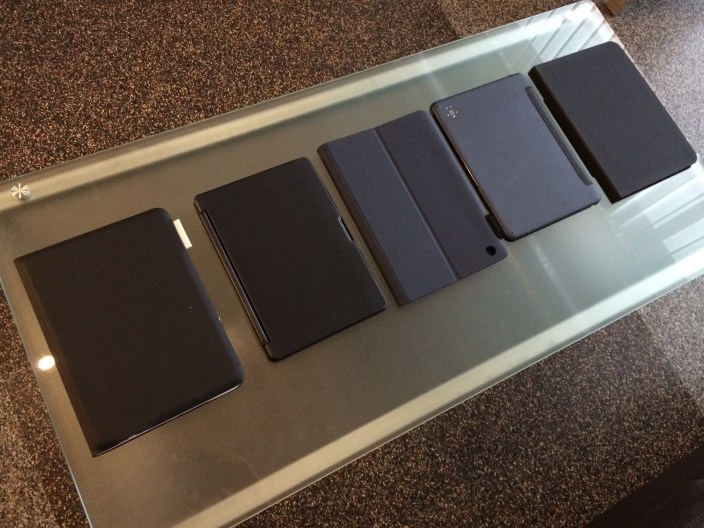 With its wide-range of applications, touchscreen capabilities, portability, and fast processing, the iPad Air has been regarded by many users as a tablet capable of content creation. Coming from a dedicated laptop, however, the Multi-Touch keyboard is a weakness. Not because it is incapable, but because it is sometimes slower to type with, less accurate, and less comfortable.

This is why several iPad accessory makers have created solutions: keyboard attachments in the form of cases. For the past few weeks, I have been testing the latest keyboard case offerings for the iPad Air from Logitech, Belkin, and ZAGG. Below, I have put together a review and comparison of the Logitech FabricSkin Keyboard Folio, Logitech Ultrathin Keyboard Folio, Belkin Slim Style Keyboard Case, Belkin Ultimate Keyboard Case, and the ZAGG Folio Keyboard: 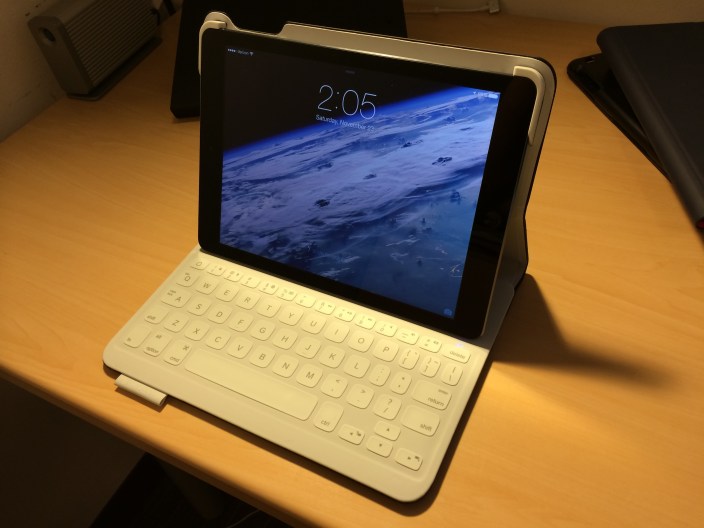 Logitech’s FabricSkin keyboard comes in a classic folio design. It flips open like a book cover, with one side holding the keyboard and the electronics, and the other holding the iPad Air. The construction is solid and does not feel cheap or like it can easily break. The materials inside, outside, and on the keys are comfortable and not slippery.

The case also feels fairly light and it is thin. To put the iPad Air into the case, you need to slide the side of the device with the volume rocker in between two pieces of hard plastic. Combined with the magnet lining above the keyboard, the iPad Air will remain propped up.

The other side of the iPad is not actually being held by anything other than the magnets so it is fairly easy, but not too easy, for the iPad Air to fall out of the propped up position. If you’re in a stable environment (read: not a turbulent airplane ride), you should be fine.

Using the accessory as a case for the Air while not in keyboard mode is comfortable and convenient. Relatively, the cover (which protects the front and back of the iPad Air) is not much bulkier than a non-keybaord case built for the same purpose. However, the electronics in the accessory add some weight. The volume rocker, rear camera, speakers, and power button are all accessible while the cover is closed.

The keyboard is wide, the keys are large, and the soft material makes the keyboard comfortable to use. However, these are soft keys, not fully physical, “clicky” keys with great feedback. I feel that if a person is already investing in a keyboard case, they’d want physical keys that rivals those found on most laptops. On the other hand, some users may be interested by the benefit (comfort) of soft keys. Overall, the keyboard does work well, I just prefer laptop-like input.

The keyboard includes a full-set of QWERTY keys, but like many iPad keyboard accessories, the layout is not life-size. Logitech has combined some function keys with letters. For example, “Tab” and “Q” are one key and “Caps Lock” and “A” are on key. In my typing tests, I found that to be annoying, but I have started to become used to it. This is not a particular negative for this model because it is a compromise found on most of the keyboards I have tested.

In addition to the standard keys, there is a row of function keys specific to the iPad’s features. The keyboard has keys for the Home button, Lock button, Siri, switching between keyboard languages, raising the virtual keys, audio playback, audio volume, and editing text. The text editing keys, which are helpful for copy/pasting/cutting specific words in sentences are located on the left and right arrow keys. The other function keys mentioned are on the top row of the keyboard (and they are combined with the numbers). To use the keys, you need to simultaneously hold down Function (fn) on the bottom left of the keyboard. This is not a major issue, but other keyboards I tested had a dedicated row for the special keys.

Like all of the keyboards I tested, this one connects through Bluetooth. Connectivity via Settings in iOS was simple, and I had no issues with the connection. There is a button on the side of the keyboard to turn the connection on and off. Logitech claims 3 months of battery life for the accessory and the package includes a USB charging cable. You’ll need to get your own adapter (or you can use the USB port on a computer or the adapter that comes with your iPad).

The FabricSkin is available for $149 and comes in two different color styles. The first, which I tested, has a black exterior and white keys. The second model has a gray exterior and orange keys. 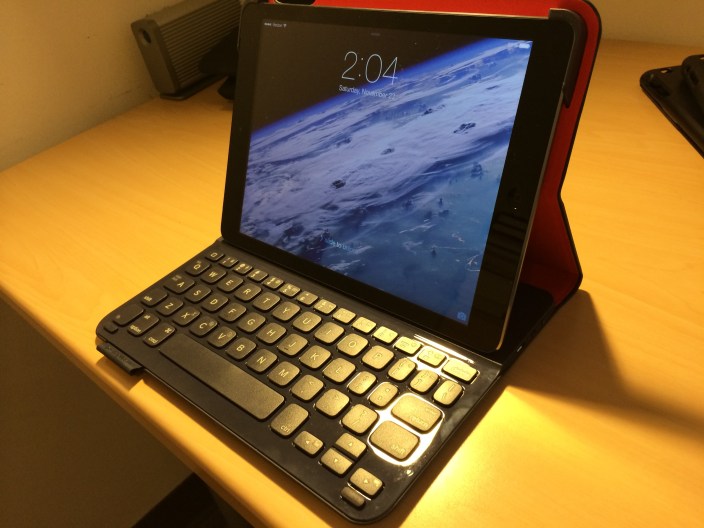 The Logitech Ultrathin Keyboard is essentially the same exact accessory as the aforementioned FabricSkin model, with the sole differentiators being colors, pricing, weight, and the keyboard’s material.

– Keyboard: Instead of being made from a soft, light material, this accessory has completely physical keyboard buttons that rival a laptop’s keyboard in feedback. The keyboard is wide and comfortable to type with. It has the same exact layout and function keys as the FabricSkin model. Choosing between this model and the FabricSkin should ultimately come down to choosing between physical and fabric keys.

However, there is a slight downside to this model. Because the keys are actual physical buttons, you will notice that the accessory is heavier than the FabricSkin. It is a tradeoff that the customer will need to make, but I ultimately prefer the physical keys. This keyboard comes in three different styles: a model with a black exterior and black interior, a model with a navy blue exterior and red interior, and one with an orange exterior and navy interior. I tested the navy and red model.

Curiously, this model is $50 less expensive than the FabricSkin model. It costs $99.99. 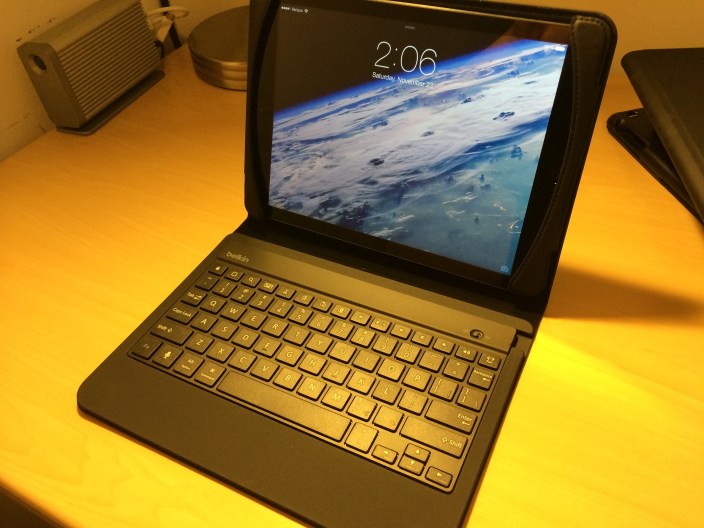 Ironically, the Slim Style keyboard appears to be the thickest of the keyboard cases that I tested. However, like the MacBook Air, it is shaped like a teardrop from thick to thin. The case is formed from soft materials and the overall aesthetic is nice and pleasant to hold. It is bit heavier than some of the other cases I tested, but it is strong and protective of the iPad. Unlike some of the other models, this Belkin unit props up the iPad with a rear hinge. I have found this setup to be very stable and secure.

The physical keys on this keyboard have great feedback and each letter gets it own key. It’s easy to type on and the keys are large, but slightly smaller than those on the Logitech models.

This keyboard has a dedicated row of function keys for the Home button, Spotlight, raising the virtual keys, cut/copy/paste, audio controls, and Siri.

Like the other keyboards, this one connects via Bluetooth, and I had no problems. Belkin claims 60 hours of typing use and 60 days of standby time. 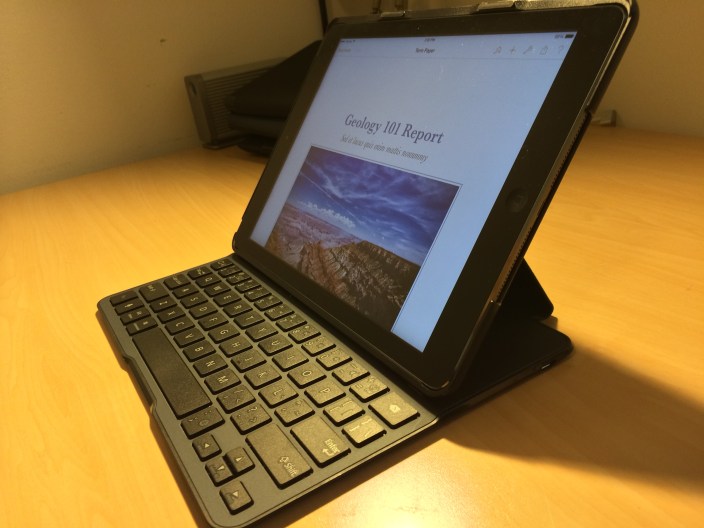 The Belkin Ultimate Keyboard props up the iPad with both strong magnetic lining and a fabric hinge. I feel that the iPad is very secure in this case. It is held within plastic, and the exterior of the case is made of both fake leather and metal. It is very light, it and adds minimal bulk to the iPad’s design. The built quality is great.

The keys are well-sized and each letter gets its own key. However, the row of special function keys for iOS features is combined with the row of numbers. You can access those by holding down the Function (fn) key. The feedback of the keys is solid. The delete/backspace key is oddly placed on the top row of the keyboard, so users will need to become accustomed to that.

The Bluetooth connectivity works well. Belkin claims 264 hours of use and 4,300 hours of standby time.

This keyboard comes in both Black and White styles, and costs $129.99. It’s available for pre-order today and ships in December. 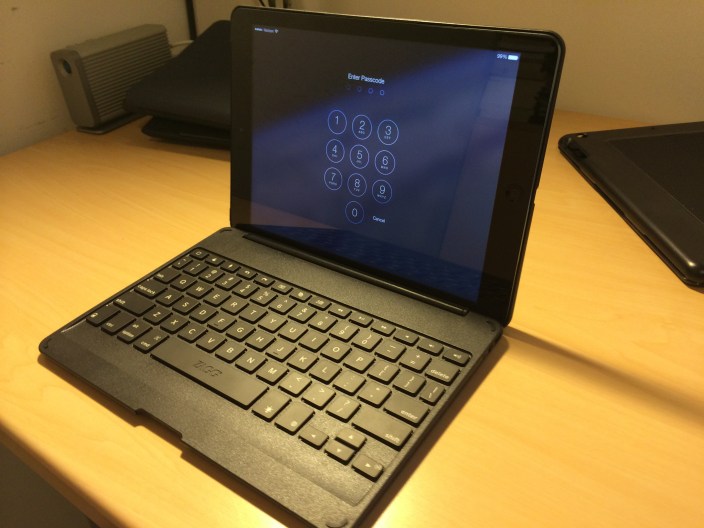 If you want a keyboard accessory that essentially makes your iPad feel like it is a laptop, this is the one to pay attention to. The case is black externally and internally and includes a hinge akin to those found on some laptops. Opening up the cover to access the iPad keyboard is difficult to do with one hand due to the weight differences in the iPad and the bottom piece holding the physical keyboard.

While the construction of the keyboard itself feels somewhat strong, reliable, and not prone to breakage, the half that holds the iPad Air feels cheaply made and unreliable. In fact, the plastic on my unit has already begun to break around the Lightning connector and headphone jack. The accessory is still, however, usable.

Sometimes, the keyboard portion of the accessory gets stuck inside the top lid of the keyboard. Out of all of the keyboards I tested, the build quality of this one is the poorest. That’s not to say it’s particularly “bad,” though.  Overall, many users will enjoy this case because of its laptop-like form-factor.

The keys on this ZAGG model are comfortable, fairly large, and have great feedback. Compared to the Logitech models, this keyboard has some bonuses: all of the QWERTY keys are on their own and not combined with any editing or function keys. Additionally, the function keys for iOS features are on their own row, not combined with the numbers. The keys, however, are ever-so-slightly smaller than those on the Logitech offerings. 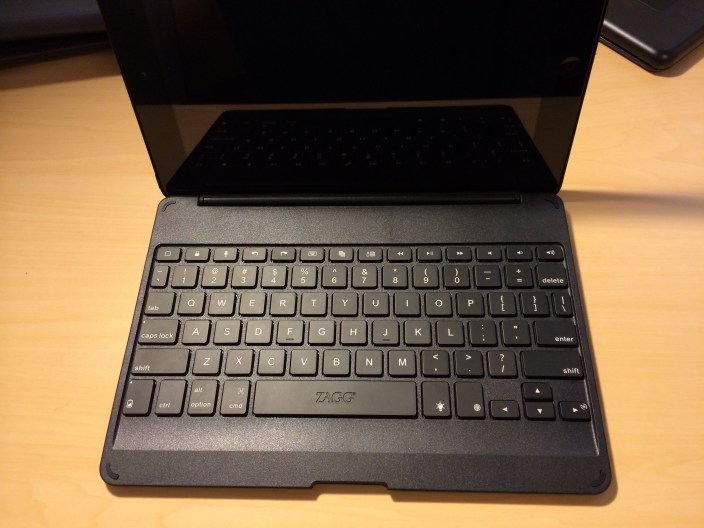 The ZAGG model has special keys for the Home button, Lock button, Siri, audio playback, volume, and copy/paste. The biggest benefit of this keyboard, however, is that it is backlit. Next to the space bar is a dedicated key to turn on and off the backlight. The backlight makes it easy to use this keyboard in the dark. There are three different levels of keyboard brightness, and clicking that key changes between brightness levels.

Like the other keyboards, it is simple to set this one up via the toggle in the iOS Settings application. I have had a couple of random, intermittent Bluetooth connection drops, but I have been unable to consistently replicate the drops or find a specific cause. ZAGG claims three months of battery life on a single charge on 2 hours of usage per day. Battery life will be affected by use of the backlighting.

This accessory also comes in a version with a white interior and white exterior, and both versions cost $99.99. They are yet to be officially released, but are available for pre-order today. 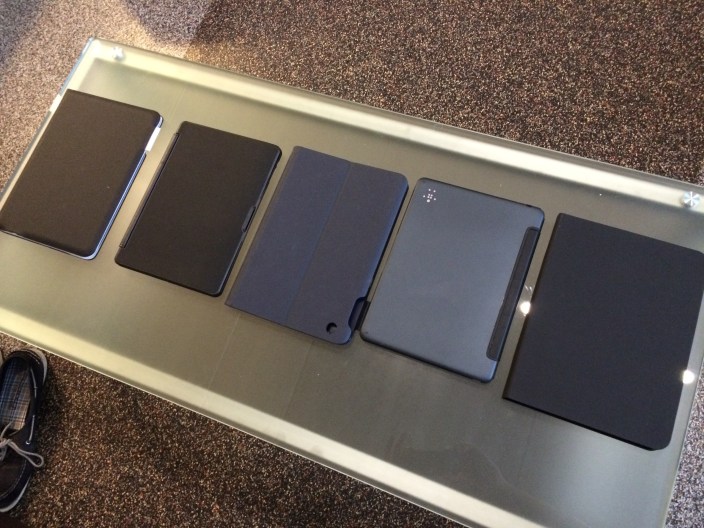 If you’re looking for an iPad Air keyboard with backlit keys, the ZAGG offering is currently the case to look at. However, it you’re not concerned with backlighting, my keyboard of choice is the Logitech Ultrathin Keyboard for its combination of price point, physical keys with solid feedback, and overall design. If you’re in the market for something a bit more portable and made from metal, the Belkin Ultimate Keyboard is another great choice.