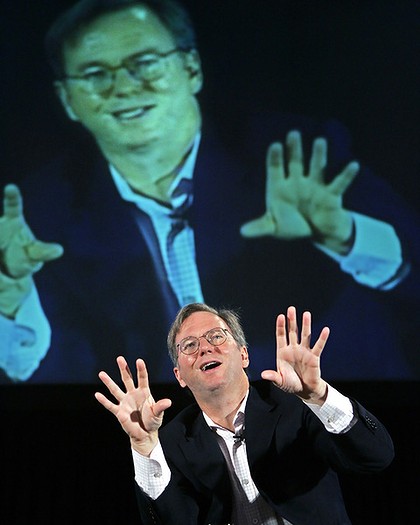 Eric Schmidt decided to help all of his friends figure out what steps to take when switching from iOS devices to Android today with a post on Google+ (that’s Google’s social network, since you’ve probably forgotten about it by now).

In the post, Schmidt says that many of his friends are converting to smartphones using the mobile operating system created by the company he runs. He then goes on to list the steps required to move content, contacts, and other data from iOS to Android.

He goes on to describe Android’s interface as being “more intuitive” than Apple’s and suggests gifting iPhone users with devices running an entirely different operating system for the holidays in the hopes that they will go along with your not-so-subtle hint and switch their entire mobile ecosystem to Google’s.

Many of my iPhone friends are converting to Android.  The latest high-end phones from Samsung (Galaxy S4), Motorola (Verizon Droid Ultra) and the Nexus 5 (for AT&T, Sprint, T-Mobile) have better screens, are faster, and have a much more intuitive interface.  They are a great Christmas present to an iPhone user!

Here are the steps I recommend to make this switch.  Like the people who moved from PCs to Macs and never switched back, you will switch from iPhone to Android and never switch back as everything will be in the cloud, backed up, and there are so many choices for you.  80% of the world, in the latest surveys, agrees on Android.

As a former Apple board member who appeared on stage at the original iPhone presentation in 2007, Eric would know quite a bit about switching from an iPhone to Android.