T-Mobile, regional carriers offering iPhone 5s and 5c for $0 down on Black Friday 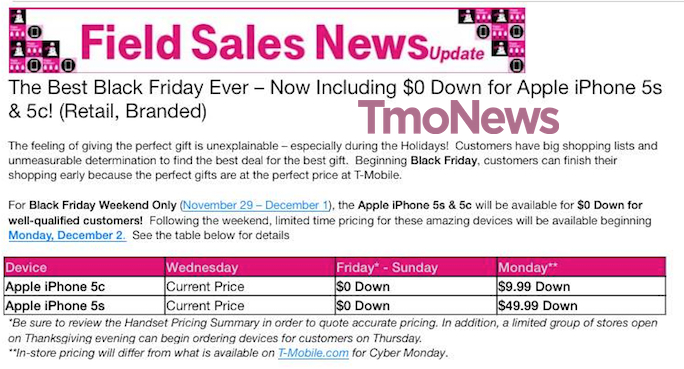 Update: It turns out this deal doesn’t provide much of a savings in the long run. T-Mobile is raising the monthly installment from $20 to around $27, so while you won’t have to put any money down up front, you’ll still be paying off the full cost of the device over the 24 month installment plan period.

According to a leaked internal memo posted by TmoNews, T-Mobile is going to be dropping the upfront price of both the iPhone 5s and 5c to $0 down on its usual instalment plans for Black Friday. That cuts the usual down payment for the iPhone 5s down from $149 and the iPhone 5c from $49. The deal will officially kick off on Friday and last through Sunday, but the report notes that “a select number of stores will be accepting orders from Thursday evening.” After getting your iPhone for $0 down, you’ll pay around $20 a month for 24 months on T-Mobile instalment plans.

Some regionals carriers are also gearing up for big discounts this Friday. Appalachian Wireless announced it will offer the 16GB iPhone 5, 5C or 5S for a penny on contract today only and nTelos will also have the iPhone 5c for $0 on Friday. Appalachian is also advertising the penny deal for Black Friday on its site, but no word if iPhones will be included after today. T-Mobile definitely beats Walmart’s best deal with the iPhone 5c for around $45 on contract, but we’re thinking other retailers and carriers might announce iPhone discounts for Black Friday too.

While Sunday is the last day for the $0 down T-Mobile deal, the carrier will also be offering the iPhone 5c for $10 down and the iPhone 5s for $50 down on Cyber Monday. The T-Mobile leak doesn’t specify, but we’d imagine that deal would be for the 16GB models of the iPhones like the other carriers.