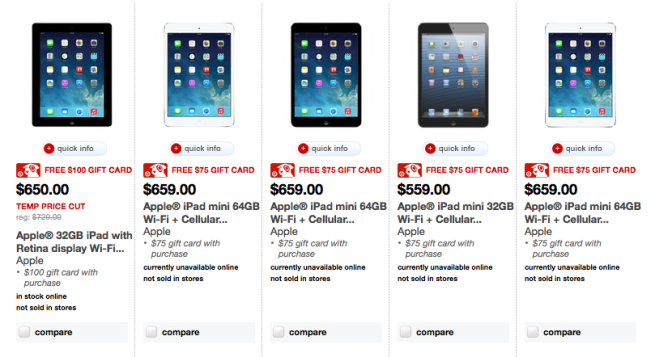 As the holiday season kicks into full swing with Black Friday, at least two of the nations largest retailers are offering partial credit to the iPad for blowout sales numbers. Target announced a successful start to the season with record traffic numbers to Target.com and Thanksgiving evening store openings.

“Starting in the early morning hours of Thanksgiving Day on Target.com, through our Thanksgiving night store openings, traffic across all channels was strong,” said Jeff Jones, executive vice president and Chief Marketing Officer, Target. “I’m excited to see how guests respond to Target’s unbeatable value through this weekend, CyberWeek and the rest of the holiday season.”

Target.com’s record traffic numbers were helped in part by the iPad Air which was sold out by mid-morning. Not to be outdone however, Walmart issued their own press release earlier today announcing “record-breaking Black Friday results.”

Walmart’s record-breaking sales were helped along by the iPad mini, a top seller both online and in store according to the retailers press release. All totaled, Walmart sold 1.4 million tablets at the time of the press release and we imagine that a lions share of those numbers were iPad units.

The good news is this is hardly the last we’ve heard of iPad sales at either retailers as we’re sure to see more price discounts and gift card offers as the holiday season continues.