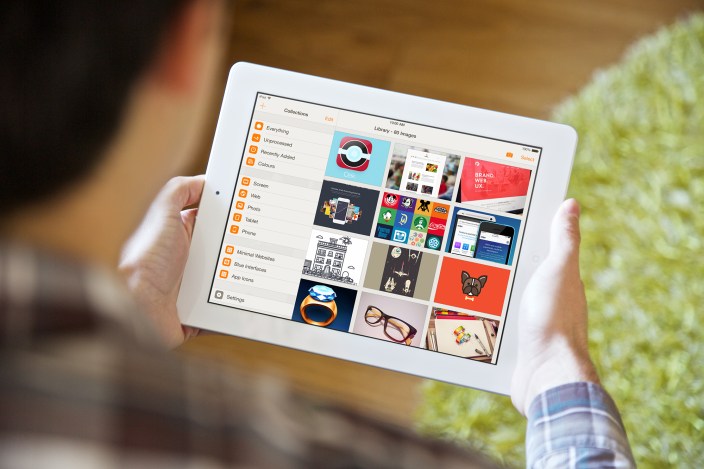 With the debut of Ember for iOS today, the image collection app from Realmac Software just got a lot more useful with iCloud sync connecting your Mac, iPad, and iPhone.

Does the complete Ember suite have what it takes to stack up against Photo Stream, Dropbox, and other image syncing solutions? Check out my week-long hands-on experience below…

Realmac Software first rebranded what was previously known as Little Snapper back in July with the introduction of Ember (full review here) and added iCloud support soon after for syncing between Macs.

That all leads up to today’s debut of Ember for iOS, a free app with in-app purchases that unlock additional features, which can sync with Ember for Mac through the magic of iCloud.

So how is Ember?

Let me put it this way: I wish Photos or iPhoto for iOS had such a simple design. It’s very content-centric and appropriately so as an image collection app.

If you already use Ember for Mac with iCloud, then Ember for iOS using iCloud is a really cool experience. For one, it’s a free app (with future in-app purchases for additional features) so it’s like adding the ability to sync your image collections to iOS over-the-air at no extra cost.

Even without Ember for Mac, Ember for iOS can be used as a standalone app for iPhone, iPad, and iPod touch to capture and organize image libraries for projects. iCloud support bridges the gap between iPhone and iPad with built-in sync.

In this regard, Ember for iOS is terrific in that it allows you to keep project images out of your Camera Roll. Currently in iOS, if you create an album within the built-in Photos app, the contents of that album must remain in the Camera Roll. While it doesn’t create a duplicate image, it does create a clutter when browsing your libraries.

Ember solves that problem by creating an additional bucket with a great design and more organizational tools.

For me, Ember creates a useful sense of focus with its project-oriented design. Completing the Ember suite really amplifies that utility for me in a big way.

There’s an added clarity to having project images stored out of the Camera Roll and in a proper bucket and Ember provides that.

Of course you could use some hackery to pull off similar solutions with Shared Photo Streams, Dropbox syncing, and other options, but Ember is streamlined and focused in what it wants to accomplish: it’s a dedicated bucket for collecting and organizing images.

My favorite feature involves color: just like the desktop version, Ember for iOS automatically recognizes color variants between images and allows you to search for image sets by specific colors. This is a major feature to give away for free on the iOS side and well worth checking out for yourself.

Is it worth it?

Well, Ember for iOS is a free app for iPhone and iPad (with unlockable features via in-app purchases), so if your workflow exists exclusively on iOS that answer is a no-brainer. Entry fee of zero amounts to no risk for at leasat checking out the design and sync across iOS.

If you’re a Mac user, the scenario changes quite a bit with a $50 price tag as desktop-class software tends to go, but Ember for Mac is undoubtedly feature-packed so there’s a lot to appreciate.

At any rate, if you find yourself capturing images on iOS and want a better way to organize and browse that collection, I highly recommend checking out Ember for iOS for free on the App Store today.