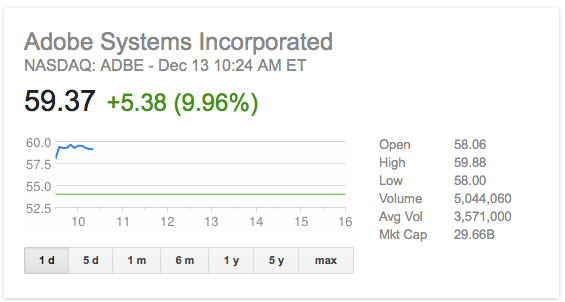 Adobe stock climbed 10 percent to just under $60 in opening trading after announcing Q4 earnings in line with expectations, and strong growth in subscriptions as the company transitions away from one-time purchase licences.

While year-on-year numbers were poor, revenue down almost 10 percent and earnings almost halved, Adobe has been at pains to point out this was expected as it shifted to subscription-based sales.

As Adobe customers migrate from a legacy Creative Suite perpetual licensing model to new Creative Cloud subscriptions, revenue is recognized over time as opposed to at the time of purchase.

See below for a cool infographic of Adobe by the numbers …

While Adobe and Apple have had occasional disagreements – most notably over Flash, with Steve Jobs refusing to allow it on iPhones and iPads – Apple customers are a hugely important market for Adobe’s creative products, with Macs pretty much the default choice for graphics professionals, photographers and videographers.

Adobe recently introduced a $9.99/month deal for Photoshop, Lightroom and Behance Pro (with 20GB storage thrown in too), initially set to expire last week but now extended until the end of the year.