iPhone 5s undisputed king at all four major U.S. carriers ever since launch 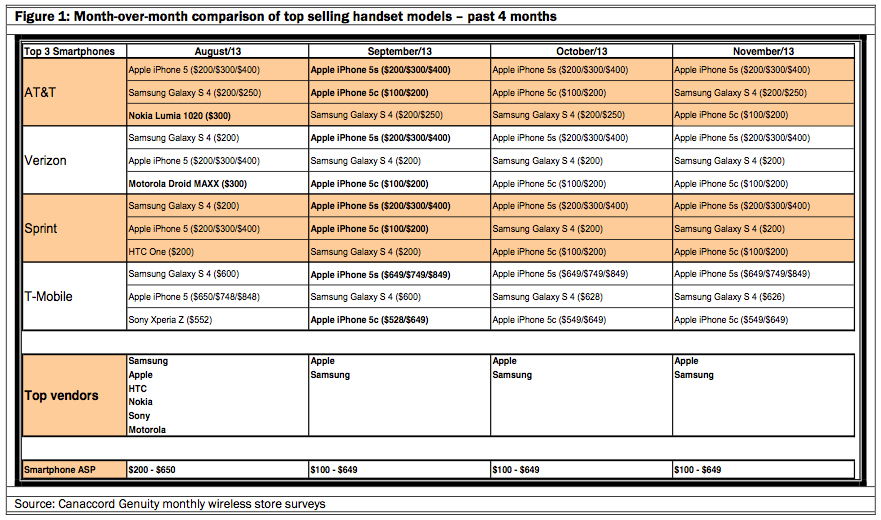 The iPhone 5s has retained its status as the best-selling smartphone at the four tier-1 U.S. carriers for the third month running, with the iPhone 5c taking third place after the Samsung Galaxy S4.

Data from Canaccord Genuity showed that the iPhone 5s has topped the sales charts at AT&T, Verizon, Sprint and T-Mobile every month since launch, reports AllThingsD.

“Our surveys indicated continued strong sales of the iPhone 5s, as it was by far the top selling smartphone at all four tier-1 U.S. carriers and at most channels where the smartphone launched globally,” analyst T. Michael Walkley explained in a note to clients. “Our surveys also indicated steady iPhone 5c sales with the smartphone’s color options and more affordable price point proving popular with its intended audience” …

Prior to the launch of the new iPhones, Apple held the top slot at only one of the four carriers, AT&T, with the iPhone 5 sitting in second place behind the Samsung S4 at the others.

On the basis of these numbers, Canaccord Genuity has increased its forecast shipment numbers for Q1 2014 from 52M to 54M. Supplies of the iPhone 5s have been a limiting factor until recently, but a store survey just a few days ago showed that supplies now appear to have caught up with demand.

The news comes just a day after the iPhone market share in China was reported to have doubled since the launch of the iPhone 5s and 5c.