You would think a high profile app written by Apple specifically for OS X and supplied with every Mac sold would be as close to flawless as you can get. Sadly, this has not been the experience many of us have had with Apple Mail for quite some time – especially Gmail users.

While Apple Mail seems to have continued to work well for those with simple needs – a single email account, no filtering into folders – power users have experienced a whole succession of problems that Apple seems unable to fix.

Unread mail counts that take an age to update, deleted emails that reappear next time you click into an account, moves to folders that undo themselves, undo actions that don’t work and – most annoyingly of all – a mail list pane that remains blank when you switch account, sometimes for seconds, sometimes even for minutes at a time.

I finally lost patience with it and decided to look around at alternatives. I’d used Thunderbird before, so that was high on my list, and some googling pointed me to Postbox, an email client which uses Thunderbird as its engine but layers a prettier user-interface on top …

With most software reviews, I like to show plenty of screengrabs of my own real-life use. With email, that gets tricky: even subject lines can reveal confidential information, so I’ll talk about my own usage but use Postbox’s canned screengrabs to illustrate. 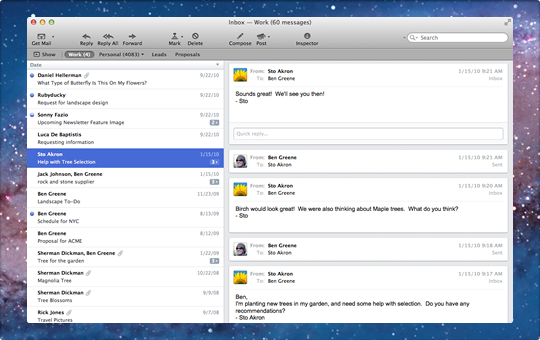 While switching email client might seem like a slightly daunting prospect, there are two pieces of good news. First, most email apps out there use broadly the same user-interface, so you’ll feel at home with the basics pretty much immediately. Second, Postbox can import your accounts from Apple Mail, getting you up-and-running very quickly.

The other good news is that so long as you’re using IMAP (see Setup, below), you will be free to switch back-and-forth between Apple Mail and Postbox until you decide whether or not you want to make a permanent switch. Postbox gives you a free 30-day trial, and it only costs $10 to buy, which gives you a single-user licence valid for as many Macs as you own.

If you’re a power-user – and thus motivated to consider a switch – you will have to do things like recreate your mail filters. And while there’s nothing difficult about that, simply finding things in different menus means the switch between the two environments takes a bit more getting used to.

Oh, and one last bit of bad news: you’ll have to train a new spam filter. All mail clients learn from the messages you mark as junk, so the longer you’ve been using an app, the better it gets at recognising spam. Expect to have a few weeks of seeing a lot more spam than usual until Postbox has had a chance to learn. You can, however, tell Postbox to trust Spam Assassin headers.

I’ve used IMAP for many years, so I don’t have to worry about my actual mail: that’s always on the server, and any deleting or moving of mail I do on any of my devices gets mirrored on the server. If you’re not already using IMAP, I highly recommend it to anyone using multiple devices for email, and usually this is no more complicated than changing a POP3 server address to an IMAP one in the account settings.

So, if you’re not already using IMAP, make this change first, in Apple Mail. Once you’ve done this, download Postbox, open it and the Account Migration Assistant will pop up. Tell it to import from Apple Mail, and within a few minutes you’ll be looking at something very close in appearance to your existing Mail setup.

If you have a lot of mail, the app will of course take a little time to fully download it all.

Just as Apple Mail stores all your mail and settings in ~/Library/Mail, and you can duplicate your setup on a second machine just by copying this folder (while Mail is closed), you can do the same with Postbox. The folder to move in this case is ~/Library/Application Support/Postbox. Once I had everything set up on my MacBook Pro, I just copied that folder via a USB key to replicate the setup on my MacBook Air.

Side-by-side, the two apps look remarkably similar. If you have multiple accounts or folders, both use the same three-column format: accounts and folders on the left, subject lines and previews in the middle, currently-selected email on the right. Both provide the same ‘conversational view’, hiding quoted text by default to avoid duplication. 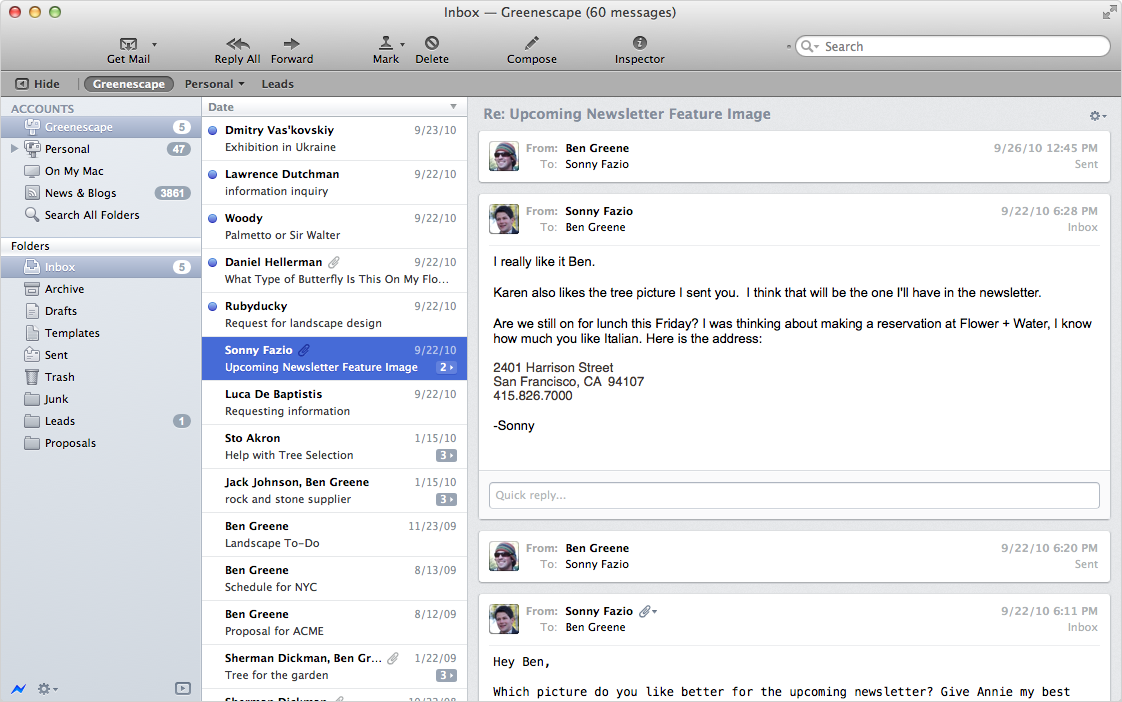 Within emails, Postbox can pull in photos from your social networks, so the conversational view is prettier than with Apple Mail. It can currently auto-import profile photos from Facebook, LinkedIn and Gravatar. 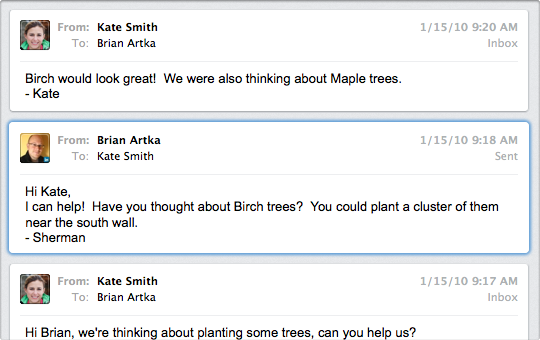 There’s also a ‘summarize’ mode which can give non-Mac owners an equally friendly view of email exchanges when sent from Postbox. 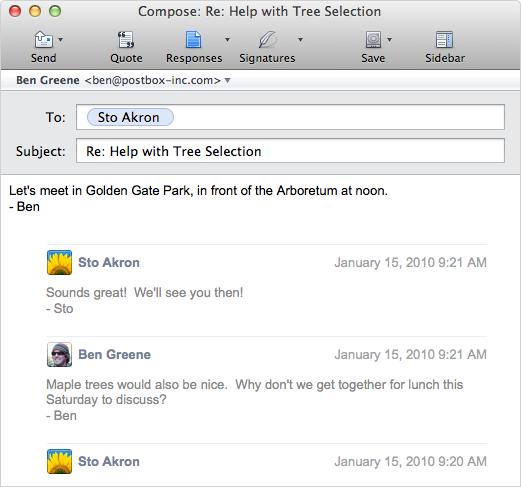 By default, the font size used by Postbox is smaller, but going into Preferences > General and then selecting Font size: Large changes it to be about the same. I compromised on Medium.

If, like me, you prefer to leave junk mail in your Inbox so you can quickly glance over it, you’ll notice one apparent drawback to Postbox right away: unlike Apple Mail’s clear shading of junk mail, Postbox simply marks it with a faint recycle icon. However, Preferences is again our friend there: Preferences > Privacy > Junk has a checkbox marking all junk mail as read, so these are then clearly distinguished when new mail arrives. 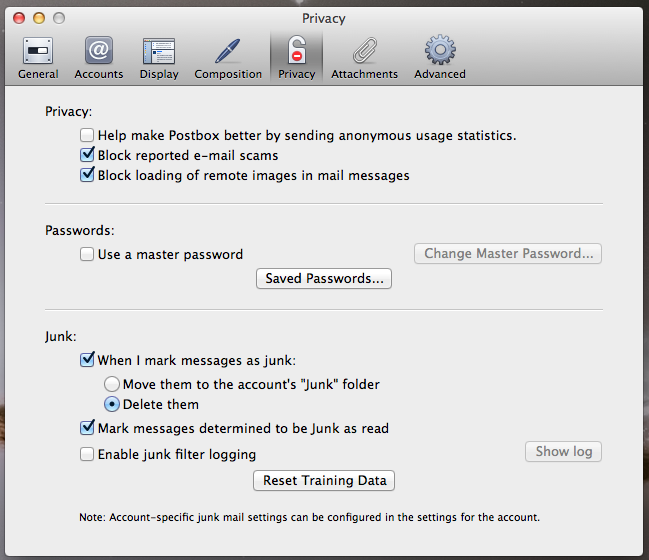 I wasn’t entirely happy with the default toolbar, but View > Customise toolbar allowed me to set that up just the way I wanted it. Unlike Apple Mail, there are no reply/reply-all icons in each mail item, so I moved these icons to directly above the mail column so they were in almost the same place. (You can also two-finger tap anywhere in the mail item to bring up a context-sensitive menu with reply as the first option.)

Those things done, there was really very little visible difference between the two apps. With the two side-by-side, I think anyone could use either one interchangeably.

The two apps handle the accounts column in very slightly different ways. With Apple Mail, your Inbox appears at the top of the column, with other folders below. Postbox is more logical, with just the account name at the top of the column and the Inbox with the other folders below. In practice, however, clicking on the account name defaults to displaying the Inbox, so there is only one difference …

If you clicked on a folder other than the Inbox, next time you click on that account, you will still be in that folder. That’s logical, but did cause me some momentary confusion.

The only other slight difference I found was that Apple Mail allows you to manually place an email in a folder by dragging the email itself, while Postbox needs you to drag the subject line/preview from the middle column. 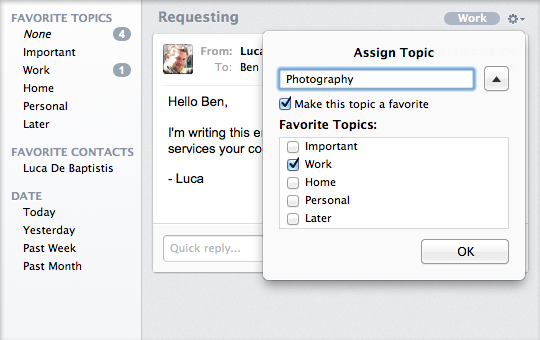 In Postbox, filters are found under Tools > Message Filters which is, to my mind, a more obvious place than Apple Mail’s Preferences > Rules. The interface to create and edit rules, however, is near-enough identical. 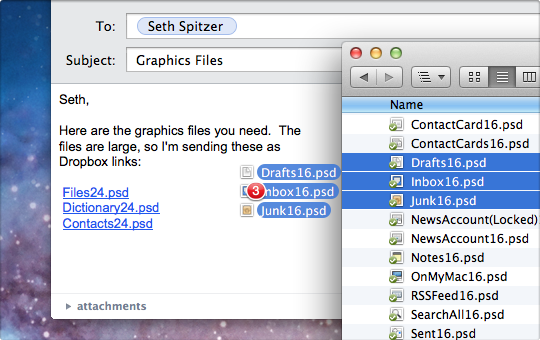 Gmail support is good, with labels recognised and the option to switch on Gmail keyboard shortcuts for a seamless transition experience between webmail and email client.

One feature I love about Postbox is you can set it to send Dropbox links instead of large files. Just drag files from your Public folder in Dropbox to an email, and Postbox automatically converts them to links. This is a delightfully convenient way to send large files.

There are a bunch more things Postbox can do that I haven’t personally found an immediate use for, such as to-do list management, file searches and saving emails as Evernote notes.

If Apple Mail worked perfectly, I would see no reason to switch, seeing the two as pretty much identical in both appearance and feature-set. If you’re one of the lucky ones who haven’t experienced any performance issues, then by all means stick with Mail.

But given Apple Mail’s problems, Postbox has been a delight: no more irritating delays when switching between accounts, no more deleted mails that suddenly reappear in my Inbox and unread mailcounts that are updated instantly, not at some point later in the day.

Given the ease of the transition, and the equal ease with which you can switch back (I’ve even had both apps running simultaneously while writing this review), it’s something I’d recommend to anyone being driven spare by Apple Mail’s current failings.

As & when Apple finally sorts the issues with Mail, switching back will involve nothing more complicated than quitting one app and opening the other. Until then, Postbox will keep you sane – for free up to 30 days, or indefinitely for ten bucks.