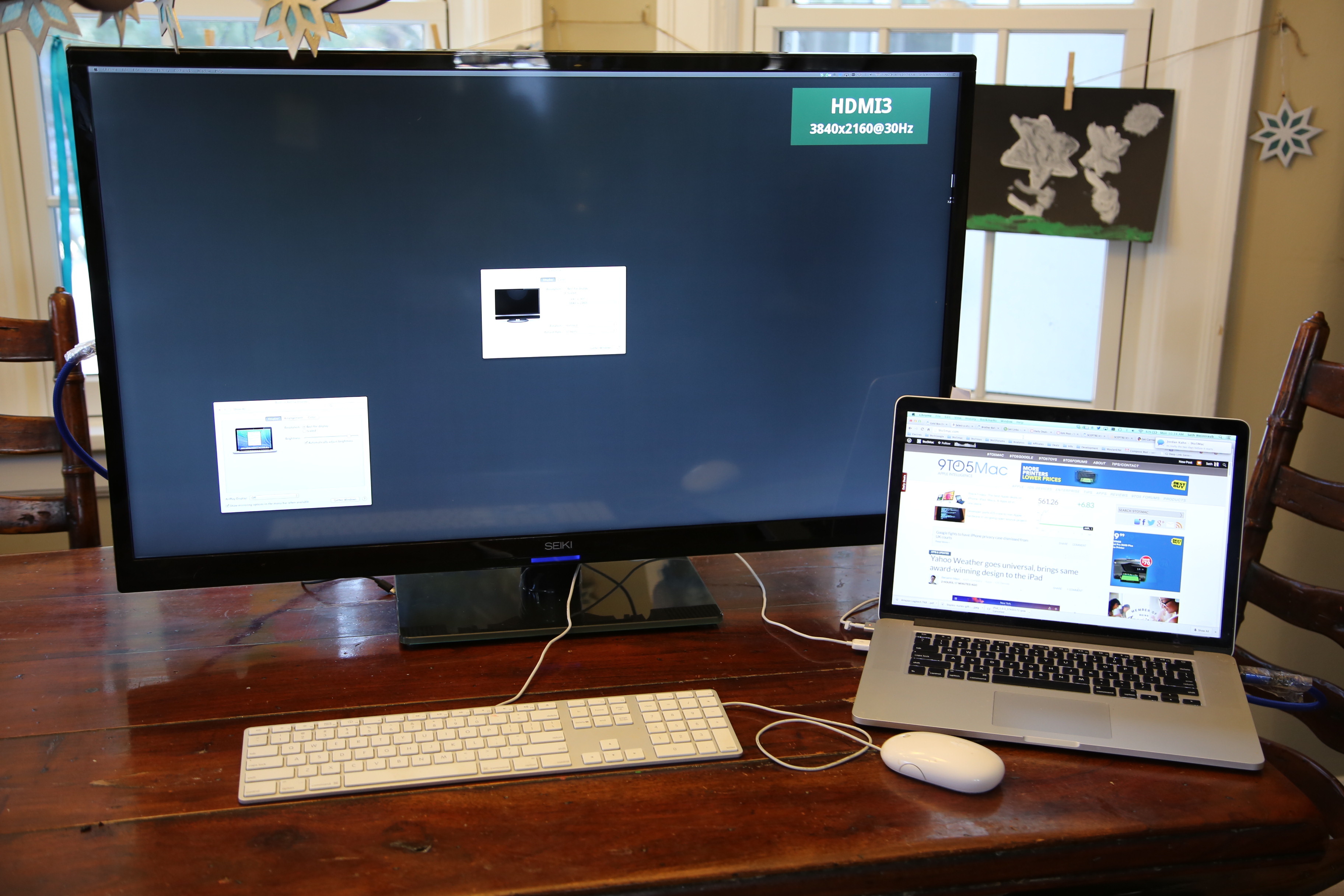 How is it as a HDTV? Can you use it as a 4K display? Should you? Here’s my take:

Overall, it isn’t as ‘bargain basement’ as I expected on the outside. It comes with a small bezel around the edges and typical plastic back. It is very thin overall and would be fine mounted on a wall – around 2 inches thick except for an annoying protruding bump on the bottom.  The stand is bare-bones without any rotating features but works fine. As for ports, this has everything most high end HDTVs come with: 3 HDMIs, 2 USBs, AUX in/out, Component, RCA etc.  The 1 and 2 HDMIs are kind of buried so you’ll need adapters to put in a Chromecast or other HDMI dongles. I used the HDMI 3 on the side but later needed it for the Mac.

I bought a refurbished unit and the settings had to be reset and firmware updated, so after hitting menu and “0” 4 times I was able to update the firmware. The menu buttons and the remote were a pleasant surprise reacting faster than either of my home TVs  – a Panasonic and a Vizio.

As a 1080P TV, this is much better than I thought. Colors, after calibration, were nice and angles were respectable.  I was able to watch Apple TV and Chromecast video just like I would on any other TV at 120Hz. I don’t do cable TV but after plugging in a $20 HDTV antenna, local channels came in great. I don’t have any 4K streaming devices so to check the 4K capabilities, I had to hook up my MacBook Pro…

Apple lists the 2013 MacBook Pro with Intel Iris Technology as being able to run a 4K display at 4096-by-2160 resolution and 24 Hz as well as 3840-by-2160 displays at 30 Hz over its HDMI port. The latter is the resolution of the Seiki and conveniently as high as it goes at 4K – HDMI 1.4 is limited at these rates. Some manufacturers say that they will update their HDMI 1.4 to 2.0 which can do higher frame rates, but Seiki has made no such promise.

I’ll say right here that this was almost a dealbreaker for me. 30Hz is unusable for gaming and pretty not fantastic for website scrolling and other stuff I do on a daily basis (not that you’ll need to do much scrolling on a huge 4K display).

I initially tried plugging in the display to HDMI port 1. The included HDMI cable was a snug fit, but it went in. The Mac wouldn’t boot it up even though the Apple TV worked on it previously. I therefore had to evict the Chromecast from port 3 where the MacBook Pro’s HDMI cable worked brilliantly.

@marczak @llsethj most TVs suck as a monitor until you turn on Game Mode and dial the contrast down to 0. They're optimized for video

The uncalibrated 4K display coming out of the MacBook is probably enough to scare off most people. It is, in a word, horrific. However, immediately dialing down the contrast and sharpness a great deal immediately saw better results. Then, moving over to the Mac’s built-in color calibration control panel and spending some quality time in the advanced level settings yields something you can actually work with.

I’m not saying you are going to come anywhere near a Thunderbolt Display or even a high quality Dell or NEC display. But it is a usable 4K and cost me less than $400. I think this would be great for coding and as a second display for those who have video/chats/etc going on in the background.

As for usability, there are plenty of bugs to be worked out. The Chrome browser is way slower than Safari right now – almost unusable, but I am writing this post in WordPress in Chrome so not entirely. Also, the mouse pointer is just a fraction of a second slower than it is natively on the MacBook Pro. It feels like I am remote desktop-ing into the display, which was initially annoying but I’ve gotten used to it.  I think this might be another casualty of the 30Hz limit of HDMI 1.4. Images, no matter how much I’ve tried, still don’t look as good as they do on a typical external display – but this may require more tweaking on my part.

On the other hand, the brightness and color seem to remain consistent throughout the display, even on the corners. One gripe I’ve had with Apple’s displays is that there is too much shine. The Seiki doesn’t shine much at all, and where it does reflect light, it is diffused in a way that isn’t hard on the eyes.

4K Youtube videos played in Safari look great and are easily watchable. I downloaded an upconverted 4K movie and it looked as good as any display I’ve ever seen. There isn’t much 4K content out there, so I wasn’t able to test as much as I would like.

But all of that is coming…

The bottom line: It does work, and for the price, it would be silly to expect more.

Will I be using this as my main display? No. 30Hz is a little hard on the eyes, and the MacBook Pro’s Iris graphics really isn’t up to the task of pushing 4K out of its HDMI 1.4 port.  However, as we look forward to the Mac Pro and its ability to throw 3 different 4K displays around at much higher framerates, this is a look into the near future.

For me? I’m going to keep this display as secondary monitor to watch videos on (in both 120Hz 1080P and 30Hz 4K), watch TV at my desk, and for testing Chromecasts, Apple TVs and anything that needs 4K in the future.