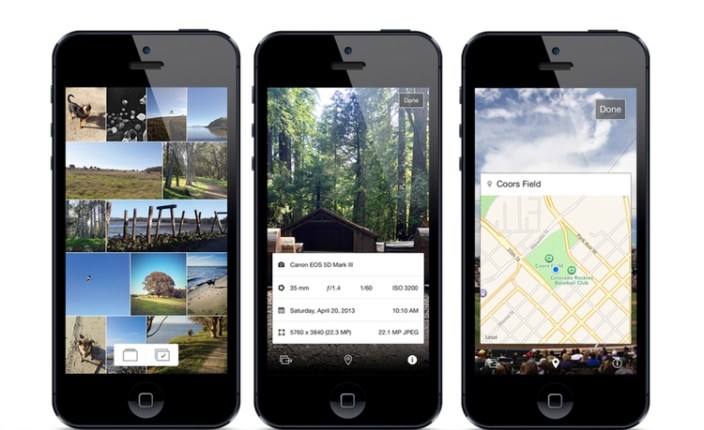 Way back in May, Justin Williams’s Second Gear teased an unannounced app via Passbook using an in-house system called Pit Pass. The Passbook pass updated to reveal the icon and name of the app released by Second Gear today: Photos+.

What the app does is really simple but useful in a big way. Photos+ displays your images from your Camera Roll and other albums found in Photos.app, but it takes a different approach to displaying thumbnails and most importantly includes EXIF info like timestamp and location hidden in the native photo browser…

As its name suggests, Photos+ adds features that the default Photos.app doesn’t offer.

The primary photo viewer offers a mosaic grid view as opposed to the cropped square grid in Photos.app. This allows you to see full images including panoramic shots without viewing each one at full size.

Viewing EXIF info is the primary problem Photos+ solves. Like any professional camera, your iPhone already captures and stores metadata including when a photo was taken and what hardware was used to take it. An iPhone even captures where a photo was taken if you grant it permission, so Photos+ simply exposes that information in a sleek user interface.

While you can find this feature in iPhoto for iOS, Photos+ is a fraction of the size (without all the filters and editing tools) if storage is a concern. Because presenting metadata is the primary purpose of Photos+, it’s also a much more streamlined experience searching for this information without the distractions of editing tools and toggles.

While the app does allow you to view and create albums, iOS currently prevents third party developers from removing photos or albums from the default Photos.app. The photo viewer also lacks support for landscape viewing in version 1.0 so wide photos, especially panoramas, are heavily letterboxed.

These limitations prevent Photos+ from being a true replacement for the native Photos.app, but rather it serves as a worthy complimentary app for photography fans.

Pro photographers and anyone with an interest in photography or data will appreciate Photos+. Grab it on the App Store for $2.99 today.