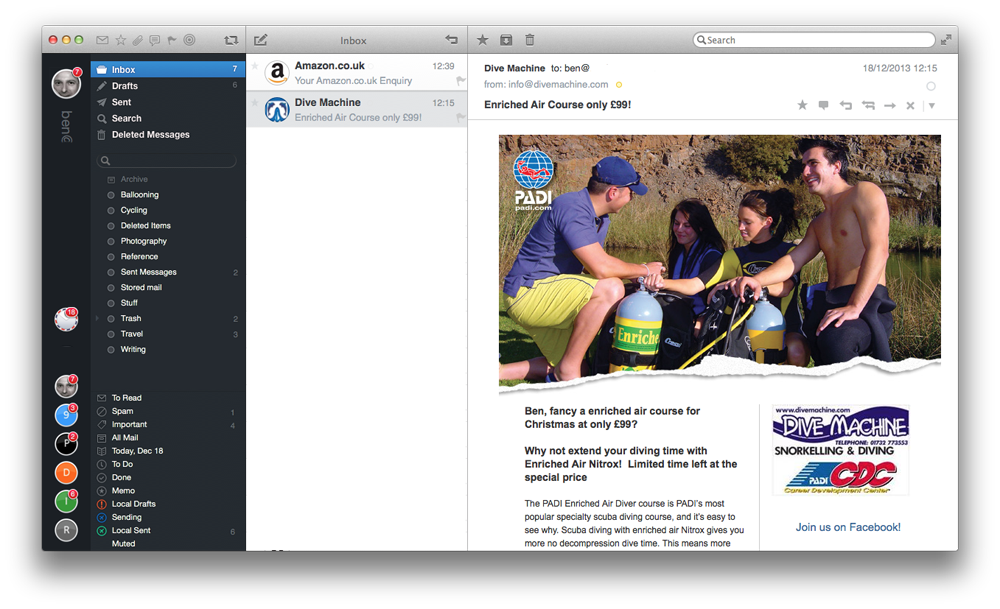 9to5Mac readers know a thing or two. When I reviewed Postbox, after explaining that I had lost patience with the flakiness of late of Apple Mail, several of the commentators recommended Airmail, a lightweight email client based on the popular but discontinued Sparrow app. It’s also the only alternative to Apple Mail and (of course) Outlook for those who need Exchange support.

Since then, Apple released OS X 10.9.1 with Mail fixes. It’s definitely better, but those unread mail counts still don’t update promptly, and my jury is still out (to put it nicely) on Gmail integration and other issues. As I mentioned before, so long as you use IMAP, switching back-and-forth between email apps is trivial, so I decided to give Airmail a try …

Unlike Postbox, Airmail doesn’t provide any canned screenshots, and I do have to be careful not to inadvertently reveal confidential information or breach the privacy of anyone emailing me, so there are fewer screengrabs than usual in this review.

Also, if you have any non-Gmail accounts and use IMAP folders, you may want to scroll down to Accounts and folders below to save yourself some time … 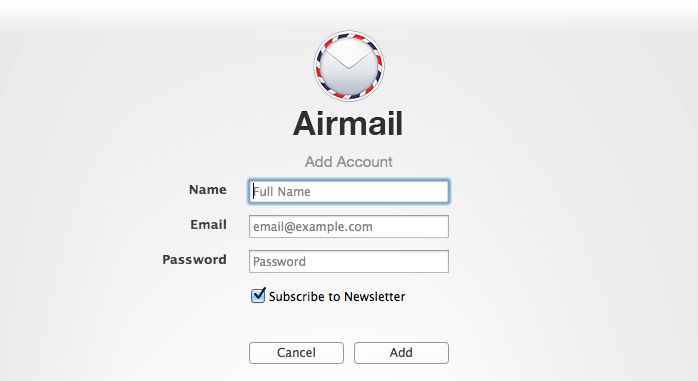 Unlike Postbox, Airmail doesn’t allow you to import account details from Apple Mail. This is no big deal these days – with gmail, all you need enter is your name, email and password and the app will grab the settings automatically – but is a surprising omission. I have a couple of non-gmail accounts, so needed to enter the server addresses and ports manually (you can look these up in Keychain, as that’s where Apple Mail stores them).

One annoyance when setting up multiple accounts: that damn ‘Subscribe to Newsletter’ checkbox is ticked by default every time. In my case, that was six opportunities to accidentally subscribe to something I don’t want. Attention every software developer in the world: absolutely nobody wants to be spammed as the default option.

I’m never quite sure whether to be scared or impressed about how integrated technology has become these days. When I entered the account details of my main personal email, Airmail automatically selected my photo as the icon for the account. More on that in a moment.

As is standard with most email apps, you can simply copy the entire mail folder between Macs. This means that once you’ve set it up for one machine, doing so for a second one is just a question of copying the folder over then opening the app. For Airmail, the path is ~/Library/Application Support/Airmail. Airmail makes this particularly easy: just to Window > Show Airmail Data to open the folder in the Finder.

Apple Mail and Postbox are both inoffensive, but I don’t think many would describe them as beautiful. Airmail gets pretty close to earning that description. I would certainly describe it as pretty.

On the far left are icons for your accounts. At the top left is the currently-selected account (I’ve obscured my email address), with the usual ‘unread mail’ counter:

At the bottom, in the same column, are icons for the other accounts:

For my other accounts, Airmail picked random icons (mostly of fruit, it appeared). Since I was never going to recognise those, I took advantage of the option Airmail offers to choose your own icons. I used a graphics app to create my own icons, opting for a simple color-code and first letter (or number, in the case of my 9to5Mac account). With this done, my icons were of course instantly recognisable to me.

Postbox picks up icons and avatars from linked social media accounts and uses them in the conversation view. You have to link the accounts before it can do this. Airmail takes a slightly different approach.

Airmail checks iCloud contacts, Google contacts, Google+ and Gravatar to find avatars and icons for your contacts without you having to link the accounts. It’s pretty impressive. Where Postbox uses the images in the conversation view, Airmail uses them in the list view – you can see here that it recognised Amazon’s email address (yes, it is holiday season) and displayed the logo.

As well as making the app look more visually appealing, it makes it much easier to find emails from particular people or companies, so this is one of those small-sounding touches that makes a surprisingly big difference to usability. (You can switch the feature off if you prefer.) 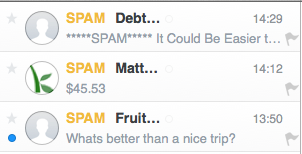 As I mentioned in the Postbox review, it’s always a bit of a pain when you have to start again, training a new email app, and this is one weakness of Airmail: there is no Spam icon to click. To mark an email as spam, you have to right-click then select Mark as spam. It’s a small thing, but definitely less convenient in the early days when you’re doing it a lot.

You can at least set the preferences to delete mail as soon as you mark it as spam.

Switching between accounts is done by clicking those pretty little icons. Anyone with more than two or three accounts will probably want to follow my example and create your own icons. All I did was screengrab one, to get the approximate dimensions, then use a graphics app to create the rest.

Folders appear directly below the inbox area. Unlike Apple Mail, you can’t see folders for multiple accounts in one view. This is much neater visually but makes it much harder to move messages between accounts.

But the far bigger issue with folders is that Airmail does not support automatic filtering of messages into folders! There is no equivalent of Apple Mail’s rules or Postbox’s message filters. I was quite taken aback by this, as it’s a feature I use a lot to keep my email manageable, and something I consider a basic feature that any email app ought to have.

The rationale, I think, is that Airmail was essentially conceived as a gmail client. Gmail allows you to configure your filters in the web interface (though of course applying labels and categories rather than folders), and Airmail recognises these and tags them in the app. It does, though, rule it out for power users who have non-Gmail accounts. 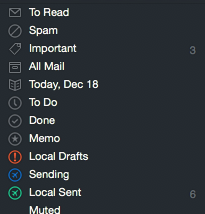 I did find a few other issues with the app. There’s no way to customise the toolbar, for example. Again, this is a basic that I expect from any email app, and I discovered it was missing when I went to add a clickable icon to mark a message as spam. Nope: it can’t be done.

I also found that it sometimes jumps to high-ish CPU usage. Mostly it sat at less than 1 percent, but would sometimes hit 25 percent or so for no obvious reason. It also stopped responding to right-click once and had to be force-quit.

It’s a beautiful user-interface, it really is. I liked it so much that I even very briefly wondered whether I could manage without automatic filtering into folders – that’s how pretty I think it is.

But ultimately, as much as I appreciate aesthetics, form is no good without function. My main personal account – an email address I’ve had since sometime in the Bronze Age – isn’t a Gmail one, so the app isn’t going to work for me.

If all your email accounts are Gmail ones, however, I would absolutely recommend taking Airmail out for a spin. Despite the lack of account import, setting it up takes a matter of minutes as all you have to do is enter your Gmail account details and Airmail will do the rest.

There’s no trial version available, but when the app costs two bucks, really, who cares. You’ll spend more on a cup of coffee the first time you use it in your local Starbucks. It’s available from the Mac App Store.