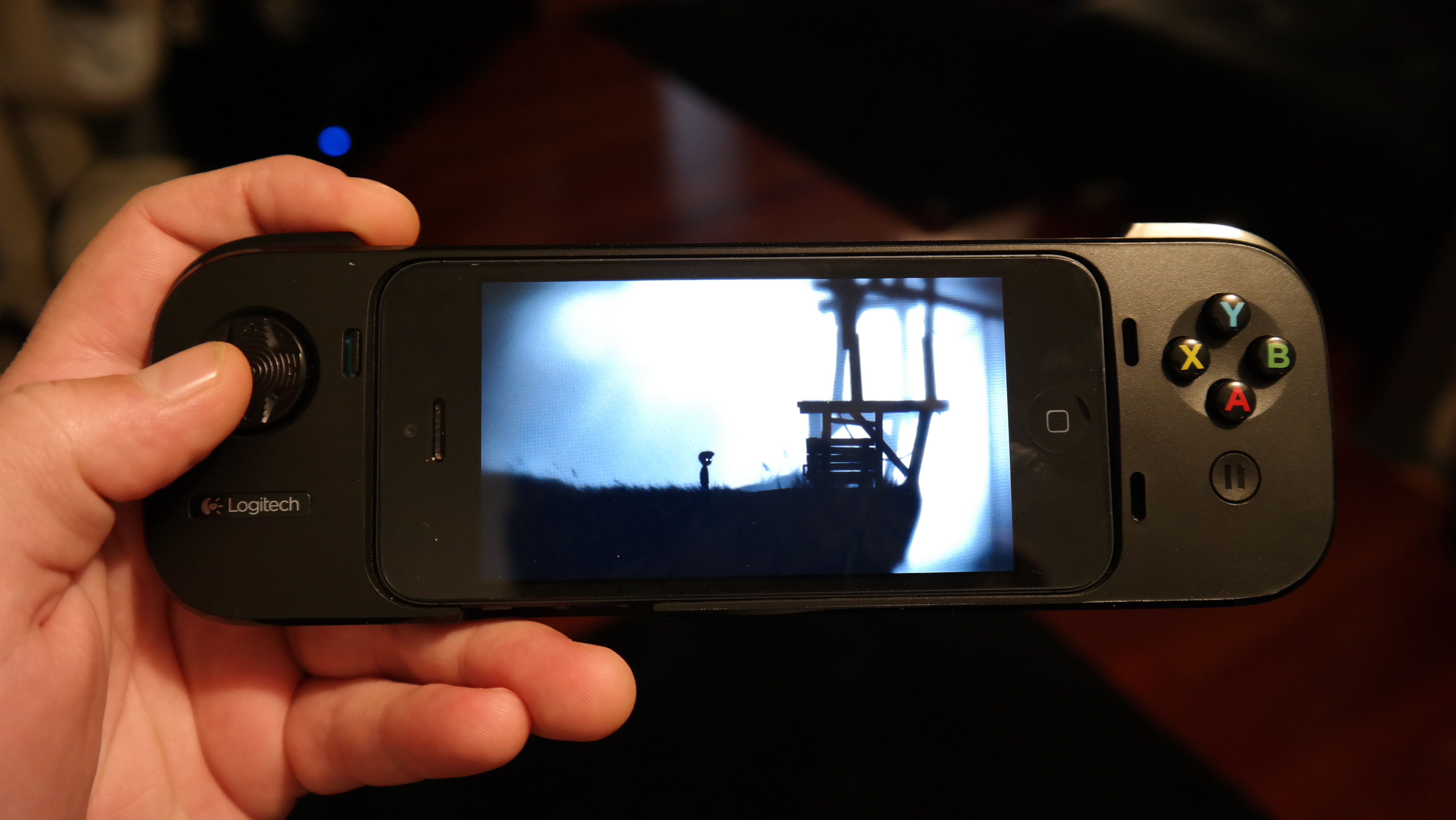 Following the introduction of Apple’s new MFi game controller frameworks at WWDC in June, well-known accessory makers this month have released some of the first Apple-certified, Made for iPhone gaming controllers. Today I’m taking a look at one of those controllers with the new Logitech PowerShell, followed by some details on exactly how it differs from the new MOGA controller and exactly what to expect from Apple’s new controller experience as we wait for developers to update games with support.

Logitech has decided to use Apple’s form-fitting controller specification, which means the iPhone docks directly into a recess in the controller using a built-in Lightning connector. Setup couldn’t be any easier with the Powershell, an iPhone 5S or 5 slides in snuggly with ease and the controller is instantly connected and ready to go for compatible games. It also supports iPod touch with a small rubber mat to make up for the size difference. The 21mm profile and 120g weight of the controller felt rather comfortable in my hands despite measuring in at 7.8-inches in length (not exactly pocketable), and a rubberized grip covering the entire backside gives the whole unit a much more solid feel than the glossy plastic MOGA controller. Keep in mind that slim design also packs in a 1500 mAh battery pack that will get you roughly 70% of your iPhone’s battery life back if you’re in need of some extra juice. 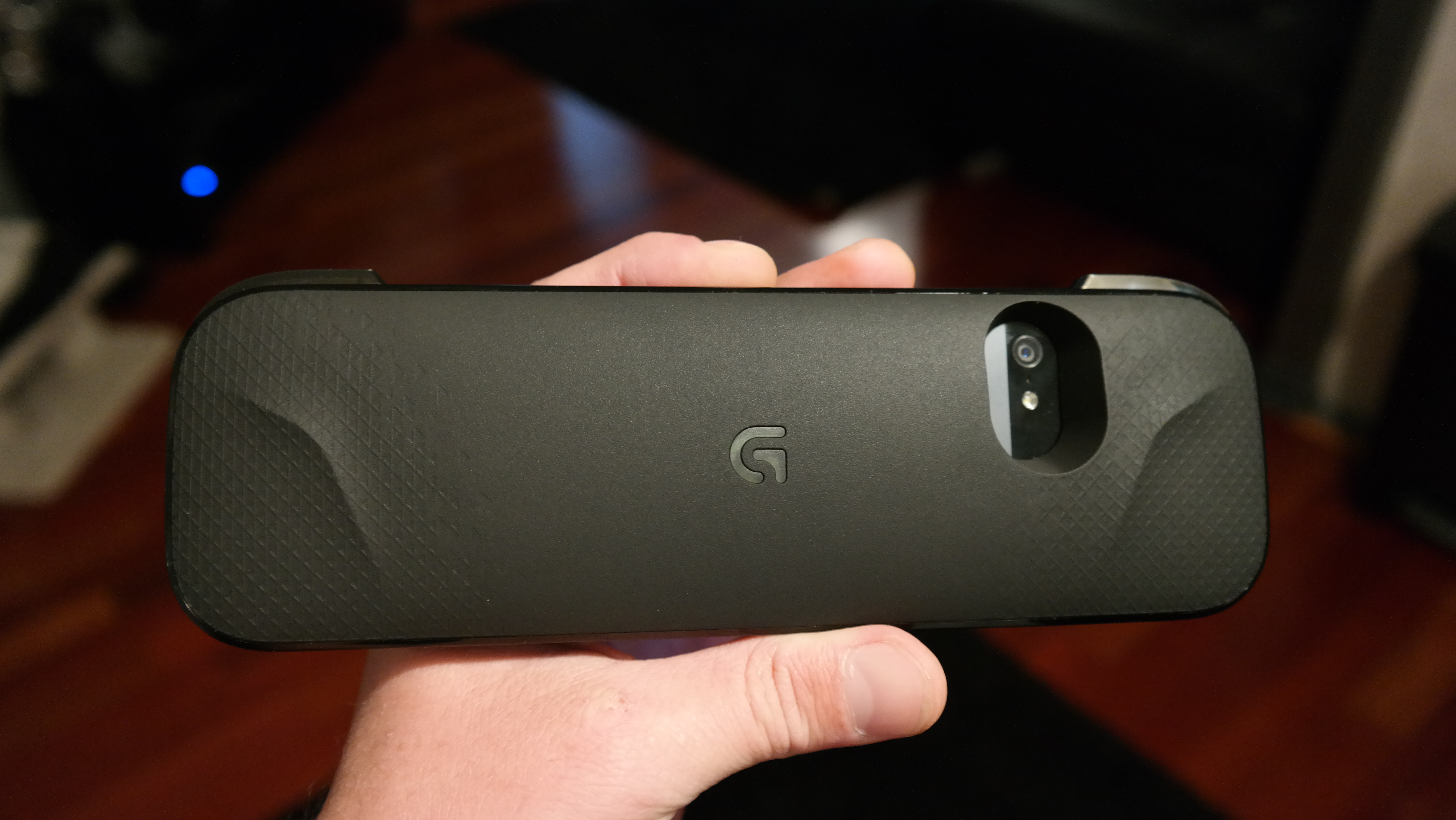 The design leaves access to your volume controls and camera and it does a good job of amplifying audio out from your iPhone’s speakers through openings on the front of the controller without hurting audio quality. Two small annoyances with the design could have been avoided (and don’t exist on MOGA’s controller): Using headphones requires a rather large blue rubber adapter pictured below, and the small spring-loaded switch next to the D-Pad that activates the iPhone’s Power/Sleep/Wake button is extremely stiff. 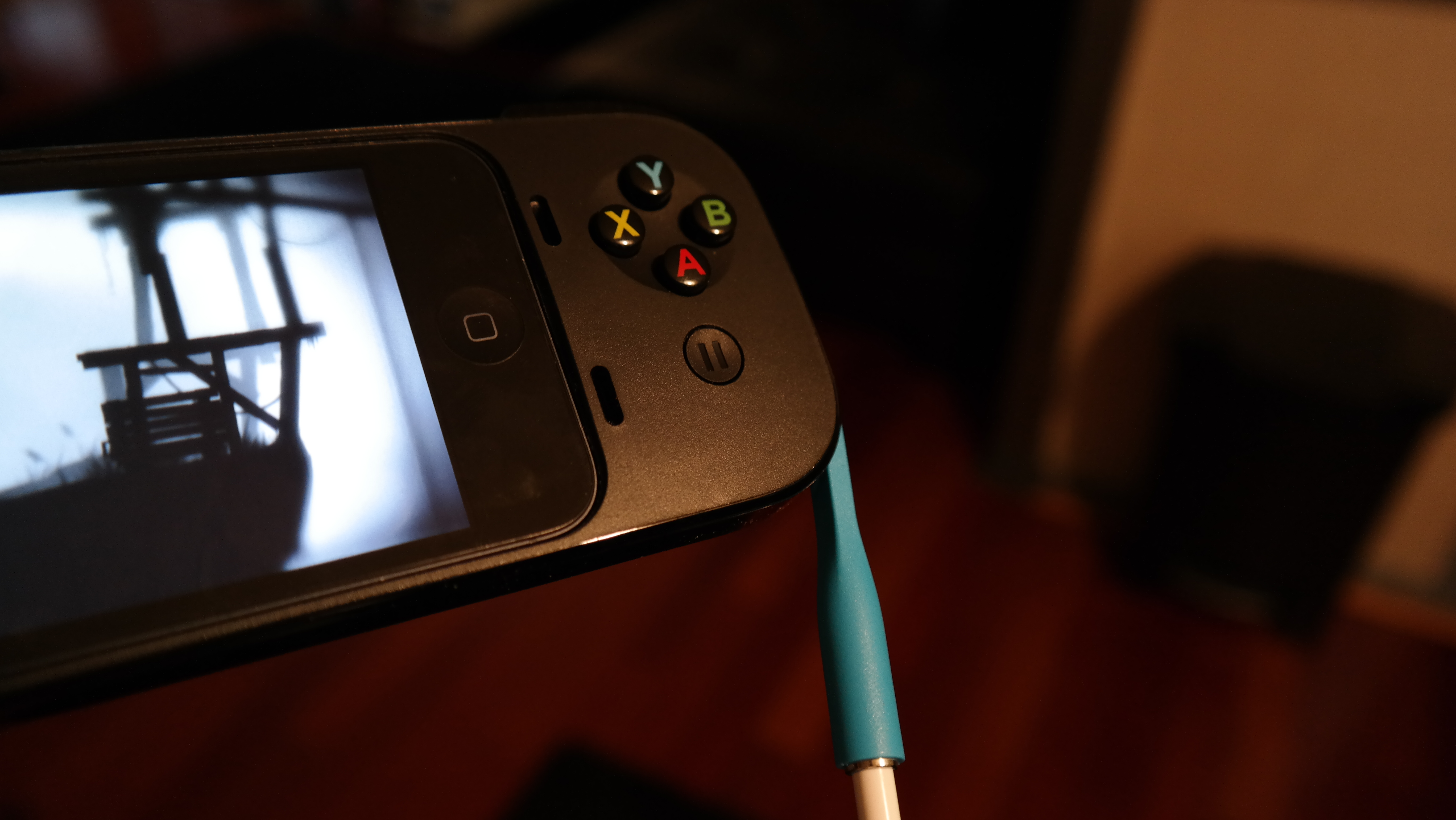 The PowerShell uses Apple’s standard layout. That gives you four face buttons (X, Y, A, B), a D-Pad, a pause button, and two shoulder buttons, essentially your standard Super Nintendo controller. That compares to Apple’s “Extended” layout that you get with the MOGA controller, which adds dual analog joysticks and a second set of shoulder buttons up top.

The biggest problem with the Logitech controller are the face buttons and D-Pad. While sensitivity wasn’t an issue, the X, Y, A, B buttons feel flimsy and rattle around sitting loosely in the openings they protrude from. The buttons also feel a bit crammed together, leading to the occasional accidental button press. Unfortunately things don’t get too much better for the D-Pad, which also feels painfully cheap and shallow. Like the D-pad, the shoulder buttons feel a little bit stiff and sticky compared to what you’ll find on a typical console controller. That being said, I didn’t have any issues with the buttons not reliably recognizing my inputs like some reviewers have. It’s all not an issue for the casual gamer that just wants to play a few quick games or keep their kids busy, but hardcore gamers used to console game controllers will wish there was a little more work done to the D-pad and face buttons.

While the SNES style standard button configuration is perfect for playing retro, 2D platformers and sidescrollers like Sonic or Pacman, don’t expect a smooth experience playing 3D games like Grand Theft Auto that were originally developed for the dual analog joysticks found on controllers of modern consoles like the PS3. While games like GTA have been adapted to the touchscreen of the iPhone and iPad, those controls don’t translate smoothly back into the standard configuration on the Logitech controller. It will be up to developers to come up with a solution that will work for all MFI controllers, but in the beginning controllers using Apple’s extended layout with dual analog sticks will be compatible with more games than the standard layout. It’s mostly a problem with 3D games that often use dual joysticks (whether as onscreen controls or with physical controllers) to control, for example, the camera and character movement at the same time.

SHOULD YOU BUY IT?

A lot of the problems that exist with Logitech’s new controller are simply due to the fact it is first out of the gate. It’s going to take some time before developers have properly updated their apps to support the new MFi controllers, and there are solutions to make all games work with both the standard and extended layouts. Developers at Crytek showed off how they implemented support for the new controllers using a combination of touchscreen controls and button mapping to accommodate both layouts. In other words, devs can come up with creative ways for their 3D games that require more than just a D-pad to work on the standard layout.

Don’t hold that against the controller. Apart from the flimsy face buttons that might not last long for heavy Street Fighter players, I generally had a good experience playing games that supported the controller. For casual gamers that don’t have a problem sticking to the supported games, the PowerShell won’t disappoint despite a few shortcomings. If you’re a hardcore gamer that will be playing for hours on end, the buttons on the PowerShell leave a lot to be desired.

There have been a lot of reviewers shouting about the high price tags on the new MFi controllers compared to your standard $60 Playstation or Xbox controller, but that’s a little unfair. With the added bonus of a built-in 1500mAh battery pack, the $100 starting price on the Logitech PowerShell doesn’t make me hesitate recommending it for casual gamers. The Logitech PowerShell is available to ship from Amazon immediately for $99.