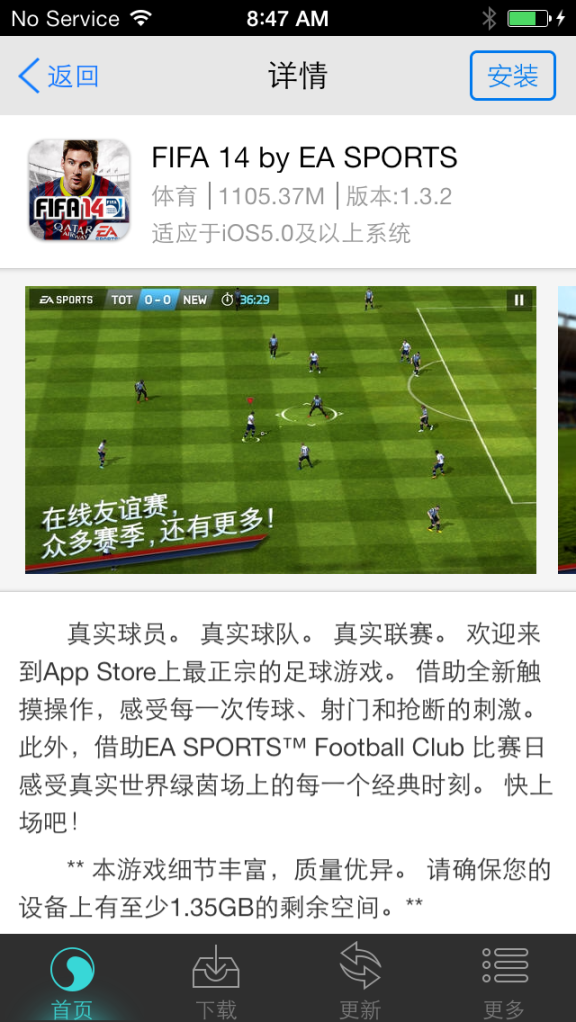 This morning, the evad3rs released the first public iOS 7 jailbreak. At the time, it seemed like something was off because other key members of the community had not been informed of the upcoming release. For instance, Jay Freeman (@Saurik on Twitter) had not been notified and as such the version of Cydia bundled was not official or up-to-date.

It turns out, however, that more questionable activity has taken place. The evasion jailbreak includes a Chinese ‘alternative’ app store, which is full of cracked versions of real apps and games found in Apple’s App Store.

The pirate store only appears if your device language is set to Chinese. The reasons for the inclusion of this app is unconfirmed, but speculation on Twitter by several ‘informed’ members of the jailbreak community claim that the evad3r’s accepted a cash deal with a Chinese company to bundle the illegal app. The Chinese company responsible for the pirate app store is Taig.com.

Chronic says that this opportunity was offered to several high-profile people in the jailbreaking scene, with cash values of over $150,000 being offered.

pod2g, one of the creators of the jailbreak, has responded to the controversy saying that any pirated apps found in the Chinese store will be removed from sale:

@saurik wait 5 minutes, it's going to be removed.

They are rumors saying that Taig is a piracy app market. We are really concerned about piracy. Apps of this kind will be removed.

We will soon post an article on reddit of the whole story, explanation and truth of evasi0n7! And there's a lot to say :) Stay tuned.

Update: Here’s the official statement and some tweets from @saurik 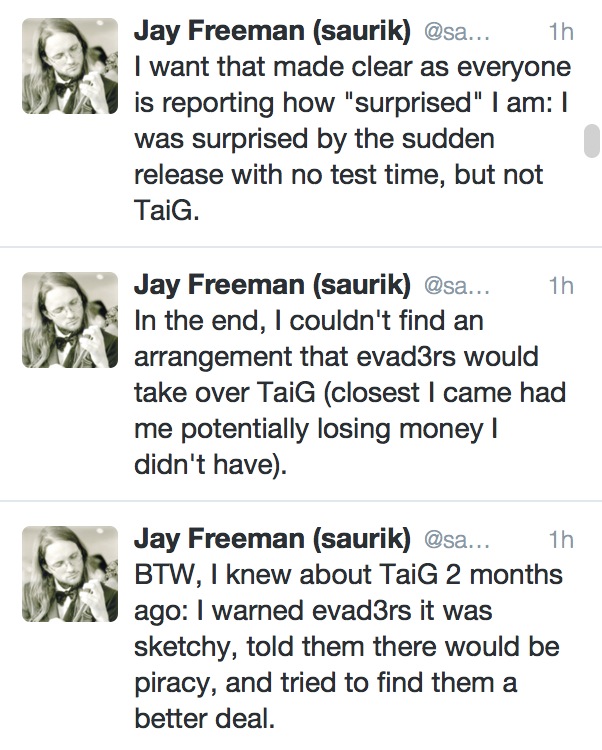 Update 2: It appears that TaiG is no longer installed by Default on this particular jailbreak.

We have decided to remotely disable the default installation of TaiG in China for further investigations on the piracy issue.

We are deeply troubled by the rumors and speculation surrounding our iOS 7 jailbreak. We would like to present the whole story to you.

Most of the concern surrounds the inclusion of the Chinese App Store Taig. In the course of developing the iOS 7 jailbreak, we were approached by the company with an offer of partnership in offering Taig bundled with the jailbreak in China. Taig is a Chinese App Store written in Chinese. tailored and, we believe, well suited to meet the needs of users for the Chinese market. Users are not locked into Taig. Cydia can also be installed and Taig removed afterwards. It would be deeply hypocritical to remove choice from the user in the course of jailbreaking.

Taig has never asked us to disclose our exploits to them, let alone sell them. We were simply asked to bundle their third-party app store in China in a similar way we bundle and distribute Cydia around the world as an additional App Store, and in a similar way to how previous jailbreaks like blackra1n have bundled non-Cydia stores.

Of course, the safety and security of our users is a paramount concern, and due to the amount of close scrutiny by security professionals around the world, we offer one of the lower risk programs available for download on the Internet. We are saddened by the accusations that we would ever do such a thing, or sell weaponized exploits. If anyone ever attempted to include malware in a jailbreak, we are confident that the many security experts combing through jailbreak software would find it. The binaries are obfuscated for a similar reason to why we have in the past compiled in Cydia rather than including it as a separate file. We wish to secure the integrity of the jailbreak and discourage its use by third parties who may in fact wish to weaponize it. The obfuscation is of course not intended to deflect serious analysis by security professionals (who have quickly already fully analyzed and discussed the contents of the jailbreak), it is simply intended to prevent easy repackaging by other parties.

Preventing piracy is also extremely important to us. We are deeply sorry and embarrassed about the piracy that was seen today. All of us have spoken out vehemently against piracy in the past. We donâ€™t believe itâ€™s right for developers to not get paid for their work. In our agreement with Taig, we contractually bind them to not have piracy in their store. This was an extremely important precondition of working with them. In entering the agreement with them, we had hoped and continue to hope that our cooperation with Taig will improve the piracy situation in China. Many App Stores within China, including those run by large corporations, have many issues with pirated software. Promoting an app store that is required not to have piracy with our jailbreak, we believe, will help developers.

We are very upset that despite our agreement and review by their team, piracy was found in the store. It was not acceptable and they have been strenuously working to resolve the problem in good faith, and have removed all instances of it that we have brought to their attention. We are happy that it was not overlooked by the community. Weâ€™ve been so heads down working on the code that we didnâ€™t see this. We are sorry. We will continue to monitor this issue and work to resolve it completely. Taig will be pulled from the jailbreak if it cannot be resolved.

Many of you have also wondered why this jailbreak was released without Cydia and MobileSubstrate being updated for iOS 7. After we received the offer from Taig, we informed Saurik, our friend, of our decision to accept the offer. SaurikIT had been in talks with Chinese companies regarding potential partnerships, made a counteroffer. We believe they share our views on how a relationship with companies in China currently utilizing jailbreaking might benefit everyone in the community. Unfortunately, the negotiations did not work out. A few days later, we received information that SaurikIT was working with another group to release a jailbreak ahead of us. We decided to release, knowing that Cydia, MobileSubstrate, and jailbreak tweaks would be updated after a few days, just as it always has in the course of jailbreaking.

Yes, we have benefitted financially from our work, just as many others in the jailbreak community have, including tweak developers, repo owners, etc. Any jailbreak from us will always be free to the users but we believe we have a right to be compensated in an ethical way, just as any other developer. However, the interests of the community will always be the most important thing to us. When releasing the jailbreak, we pledged all our donations to foundations supporting the interests of the community. We are deeply upset at how we have inadvertently distressed the community and we are focused on fixing it.

We love the jailbreak community and you motivate us to do this work. Having a choice and freeing your device is important.

We hope you understand and we thank you for all of your support.