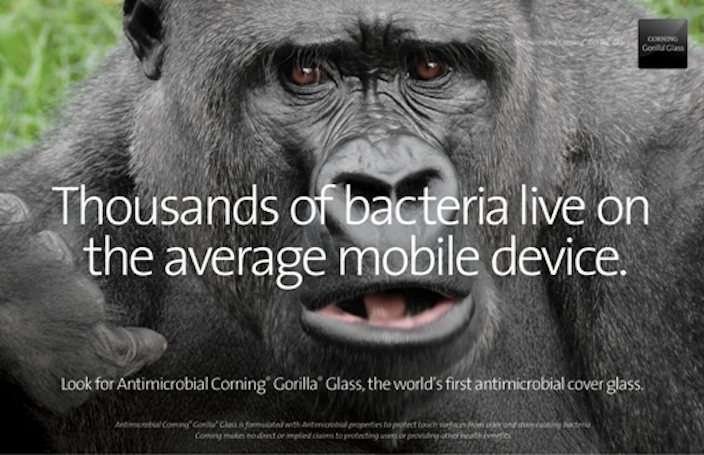 In an effort to combat spreading germs and bacteria through sharing smart phones and touch screen devices, Corning announced today plans to produce a Gorilla Glass variant with an antimicrobial surface for inhibiting bacterial growth. This version of Corning Gorilla Glass is made up of an antibacterial agent and contains levels of ionic silver that sustains the germ fighting capabilities through the life of the surface, according to the company.

Corning notes its antimicrobial glass is the first of its kind to be registered with the Environmental Protection Agency, and is currently “being tested with numerous manufacturers for various applications.”

“Corning’s Antimicrobial Gorilla Glass inhibits the growth of algae, mold, mildew, fungi, and bacteria because of its built-in antimicrobial property, which is intrinsic to the glass and effective for the lifetime of a device,” said James R. Steiner, senior vice president and general manager, Corning Specialty Materials.

The announcement comes just days after the company shared plans for producing 3D-shaped Gorilla Glass for curved displays, something of which we suspect future iOS devices could take advantage. As for Corning’s germ-fighting display technology, the company says it’s proven to be produceable at scale so hopefully we see this innovation on future devices sooner than later.