Dandy, a new Waterloo-based startup that crowd-sources the development of mobile apps, today launched its first ever app developed by its community of contributors during the ShowStoppers CES event. The concept is a simple but unique one: apply Kickstarter-style crowd-sourcing to the development of mobile apps. Dandy, however, takes things one step further than your average crowd-sourced product campaign by allowing members of the community to contribute to the development process and earn revenue from app sales based on the level of their contributions. Here’s how it works:

Everyone has an app idea. Dandy is a launch pad for great app ideas and a graveyard for bad ones. Users dream up apps for their smartphones or tablets and our community decides which ideas should be considered for development. When an idea is chosen, our community helps in the design process by suggesting and voting on features, the user interface, name, and tagline. During development, the community beta tests the idea to ensure development meets proven standards. Then, when an app is released, the community helps distribute the app by spreading the word with friends, family, and social networks. Finally, when an app begins to generate revenue, Dandy divides profit amongst the community.

The first app developed by the community called “PictureThis” launches today on iOS (as well as Android and BlackBerry). The PictureThis app, which was first pitched as a “picture scavenger hunt” by Columbia University Engineer Student Niger Little Poole, provides users with daily photo challenges that get users to snap photos of certain places or objects and earn badges and rewards in the process. Other members of the community then contributed to the naming, tagline, features and more: 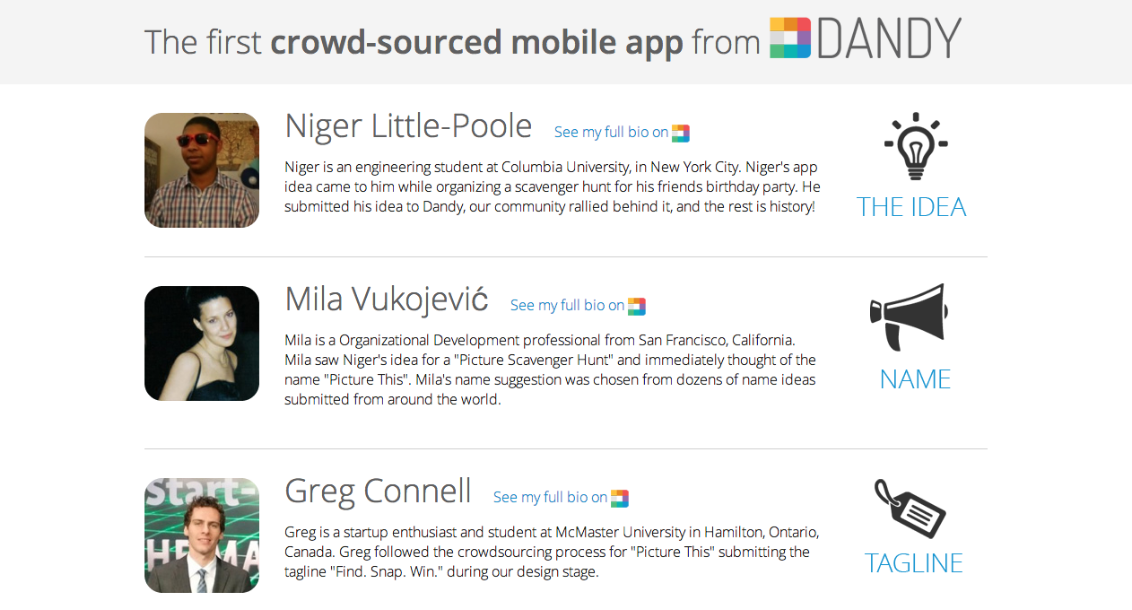 Dandy so far has raised around $350k for its crowd-sourced app development platform and the company plans to generate revenue from a fee required for app idea submissions and revenue from its cut of app sales.

You can learn more about Dandy, browse current app submissions, submit your own idea, and contribute to the beta on its website here.