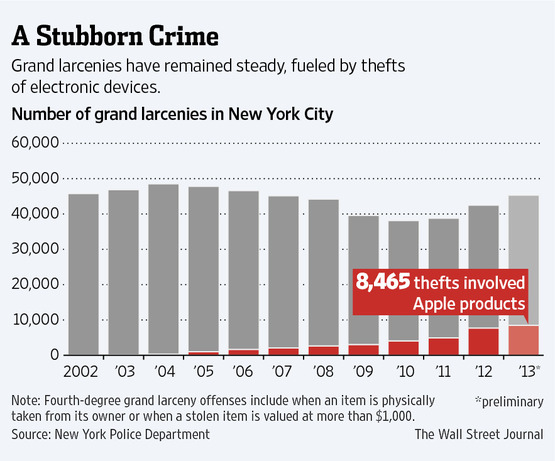 Many of the thefts happen on public transportation, where most people are buried in their devices and aren’t paying attention to their surroundings, said Joseph Giacalone, a retired New York Police Department detective. “It’s easy pickings,” he said …

Only about 20 percent of grand larceny reports result in an arrest, and of those charged, almost two-thirds result in either a dismissal or a plea-bargain to a lesser charge. Police said that solving the problem was made harder by the attitudes of many victims, who simply want to file a report but not look through mugbooks to try to identify the thief.

The NYPD encourages Apple users to activate Find my iPhone and created a YouTube video with directions. The department also has a program where people can register their electronic devices at the local precinct, making it easier for police to return it if it is recovered.

Today’s Apple devices are, however, better protected than most. In addition to Find My iPhone, iOS 7 also introduced Activation Lock. When a phone is stolen and remotely wiped by the owner, it cannot be reactivated without entering the original owner’s Apple ID and password, making it useless to anyone else.

NYPD went as far as handing out leaflets encouraging people to upgrade to iOS 7 to take advantage of this feature. So long as you are running iOS 7 and have Find My iPhone switched on (in Settings > iCloud), Activation Lock protection is automatically on.