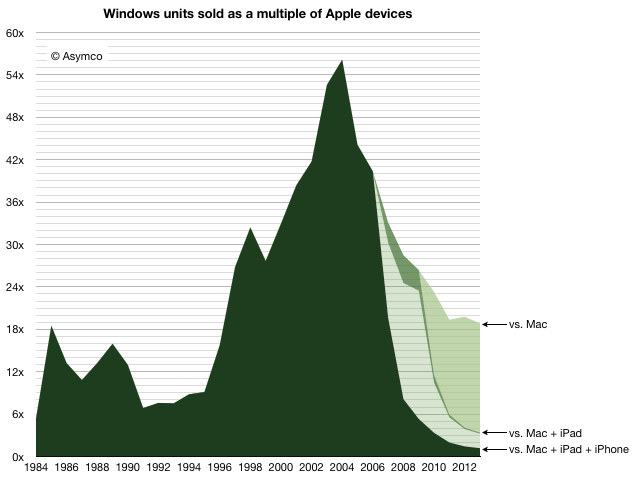 First, the iPod. Millions of people were introduced to an Apple product for the first time and fell in love with it. Suddenly, looking at a Mac made sense – if a company could make that good a job of a music player, what might its computer be like? This factor obviously increased dramatically after the launch of the iPhone, but was already well in evidence.

Second, having looked at Macs and liked what they saw, the barriers to switching were lower than they had ever been before. If accessing the Internet is the main thing you do with your PC, there’s not much new to learn when it comes to doing the same thing on a Mac.

Third, consumers stopped following the cues of business – which was overwhelmingly using Windows machines at the time – and started feeling able to make their own decisions, as laptops in particular started being seen as accessible consumer devices. Once they felt able to choose for themselves, many chose Macs.

Removing mobile devices from the equation changes the numbers, but not the trend. Peak Windows was back in 2004, where the ratio of Windows PCs to Macs was 56:1. By last year, that ratio had fallen to just 18.8:1. While there was a temporary blip in the Windows vs Mac graph around 2011-12, likely sparked by the emergence of some very sleek Windows ultrabooks, the Windows lead once more appears to be resuming its downward path.