Review: Lacie Fuel, the wireless portable drive for all your iDevices

Wireless drives have been around for a little while now. There’s the Seagate GoFlex Satellite, and the Kingston W-Drive SSD, for example. They generate their own wifi networks, and you can then stream content from them to either a Mac or, more usefully, an iOS device.

Lacie has taken that concept a stage further, by adding the ability to upload content from iPhones and iPads also, and with 1TB capacity, you’re unlikely to find yourself running short of space.

I tested it with a MacBook Air, iPad and iPhone, and was generally impressed …

Physically, the drive looks something like a cross between a standard external hard drive and a DVD drive – it’s somewhere between the two in size. It’s a typical piece of ABS plastic: doesn’t feel premium but doesn’t feel cheap-and-nasty either. There’s a loop hook which kind of gives the impression Lacie is expecting you to sling it from the outside of a backpack as you hike across country, an image its promotional video tries hard to convey. I suspect most of us would simply put it inside.

On the front is a power button and two LEDs. When you switch it on, the green power LED lights, followed by a flashing blue wifi LED as it establishes its wireless network. Once up-and-running, the blue LED goes solid. 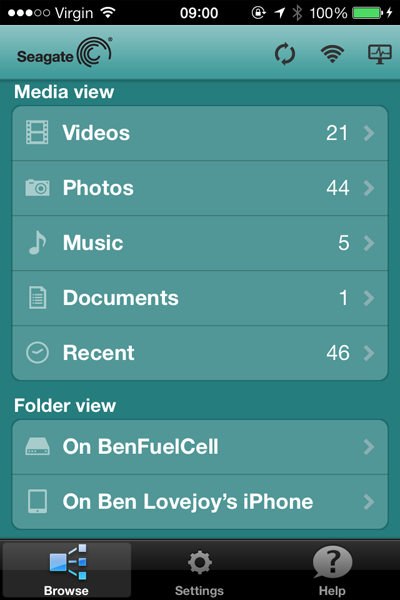 The Fuel is very easy to use. Lacie supplies it with some sample content, so you can try it out right away. Switch it on, wait for the blue LED to go solid then look for the wireless network on your device. You can rename the SSID to make it easier to identify, but the Lacie part of the default name makes it pretty obvious.

Once connected, you simply go to laciefuel.com in a web-browser or use the free Seagate Media app on an iOS device. You can then immediately start accessing the sample media.

There’s a big menu to switch between media types, making it extremely easy to use. On the iPhone, this is a full-screen menu, on the iPad it’s a drop-down menu at the top of the screen. 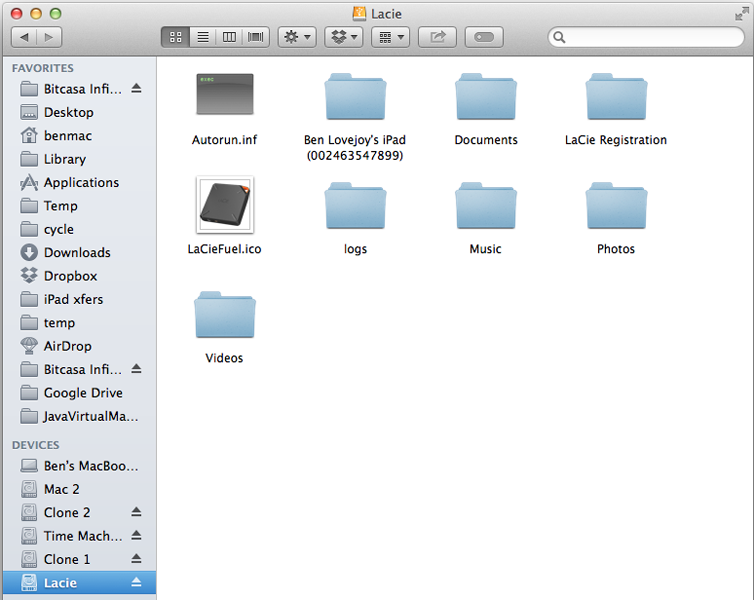 You can load content onto the drive via your browser and the wireless network, but that’s a little clunky on a Mac. It’s far easier to simply connect it via the included USB 3 cable (backward compatible with USB 2, of course). It then just appears as a standard drive and you can drag and drop content into the appropriate folders.

That much really was about as much as I was expecting from the drive in terms of uploads, but you can also upload content direct from an iOS device. Although you can only do this wirelessly, it could be very handy if you already have a bunch of movies, for example, loaded onto your iPad and want to offload them onto the drive. 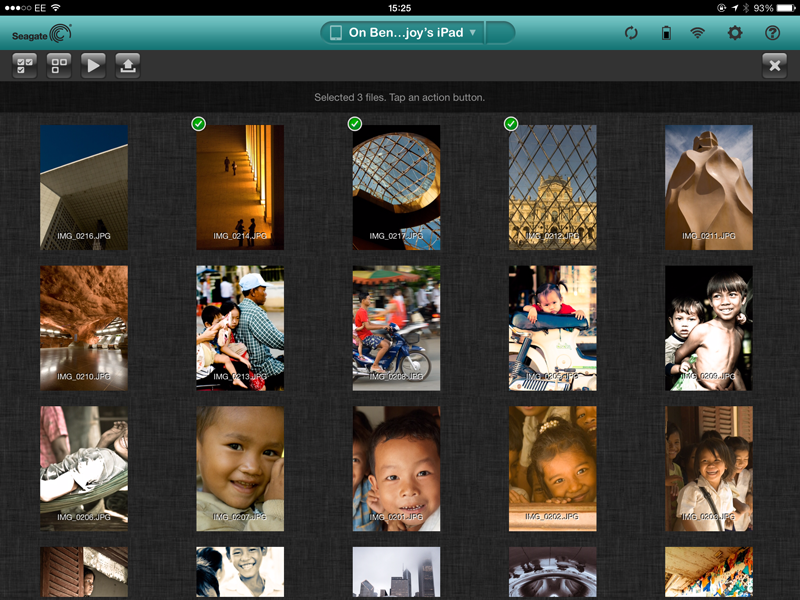 On an iOS device, you select your iPad or iPhone name from the drop-down, then you can navigate to the desired content, select the tick icon, select the files you want to upload and then touch the upload icon (fourth from the left in the above screengrab).

One major flaw is that, by default, there is no password on the drive. This means that anyone can connect to it, and not only download your content, but also upload to the drive!

The drive allows you to set a password (which I suggest you do as soon as you power it up), but really you should be asked to set this as part of the start-up process.

I did find one oddity with uploads from iOS devices, however: uploaded content gets put in a separate device folder. For example, when I uploaded some photos from my iPhone, they didn’t get added to the main Photos folder, but were instead placed in a folder Fuel created called Ben Lovejoy’s iPhone. Similarly, iPad videos were uploaded to Ben Lovejoy’s iPad. 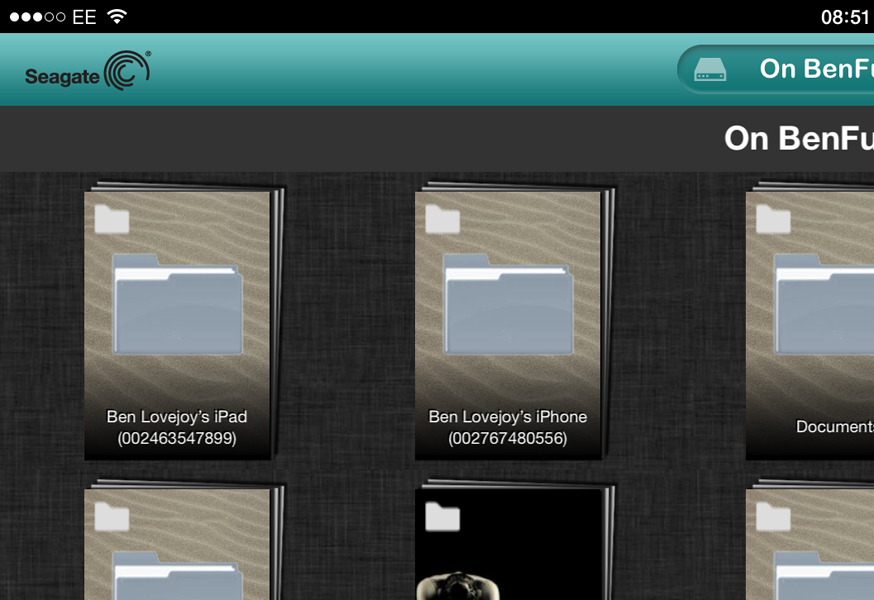 So, if you navigate by folder into the main Photos or Videos folder, the uploaded content is not there. However, if you use the dropdown menu (which is instead a full-screen menu on the iPhone), then all the content is shown.

Again, this was a pleasantly easy experience. On a Mac, you simply open a web-browser and go to laciefuel.com. On an iPhone or iPad, you open the free Seagate Media app (downloaded from iTunes). In either case, you get an iCloud-style view of your documents.

The dropdown offering quick access to videos, photos, music or documents is also very convenient – and necessary, if you have uploaded content from iOS devices, as mentioned above.

Lacie says up to five people can access the drive at once. I tested it with four devices – two Macs, an iPad and an iPhone – and all were able to simultaneously stream HD video. However, I did notice that thumbnails lagged with four simultaneous connections. 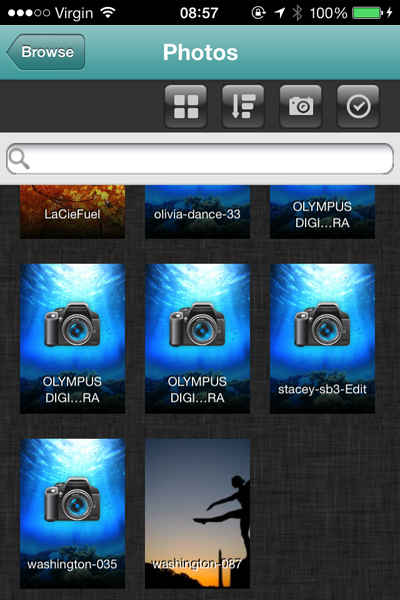 One thing I hadn’t expected was that multiple devices can also simultaneously upload content to the drive. I could definitely see times when this would be useful either professionally or socially.

Fuel effectively gives you a mobile server for when you have a group of you out of the office, perhaps in locations with poor wifi/mobile data coverage. At a party or other social gathering, you could allow everyone to upload photos to the drive to create a repository of everyone’s photos in one place, instantly. As people can also view the uploaded content immediately, I can see this as a fun way to share photos at a party.

For this type of group usage, the separate folder approach the iOS app uses could actually prove beneficial. 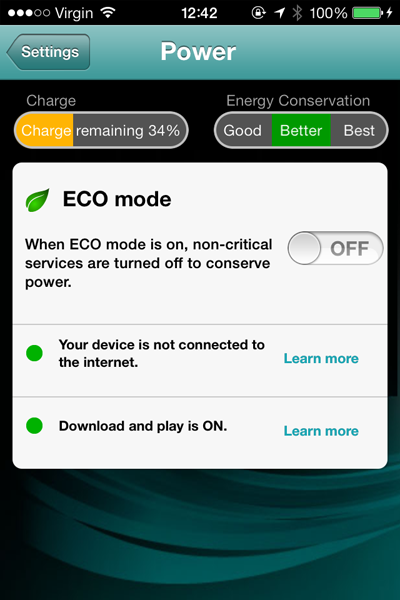 Lacie claims the drive has a 10-hour battery-life. With a hard drive, real-life performance will depend a great deal on usage, so it’s not possible to give a definitive answer on what it delivers, but certainly when I used it intermittently (but always powered-on with at least one device connected to it throughout) for a little over six hours, it was still showing 34 percent charge remaining, so I would say the claim is at least in the right kind of ballpark, and that it offers enough duration to be genuinely useful. 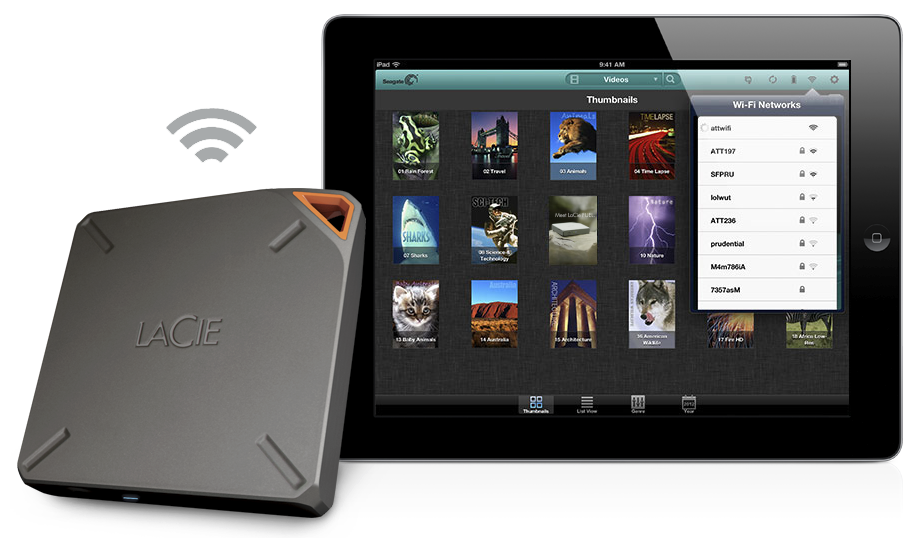 The Lacie Fuel isn’t a cheap product. You can pick up a standard 1TB portable drive from around $70, while the Fuel will cost you three times that. Even I, someone who thinks wires are evil, wouldn’t pay that kind of premium just to avoid a USB cable connection to my Mac.

But for iOS devices, it’s a really neat concept that works extremely well. Going on a trip, you can carry virtually unlimited media in something small enough to slip inside any bag and with the convenience of wireless access with multiple devices.

I can see a particular market for families who use iPads to keep kids entertained on car journeys: you could just load the drive up once with a tonne of videos and then connect their iPads to the drive during the journey, rather than having to constantly change the content on the iPads themselves.

On a holiday, you have the reassurance of being able to shoot as much video and take as many photos as you like, transferring them to the drive and then being able to delete them from your phone to create space for new ones (though you’d then have just a single copy).

My only real complaint is the flakiness of the Internet connection relay, something we found with the older Seagate product too. Given the frequency with which it drops out, it isn’t realistic to use it as a portable router, and without that you do have to switch back-and-forth between wifi connections depending on whether you want to access the drive or the Internet. But that aside, I was impressed.