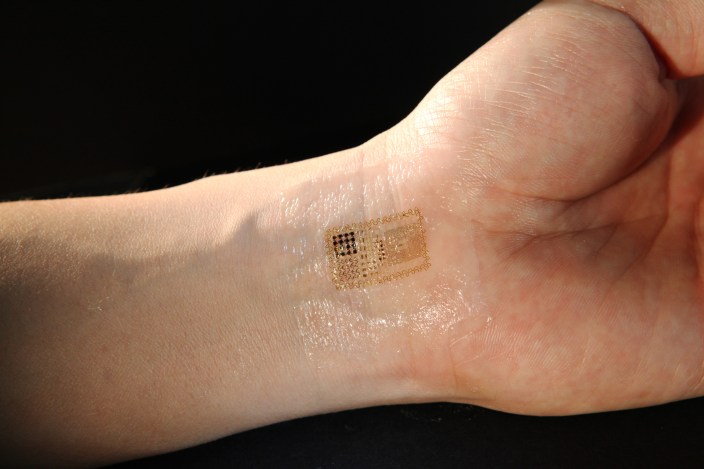 <a href="http://componentstoday.blogspot.com/2011/09/new-medical-devices-sensor-tattoos.html">Example</a> of biomedical industry’s work on blood sensors

Apple is moving to expand its personnel working on wearable computers and medical-sensor-laden devices by hiring more scientists and specialists in the medical sensor field. Apple began work in earnest on a watch-like device late last decade, and it has worked with increasing efficiency and more dedicated resources on the project over the past couple of years. Last year, we published an extensive profile that indicated Apple has hired several scientists, engineers, and managers in the field of biomedical technologies, glucose sensors, and general fitness devices…

Over the past couple of months, Apple has been seeking even more engineering prowess to work on products with medical sensors. Earlier this year, two notable people from the medical sensor world joined Apple to work on the team behind the iWatch’s hardware vision. Apple has hired away Nancy Dougherty from startup Sano Intelligence and Ravi Narasimhan from general medical devices firm Vital Connect. In her former job, Dougherty was in charge of hardware development. Narasimhan was the Vice President of Research and Development at his previous employer. 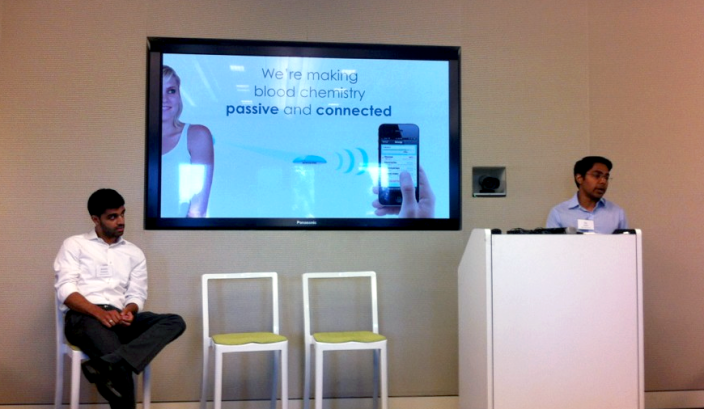 Dougherty’s work at Sano Intelligence is incredibly interesting in light of Apple’s work on wearable devices, and it seems likely that she will bring this expertise from Sano over to Apple. While Sano Intelligence has yet to launch their product, it has been profiled by both The New York Times and Fast Company. The latter profile shares many details about the product: it is a small, painless patch that can work on the arm and uses needle-less technologies to read and analyze a user’s blood.

The needle-less, sensor-laden transdermal patch is painless (I handled a prototype, which felt like sandpaper on the skin) and will soon be able to monitor everything you might find on a basic metabolic panel–a blood panel that measures glucose levels, kidney function, and electrolyte balance. Already, Sano’s prototype can measure glucose and potassium levels. There are enough probes on the wireless, battery-powered chip to continuously test up to a hundred different samples, and 30% to 40% of today’s blood diagnostics are compatible with the device.

With the technology for reading blood able to be integrated into a small patch, it seems plausible that Apple is working to integrate such a technology into its so-called “iWatch.” For a diabetic or any other user wanting to monitor their blood, this type of innovation would likely be considered incredible. More so if it is integrated into a mass-produced product with the Apple brand. Just like Apple popularized music players and tablets, it could take medical sensor technology and health monitoring to mainstream levels.

Earlier this week, Google entered the picture of future medical devices by announcing its development of eye contact lenses that could analyze glucose levels via a person’s tears. This technology is seemingly far from store shelves as keeping the hardware in an eye likely poses several regulatory concerns. By putting similar technology on a wrist or an arm, perhaps Apple will be able to beat Google to market with this potentially life-changing medical technology. 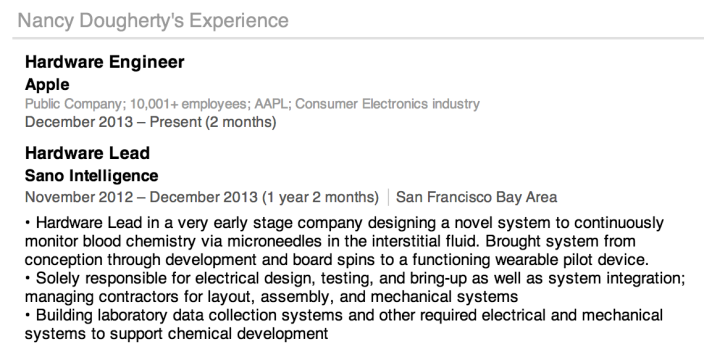 While the aforementioned work by Dougherty occurred at Sano Intelligence, the fact that she “solely” developed this hardware means that her move to Apple is a remarkable poaching for the iPhone maker and a significant loss for a small, stealth startup. She notes her involvement at Sano on her LinkedIn profile (which also confirms her new job at Apple):

– Hardware Lead in a very early stage company designing a novel system to continuously monitor blood chemistry via microneedles in the interstitial fluid. Brought system from conception through development and board spins to a functioning wearable pilot device.

Dougherty’s work at Sano Intelligence was not her first trip in the medical sensor development field. Before joining that company, she worked on “research and development for an FDA regulated Class I medical device; a Bluetooth-enabled electronic “Band-Aid” that monitors heart rate, respiration, motion, and temperature” for another digital health company, according to her publicly available resume. 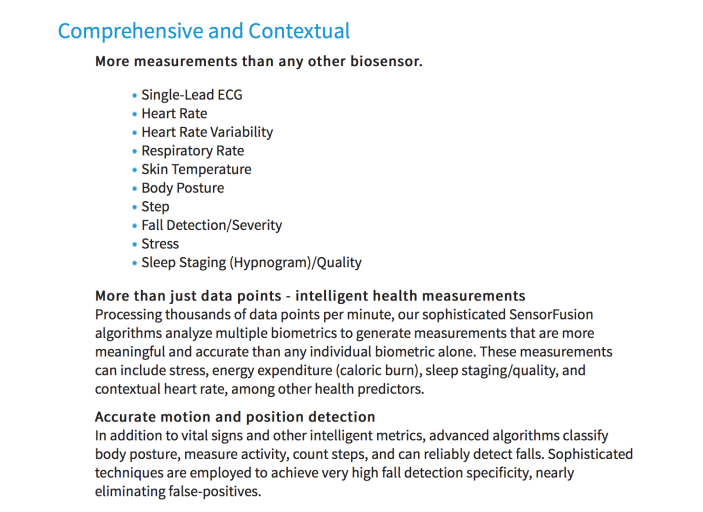 At Vital Connect, Narasimhan was a research and development-focused vice president. As Vital Connect is a large company, it is unclear how responsible Narasimhan actually was for the hardware development, but it is clear that he has expertise in managing teams responsible for biosensors. Their sensor can be worn on the skin (usually around the chest area) and is able to monitor several different pieces of data. As can be seen in the description from Vital Connect (above), their technology can measure steps, skin temperature, respiratory rate, and can even detect falls. These data points would be significant compliments to a wearable computer that is already analyzing blood data.

Besides his management role at Vital Connect, Narasimhan comes to Apple with over “40 patents granted and over 15 pending,” according to his LinkedIn profile. Many of these patents are in the medical sensor realm, and this demonstrates how his expertise could assist Apple in its work on wearable devices. Narasimhan has patents for measuring the respiratory rate of a user, and, interestingly, the measurement of a person’s body in space to tell if they have fallen. The latter technology in a mass-produced device would likely improve the quality of life for the elderly or others prone to falling.

Of course, it is not certain that the work of either Narasimhan or Dougherty will directly appear in an Apple wearable computer or other device. What this information does indicate, however, is that Apple is growing its team of medical sensor specialists by hiring some of the world’s most forward-thinking experts in seamless mobile medical technologies.

Apple is not the only company boosting its resources for utilities that can measure blood. According to sources, other major Silicon Valley companies are racing Apple to hire the world’s top experts in blood monitoring through skin. 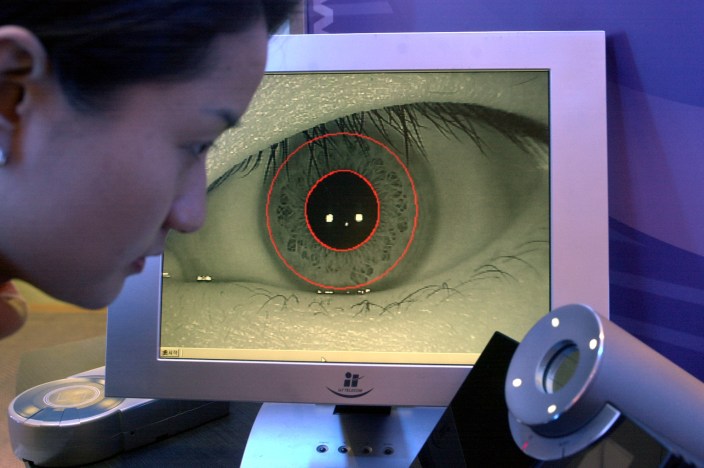 In addition to focusing on sensors that could monitor a person’s activity, motion, and blood through the skin, sources say that Apple is actively working on other biometric technologies. As we reported in 2013, Apple is actively working on embedding fingerprint scanners into Multi-Touch screens. It seems plausible that in a few years down the roadmap, Apple’s Touch ID fingerprint scanners could be integrated into the iPhone or iPad screen, not into the Home button.

Apple is also said to be studying new ways of applying sensors such as compasses and accelerometers to improve facial recognition. These technologies could be instrumental in improving security, photography, and other existing facets of Apple’s mobile devices. It does not immediately seem intuitive to have new facial and iris recognition technologies on wearable devices, so it is unlikely that those technologies will make the cut for the future “iWatch.”

While 2013 focused on improvements to Apple’s existing software and hardware platforms, Apple CEO Tim Cook has teased that 2014 will include even bigger plans. “We have a lot to look forward to in 2014, including some big plans that we think customers are going to love,” Cook told employees in December of 2013. These plans likely include larger-screened iPhones and iPads, updates to iOS and OS X, and sources are adamant that Apple will revamp its television strategy this year. But is an iWatch in the cards of 2014? Only time will tell. Regardless of when the product is planned for launch, it appears that Apple is stacking up its resources to create a wearable computer that is truly groundbreaking for the medical world, and that the company will not introduce it until it is ready.