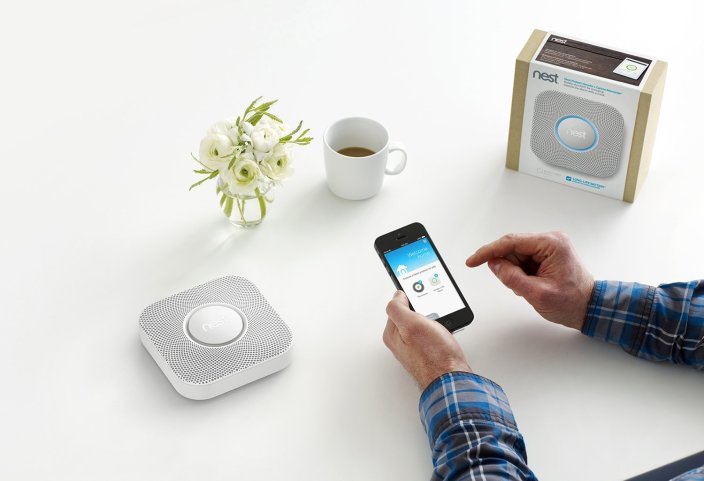 Late last September it was rumored that a smart smoke/carbon monoxide detector would join the now Google-owned Nest line of smart thermostats and was later announced in early October to a great response.

The Nest Protect, which retails for $129 in both a wired and battery powered variant, intelligently interacts with an iPhone app called Nest Home with warnings about low batteries (if applicable) and when alarms are active or about to be active. It also features a handy dismissal gesture for silencing a screaming alarm.

Some users, however, are reporting a number of unprompted false alarms unrelated to cooking or other reasonable instances. One user even reported the alarm stubbornly going off for 30 minutes in the middle of the night with no sign of smoke and ignoring prompts to dismiss the alarm after an apparent glitch in the device…

Such an occurrence could be very inconvenient, especially if the Nest Protect were to warn you of smoke or carbon monoxide presence via its app while you’re away from the home.

After two weeks of using the Protect, just before bed when the system did its nightly self-check, I heard a voice that said something to the extent that the unit had failed and it needed to be replaced. Shortly after the warning, the device started to chirp and I received a notice on my iPhone about the unit failing. It’s pretty easy to silence a false alarm, but the chirp because of a failed device cannot be silenced and it happened right before bed.

For its part, Nest has been readily replacing reportedly defective units for customers after reports of such issues suggesting it could be a hardware related issue (as a software issue would surely exhibit the same behavior), and it’s often expected that first rounds of products offer bugs and kinks. What’s not expected for users is a product designed to remove friction from a classic appliance to add more frustration on its own.

1 of my 4 Nest protect units had a false alarm last night. A little before midnight, all 4 units beeped and loudly announced “There is smoke in the entryway”. The family got out of the house and I tried to find the source of the smoke. There was none. I brought everyone back in, scared, as the alarm continued and attempted to wave the alarm off. No response. I finally got a broom out, just like the commercial and pressed the button. “This alarm cannot be silenced”.

We’ve reached out to Nest for comment on the reports of false alarms experienced by customers and will update if we hear a response.

Could a firmware update resolve the issue for existing users? Have you experienced any false alarms yourself? Sound off in the comments below.