Snapchat comes to the Mac with unofficial “Snapped” beta client, but don’t expect a complete experience just yet 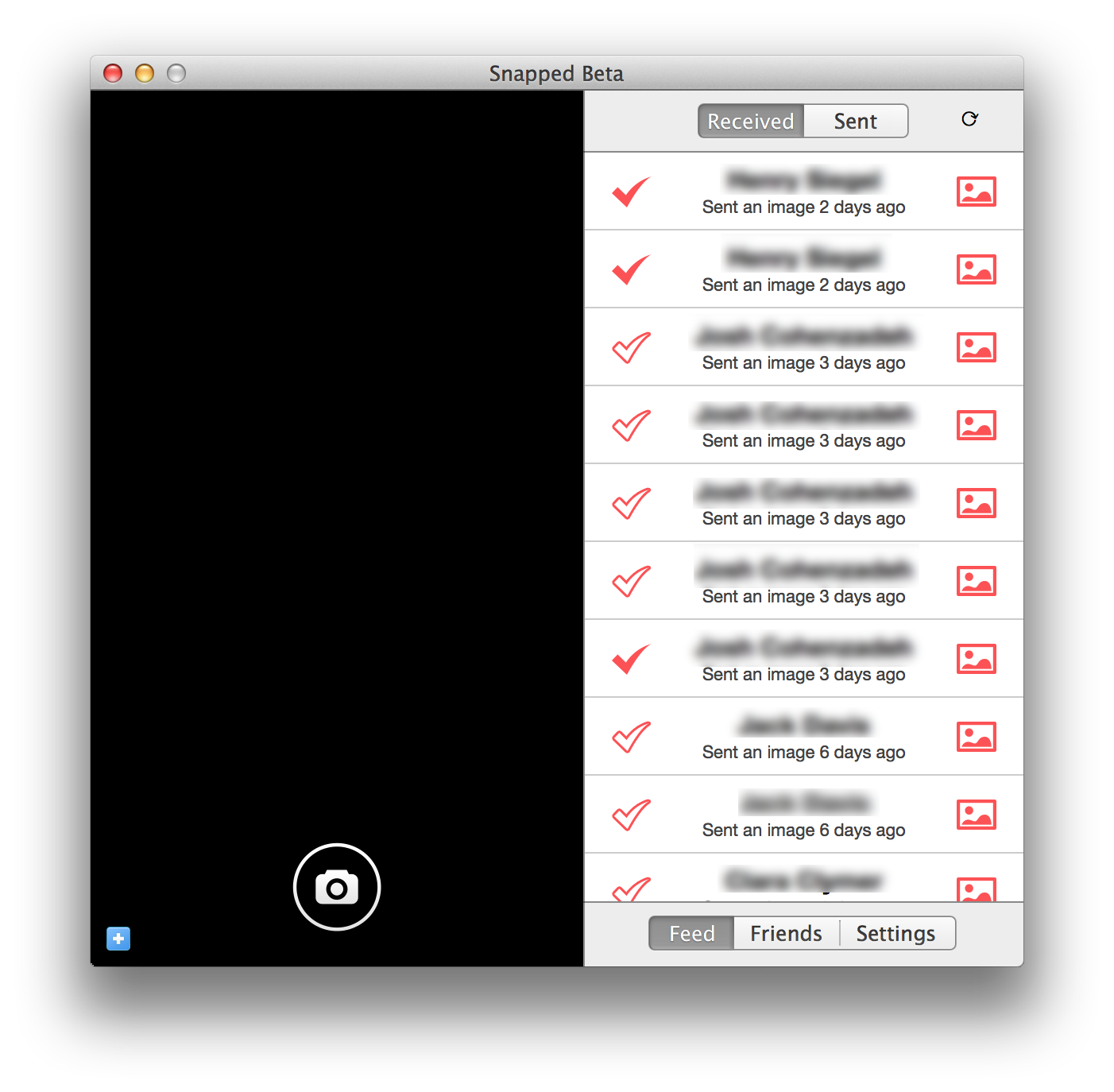 Since the app’s release, Snapchat has only been available for smartphones. An official desktop client has never been created, and due to the nature of the app, it doesn’t seem like one ever will. That’s not to say you’ll never be able to send snaps from your Mac, though

A new app called Snapped was released to the public as a private beta today. It’s a Snapchat client for the Mac, but as a third-party client, the app is subject to certain restrictions and limitations that the official mobile client doesn’t have to deal with.

So what’s in the beta? Keep reading for a full breakdown. Just keep in mind that since this is a beta, it could undergo substantial changes as the development progresses.

The basics of Snapchat are all present in Snapped. You can create new snaps, send them to your friends, and read snaps sent by your contacts. There are a few changes to how this works though. For example, with Snapped you can re-view snaps as many times as you want. The same time limit set by the sender still applies, but once the time as run out you can simply click the snap to view it for another ten seconds (or whatever time limit was set).

Sending snaps works in basically the same way as on the mobile app. You take a photo, choose a contact, and select a time limit. Certain things you might be used to on the official app aren’t available in Snapped, though. You can’t add a caption, draw on the image, or change any of the other settings aside from the time limit—at least not natively. Because Snapped supports choosing an existing image from your computer, you can edit a photo to your heart’s content in any photo editor and send it via Snapped.

The most important limitation you’ll run into relates to how Snapchat handles logins. For some reason, logging into your account through Snapped causes the iPhone app to be logged out, and logging back in through the iPhone app causes Snapped to be logged out. If you leave one app running and login through the other, refreshing the first app will cause it to jump back to the login screen.

A few other limitations apply, likely due to Snapchat not allowing access to the data required to make them work. You can’t edit your friends list from within Snapped. There is also no support for push notifications on the Mac. Instead, you’ll have to manually click a refresh button within the app.

But Snapped brings more than just drawbacks the photo sharing service. There are a few features in Snapped you won’t find in the official app. As previously noted, you can re-open received snaps even after running out the time limit set by the sender, and send any image from your computer, not just a photo taken on the spot.

Aside from those features, you also have the option of marking sent snaps as read on your friends’ devices. That means if you send a snap and then have a sudden change of heart, you can click on it in the “Sent” list and make it impossible for your friends to open it. Their mobile apps will simply tell them it has already been viewed, even though it hasn’t. The reverse of this is also true: you can set Snapped to stop notifying friends (and the Snapchat server) that you opened a received snap. You can then view as many snaps as you want and your friends will never know you’ve opened them.

Snapped is still in beta, so many of the features and offerings will likely change as the development continues. Stuff will be added, stuff might be removed, and the overall functionality could get substantially better or worse.

You can grab the Snapped beta from the developer’s website if you want to take it for a spin.

Editor’s note: this post was updated after publication to reflect a change in the developer’s release plans.