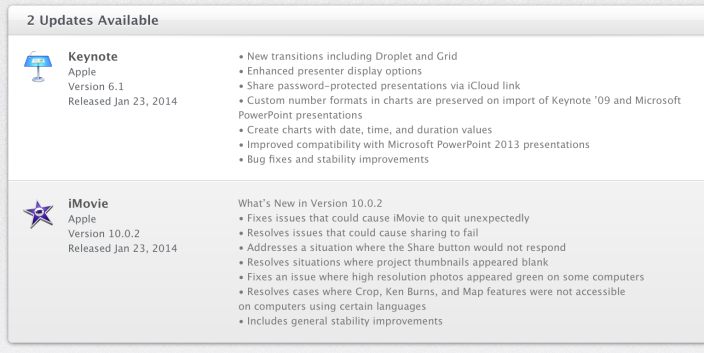 It’s software update Thursday for Apple. In addition to redesigning many elements of iWork for iCloud and tweaking Podcasts on iOS, Apple has pushed out a slew of software updates to its applications for OS X…

Apple typically rolls out iWork updates for all apps simultaneously, but there does not appear to be any new updates for the other iWork on OS X or iOS apps today. In addition to the Keynote updates, several bug fixes have been issued for iMovie 10:

• Fixes issues that could cause iMovie to quit unexpectedly
• Resolves issues that could cause sharing to fail
• Addresses a situation where the Share button would not respond
• Resolves situations where project thumbnails appeared blank
• Fixes an issue where high resolution photos appeared green on some computers
• Resolves cases where Crop, Ken Burns, and Map features were not accessible on computers using certain languages
• Includes general stability improvements