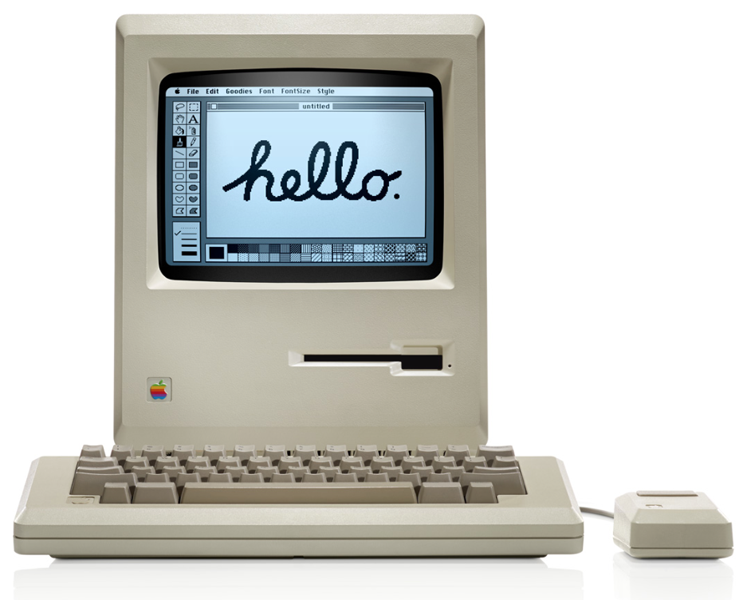 Ok, I admit it: I’m officially old. Old enough, in fact, to have bought the very first Macintosh in 1984: the Macintosh 128K.

Computers in those days had green screens and were controlled by typing arcane commands. Bold and italics did not appear on-screen, instead you saw ^Bthis is bold^B and ^Ythis is italics^Y (CTRL-Y for italics because CTRL-I was tab, for reasons no-one understood but didn’t question). You never had to worry about what typeface to use because computers could neither display nor print them.

And then came the Macintosh …

It smiled at you as it started-up. You didn’t have directory listings, you had images of folders. You didn’t type the name of an application or file to open it, you used this strange new thing called a mouse to double-click it. When you made a word bold, it appeared in bold on the screen. You had different typefaces!

It was incredible. I immediately knew this was what computers were supposed to be like. I wanted one.

I couldn’t possibly afford it. It cost the equivalent in today’s terms of $5600, just for the computer itself. The ImageWriter printer needed to print those lovely new typefaces was extra. I was in my first year of journalism, and that was a goodly proportion of my annual salary at the time.

But times were different. Apple courted journalists then, not the other around. Apple figured that if we owned Macintoshes, we’d write about them (it was right). So it offered a journalist discount. A very generous discount: 60 percent off. (We get no discounts at all now, in case you were wondering.) It was still a large chunk of cash, but I didn’t care, I had to have one: I took delivery of the seventh Macintosh to arrive in the UK. 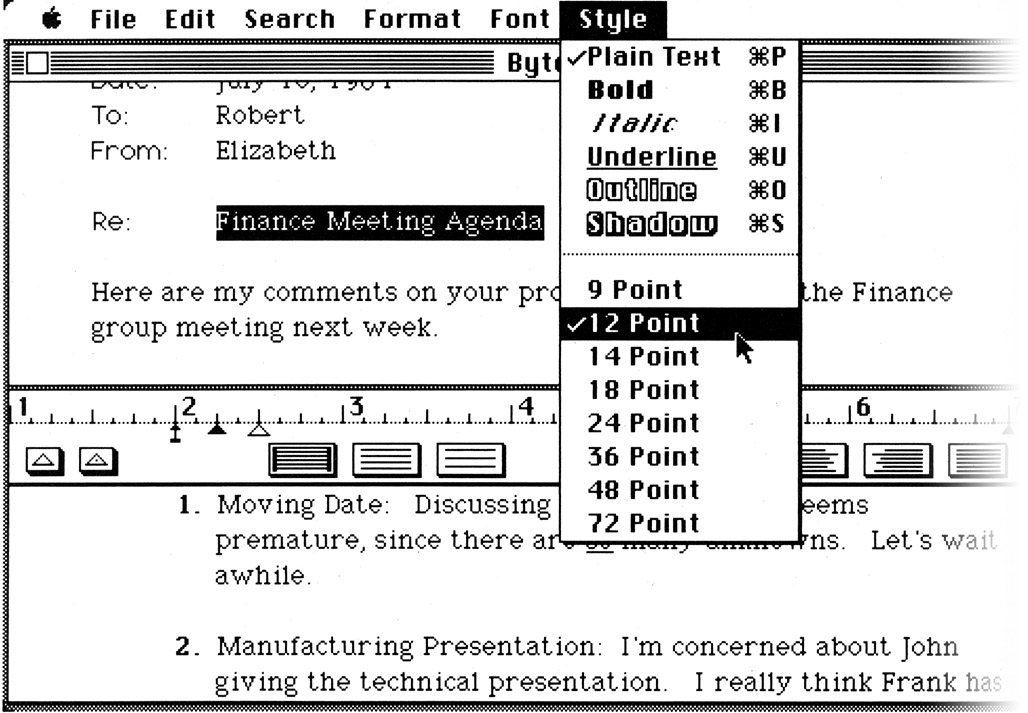 To write an article on it, you inserted the system disk to boot it up. Then you ejected that and inserted the MacWrite disk. When you wanted to save your work so far, you ejected the MacWrite disk and inserted a blank disk (which cost $18 each in today’s money, by the way). At various points along the way, the Macintosh would eject whichever disk was in the drive and tell you which one it wanted. Documents were limited to eight pages long – if you needed to write more, you continued in a new document.

I didn’t care about any of this: I loved that machine. I later had it upgraded to Macintosh Plus spec, with the maximum 4MB RAM, and sometime after that added a terrifyingly expensive external 20MB SCSI hard drive. As iFixit observes in its birthday teardown, the machine was pretty easy to upgrade once you got past those T15 screws. 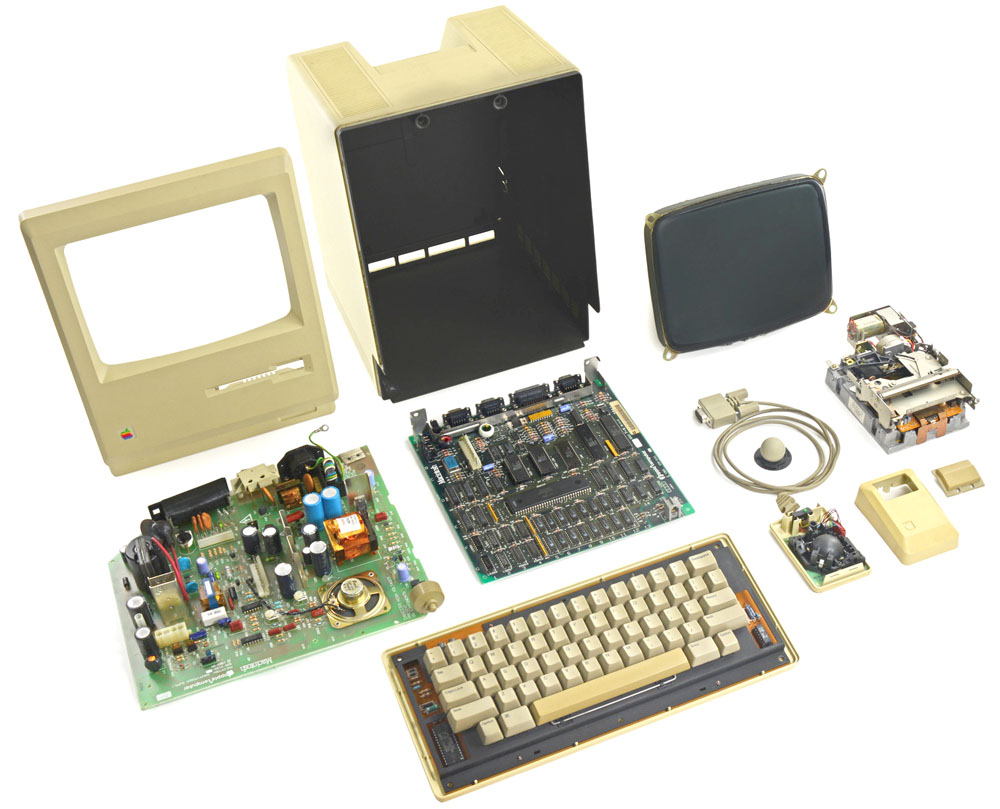 In that form, the Macintosh lasted five years in all, until I replaced it with …

The Macintosh Portable. The name was perhaps a slight exaggeration – it weighed fully 16 pounds! But I did lug it around all over the place, loved it even more than the original Mac and in fact still have it to this day. Here it is, pictured with my MacBook Air 11: 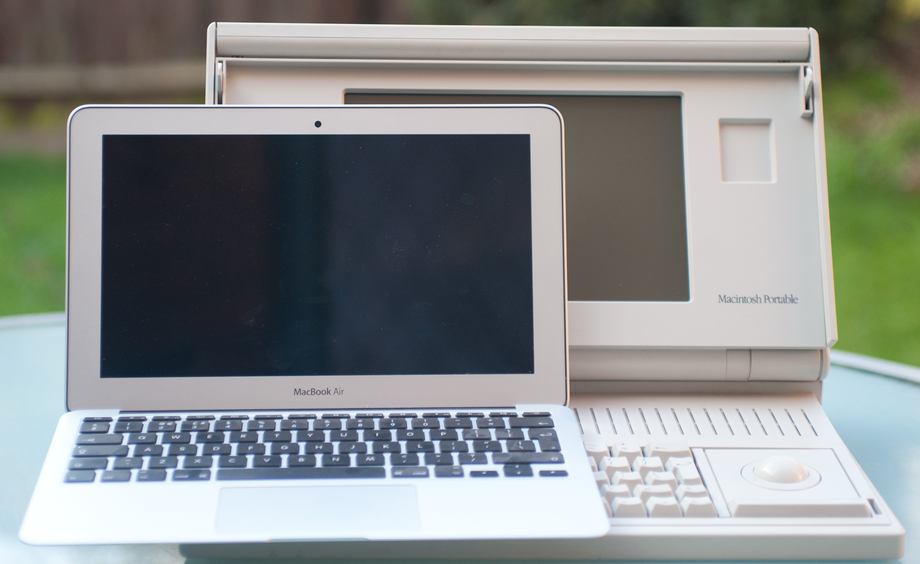 Today, I carry a MacBook Air 11 or an iPad Air that weighs so little I have to double-check I really did put it in my bag. I wonder what I’ll be carrying 30 years from now … ?