What happens when your app gets featured on ABC’s Shark Tank, the TV show where rich investors listen to pitches from wannabe entrepreneurs looking to raise funds? For app developers Egos Ventures it means shooting up hundreds of spots on the App Store charts to become the top paid app in the store overnight. The developers behind the hands-free panorama app called Cycloramic were able to capture a $500k investment from two of the Sharks on last night’s episode. We spoke to the developer who appeared on the show last night, Bruno Francois, to find out a little about the experience and get some stats on downloads following the investment.

We first told you about Cycloramic back in 2012. It was the first app (and the only) capable of taking hands-free 360-degree video by using the iPhone’s built-in vibration motors to spin the device. The developers had interest from all of the Sharks and ended up taking a $500K investment at a valuation of over $3M — even more than the company was asking for initially. You’ll notice Bruno tells the Sharks that the app has around 600k downloads in the clip above. Since filming the episode and getting the investment back in June, the app is now at more than 8 million downloads not including the influx of downloads following the episode airing last night. It appears that the Shark’s investment is paying off.

We spoke to Bruno following the show last night. He was able to give us some numbers on download activity (around 100k in an hour) and spoke about the overall experience:

I would have never imagined the immediate impact the Shark Tank had on the download and the website. We saw a little increase in activity shortly before the show as the companies and preview were announced. As soon as our segment started, the downloads skyrocketed (10s of thousands in a few minutes).  a lot more than the website hits. We pass 100K download within the hour.  By the next App Store Ranking period we went from overall ranking #800 to #2 for the Cycloramic Pro Version and from #220 to #1 for the Cycloramic Studio.
Also our new selfie360 app did 30K downloads and went from no ranking  to #7 in the Photo Category. 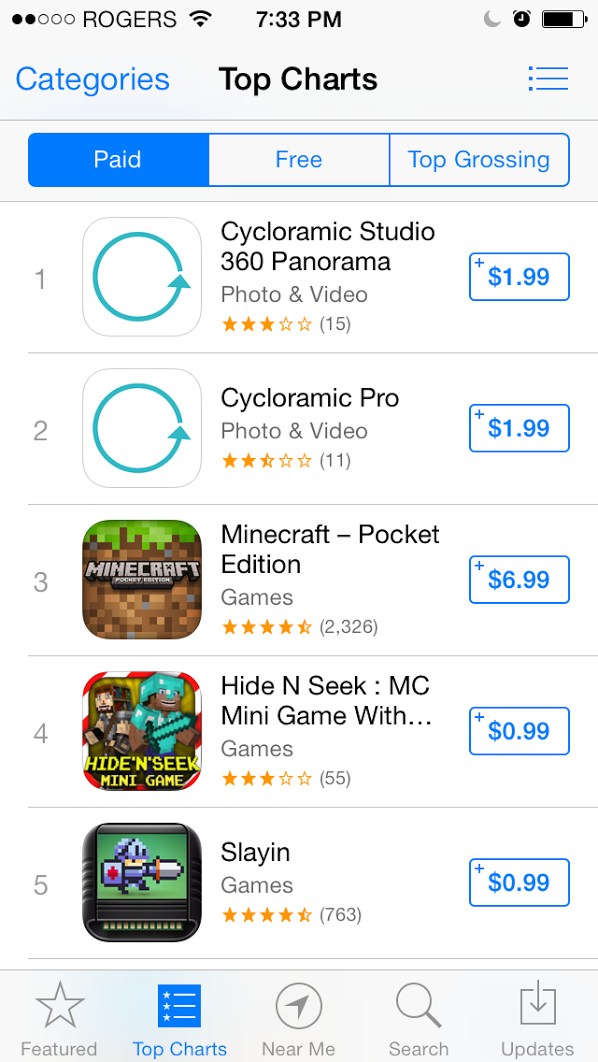 I’m interested in hearing about the application and audition process for the show. Can you talk a bit about when you first got involved with the show and what the auditioning process consisted of?

I auditioned for Shark Tank in April 2013. Once I had passed through this round, I was asked to send numerous audition videos to the production team. After my video was selected I did a live demo in front of producers for final approval. I then taped the next day (June 2013)

Did you get to talk with the Sharks before shooting the show?

No, the sharks are never in contact prior to the show. They don’t even see the applications. When you pitch it is the first time they have heard of you.

Cycloramic’s already been available for over a year and has over 7 million downloads. Was the goal of going on the show to raise the money, or more for the exposure? Were you having trouble raising the money before the show?

It was a little bit of both, and making contact with good potential partners.  We never raised money before

Along with your appearance on the show you’re launching the new Selfie app. Did the Sharks buy into Egos Ventures or just the Cycloramic apps?

They bought into Egos Venture. Selfie360 is our latest app. As we are currently working on a 3d scanning app for a business application, we decided to adapt it to a currently hot topic: selfies. We called it selfie360.

Regular selfies are dull: One flat photo, one angle. With selfie360, your selfies are brought to life in 3D animations, to show yourself in 3D or in a full 360 degree panorama of your surroundings. Selfie360 lets you take 3 types of Animated Selfies:

– The Portrait Selfie is an animated 90 degree rotation of your portrait.
– The Panorama Selfie:  You are at the center of the scene, and the panorama scene rotates around you.
– The Full 3D Selfie is a 360 degree 3D animation of someone or something.
– and the HANDSFREE selfie (coming soon)

What was the process of closing the deal following the show?

Pretty long process, but the sharks are well organized and it went pretty smoothly.

On the show you mentioned 660k total downloads, but the iTunes page for Cycloramic says 7 million downloads. What’s the difference between those numbers?

Following the episode of Shark Tank airing you’ve increased one of the Cycloramic apps from $0.99 to $1.99. Can you talk about that decision?

This is all based on download and ranking.  It seems that $1.99 is a very reasonable price for this app compared to other photo apps. We run specials all the time so it could be back to $.99 tomorrow and even Free during the week-end.

What’s the next step for the company and how will the Sharks that invested be involved?

We have a few projects coming including some business app we are developing.

What Egos Ventures and the company’s Shark backers will do with the $500k investment is yet to be revealed, but Cycloramic is already reaping the rewards from the new partnership. There are two versions of Cycloramic: Cycloramic Studio 360 Panorama and a pro version that supports high resolution modes and more. The apps are currently #1 and #2 on the App Store Paid Top Charts and both selling for $1.99. The developers are also launching a brand new free app  called Selfie 360 that lets users create animated, 3D and panoramic selfie shots.
We’ll have the total count for Cycloramic’s downloads tomorrow for a 24 hour period following last night’s episode and will update the post.