Will Apple use some sort of ‘pie in the sky’ battery tech for the iWatch? 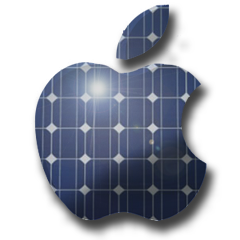 We discussed all of the information we had on Apple and Solar products last week, noticing a lot of jobs, patents, and other clues that could indicate the company is readying solar powered products, perhaps even in the iPhone 6 due later this year.

There have been Mobile-Solar Apple Jobs that have vanished after discovery, tons of patents, trial rumors and of course the Solar effort/expertise on Apple’s Data Centers and new Campus 2 building. This week, Seeking Alpha has a highly speculative piece by Matt Margolis suggesting that the evidence may be mounting for the iPhone 6 being the product Apple uses to bring the Solar idea to market.

Before we get too far into the speculation, it is worthwhile to note that the surface area of an iPhone would hardly be enough to keep a charge let alone recharge a phone even with the most efficient solar technology in labs today. However, all of the evidence weighed together might make you forget all of that ‘science’

Author Ad Placeholder
Will only appear on redesign env.
Today’s New York Times picks up the baton though and talked to former Apple executive Tony Fadell who is now one of Google’s top hardware folks:

Mr. Fadell, who is often referred to as “one of the fathers of the iPod” for his work on the first version of Apple’s venerable music player, said Apple tried for many years to build a smarter battery by adding solar charging to iPhones and iPods. But the method never proved practical, he said, because mobile devices often stay inside pockets when people are outdoors, and indoor artificial light generates only a tiny amount of energy.

..they have continued to experiment with solar charging, two people who work at the company said.

The Times guesses that Apple may use solar in a watch, somehow getting enough energy out of a small surface worn on the wrist under a sleeve.  They go on to postulate that Apple could use the motion of your arm or wireless charging tech or some other charging method to get power to the watch.

Me? I don’t buy any of these pie in the sky ideas. These don’t feel like informed sources and it feels like a lot of guessing going on. My money is on Apple optimizing everything from the battery to the chips as much as science will allow and then putting a super efficient OS on top of it and eeking out a full day’s power– which is the gold standard.

It’s not all guesswork though.

For its wristwatch, Apple has been testing a method to charge the battery wirelessly with magnetic induction, according to a person briefed on the product. A similar technology is already used in some Nokia smartphones — when a phone is placed on a charging plate, an electrical current creates a magnetic field, which creates voltage that powers the phone.

I could believe Apple would do some form of inductive charging, like what many of us use to charge our toothbrushes and other household items.

Apple is good at taking the latest scientific breakthroughs and putting them to use in novel ways but they’ve never done anything that physically hasn’t been shown in the lab before.  I don’t think that’s going to start with the iWatch.

We previously ran down all the health and fitness functionality we expect to show up in the iWatch.