Earlier this year, we learned that Apple is “aggressively” pushing to make the facility operational by February 2014 and that the building would produce a “critical” and “new” sub-component for future Apple devices. Due to the vagueness and secrecy surrounding Apple and GT Advanced’s plans, there has been little to no confirmation regarding what exactly the partnership will yield for future Apple products.

But, thanks to new documents and information that we have uncovered with help of analyst Matt Margolis, we have a clearer picture of Apple’s plans… 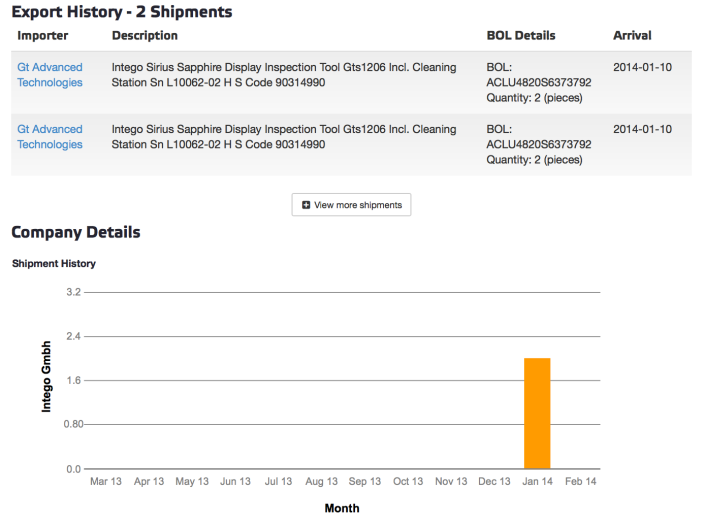 As we speculated in a previous article, it appears that Apple is planning to build sapphire-crystal displays for future iPhones. This is opposed to this facility building sapphire components for future Apple Touch ID fingerprint readers and caps for camera sensors. The proof that GT Advanced is preparing to manufacture sapphire for displays comes from import/export records. As can be seen in the image above, GT Advanced has ordered Intego Sirius Sapphire Display Inspection Tool components.

Lowering manufacturing and fabrication costs of sapphire is a key driver for accelerating the adoption of its use in new market segments such as cover screens for smartphones and mobile devices. GT Advanced Technologies is working with key downstream technology providers to optimize fabrication processes and technologies to lower the cost of sapphire cover screen material.

GT is partnering with Intego GmbH to develop a series of automated sapphire inspection tools that will increase the yield of high quality sapphire material from each boule and ensure that only high quality material enters the value stream. The SIRIUS Slab automated sapphire inspection tool begins a new level of repeatability and performance throughput to the production of sapphire material intended for high volume markets such as mobile and touch screen devices.

The machines will allow GT Advanced to ensure that the sapphire crystal displays meet high-quality standards. These machines are specific for display-grade components, not small pieces of sapphire that could be used for Home buttons or cameras.

The machines are large and can process several slabs of sapphire crystal screen covers simultaneously. Above is a drawing of the equipment.

Based on the above details from the SEC filing, Apple and GT Advanced are currently in an exclusive partnership in relation to “Consumer Electronics Products,” and this makes it unlikely that the new sapphire crystal display work could be for any other technology company’s products. 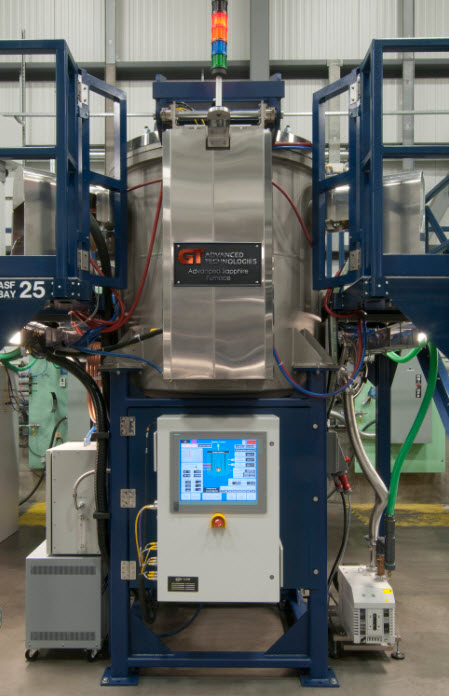 Besides the sapphire crystal display testing tools, GT Advanced has ordered several other components throughout the past few months. Most importantly, several furnaces and chambers. The sapphire furnace and chamber system is pictured above. The silver-colored metal drum is the chamber, and the entire machine makes up a completed furnace.

Both pieces work together to transform sapphire crystal material into “boules” that look like large hockey pucks. Those “boules” are then re-processed, polished, and sliced into the shapes of displays.

As of now, according to shipping documents and other data from Margolis, GT Advanced has received 518 of the pictured units, with another 420 machines on order (that have yet to be assembled). The first 518 units, according to Margolis, could build between 103 million and 116 million ~5-inch displays per year. The additional machines would nearly double that annual output with an additional 84 million to 94 million screen covers. GT Advanced has also ordered over 100 tons of graphite material to heat the furnaces.

As we’ve previously noted, sapphire crystal displays would make the iPhone’s screen much stronger and scratch resistant. The new screen could be a headline feature of the next iPhone model, which is expected to see a larger screen along with curved glass edges. We’re currently investigating some other developments regarding Apple’s plans for the Mesa, Arizona manufacturing plant, so stay tuned.