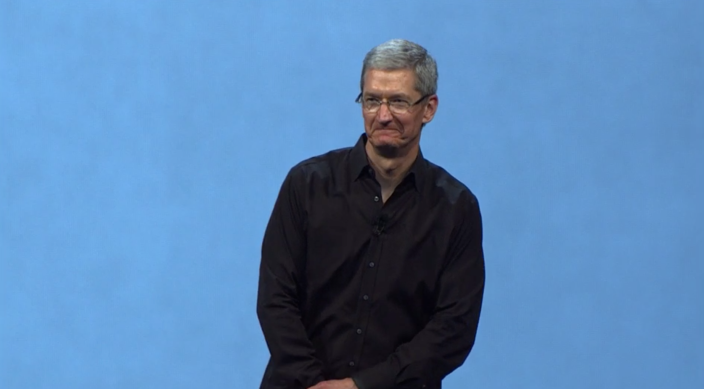 After posting excerpts last night, in which Tim Cook announced Apple’s share buyback of $14 billion in the last two weeks, The Wall Street Journal has now published the full interview with Apple’s CEO.

The interview repeats many of the comments Cook has made to investors in the past, reaffirming that new product categories under development, but does contain some new, interesting tidbits. For instance, Wakabayashi asked Cook about Google’s disposal of Motorola. Cook says he “wasn’t surprised” that Google sold it off, saying that software and hardware integration is what makes Apple unique as a company.

WSJ: What did you think of Google selling Motorola to Lenovo?

Cook: I wasn’t surprised. It seems like a logical transaction. Google gets rid of something that’s losing money, something that they’re not committed to. I think it’s really hard to do hardware, software and services and to link all those things together. That’s what makes Apple so special. It’s really hard, so I’m not surprised that they are not going to do that.

The Journal also pressed Cook on the share buyback program. Although snippets of Cook’s reply were in the article from last night, the full response puts Cook’s answers in better context.

We recognize that we have more money than we need to run our business and invest for the future and invest in new products and acquire new companies and invest in capex, etc. We fully recognized that. We even said after we more than doubled it that we’re going to look at this thing every year. And each time we do this, we go back out to shareholders and listen to them. They’re owners of the company. We’re looking at tax policy. It’s a fairly complex set of things to consider. It’s not a simple thing.

But we also wanted a program that’s flexible. We wanted to take advantage of opportunities that came our way. Those opportunities may be acquisitions. In the last 15 months, we’ve acquired 21 companies. We’re doing it low-key. We’re not making big announcements about these. It shows that we’re looking a lot. I think we’ve made smart purchases.

On bigger iPhones, Cook did not dismiss the idea. As before, Cook says that all aspects of smartphone screens need to be considered, not just the physical size. Regarding Apple’s product pipeline in 2014, Cook said that new products are under development, but stressed that they have not hit the ‘ceiling’ on their current products yet either. Clearly, Cook wants to set expectations that he does not see Apple at the end of the road for the current products. He said Apple can grow with “great improvements and new products on its existing category of products”.

He also reiterated his comments on ‘making the best, not making the most’, but qualified this by saying that market share is still a significant factor for Apple’s business.

I don’t view that as being satisfied with being small or however you want to define it. It’s not saying that market share is irrelevant or not important. I’ve never said that. I just always tried to say that the macro thing for us is to make a great product and we must do that.