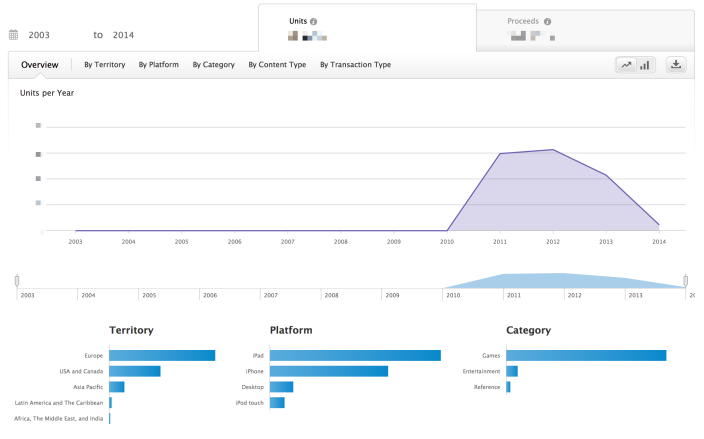 Apple today updated the Sales and Trends section of iTunes Connect, giving developers more detailed information about the origin of their apps’ sales as well as a modernized visual style.

The new update answers many of the issues developers have raised in recent years about the opaqueness of the App Store sales process. For instance, developers can now separate out sales by territory, platform, of purchase and category. This means that developers can get a better idea of how customers are finding their apps in the store. In the example above, you can see that the app was mainly found through the ‘Games’ category, with exposure in the ‘Entertainment’ category accounting for only a small fraction of total sales.

The new filtering also shows what devices customers use to buy developers’ apps. Unsurprisingly direct purchases on the iPhone and iPad appear to dominate sales through the desktop iTunes client.

The new UI also makes it possible to easily narrow results to a particular time period, by just dragging the sliders along the bottom of the page. Before, this fidelity of sales analysis could only be achieved by downloading the raw sales reports into an application like Excel or Numbers.

The update also now estimates sales in terms of dollar revenue, not just unit sales, and features a refreshed look that gels with the modern (flatter) appearance of iOS 7.