BlackBerry hits back at T-Mobile’s ‘Switch to iPhone’ offer, despite CEO’s tweeted apology 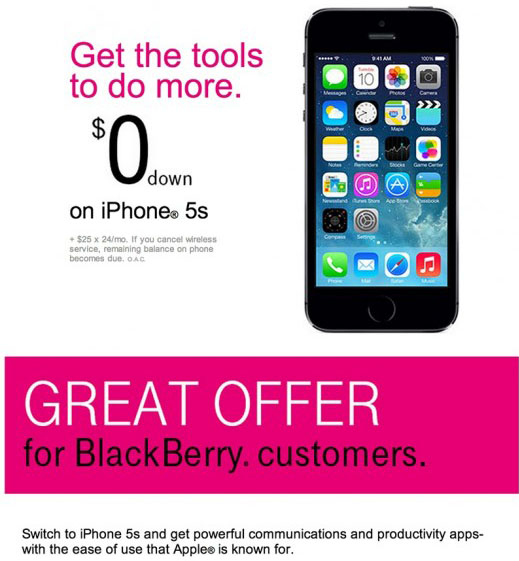 You wouldn’t think an offer to let you get your hands on an iPhone 5s with no up-front payment could cause quite so much fuss, but a T-Mobile offer aimed specifically at BlackBerry customers seems to have caused quite the controversy.

While many BlackBerry owners may have been welcomed the offer, others expressed their disappointment at what they felt to be the carrier’s lack of commitment to the future of the BlackBerry platform – and now BlackBerry CEO John Chen was weighed in with a blog post expressing his outrage …

Responding to tweets and emails from BlackBerry customers, T-Mobile CEO John Legere had already issued an apology to those upset by the offer.

BlackBerry users, I'm hearing you loud and clear. Let me work with the team and get back with you.

This was followed by two further tweets assuring customers that the carrier would continue to support the BlackBerry platform. Now BlackBerry CEO John Chen has made a blog post in which he says he is both outraged and puzzled by the offer.

Late last week, T-Mobile emailed an offer targeting BlackBerry users on its network asking them to switch their BlackBerry devices to a competitor’s smartphone […]

I can assure you that we are outraged too. What puzzles me more is that T-Mobile did not speak with us before or after they launched this clearly inappropriate and ill-conceived marketing promotion.

We suspect, however, that it’s the usual case of the unhappy ones making the most noise, while others will have quietly taken advantage of the chance to make the switch.