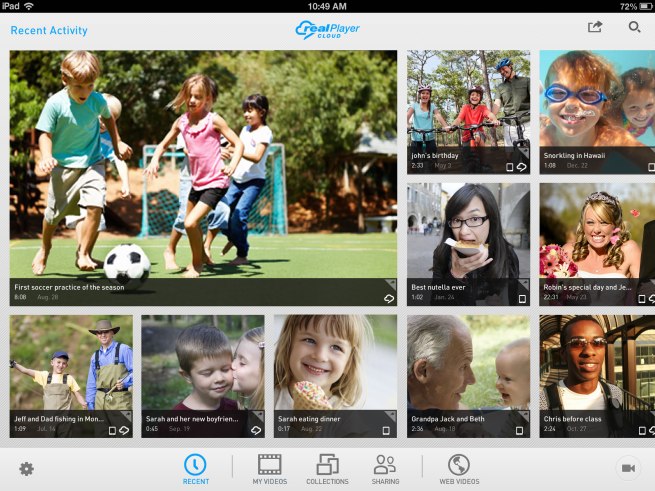 RealPlayer Cloud gives all users 2 GB of free cloud storage space. They also offer additional storage through subscription plans that start at $4.99 per month for 25 GB of data. Pricing information is available on the RealPlayer Cloud website. Currently the app is available in English, French, German and Spanish. It will soon be available in Italian, Japanese, Korean and Portuguese.

Over the past five months, RealPlayer Cloud has more than 500,000 active users in the U.S. and Canada. In a press release, Rob Glaser, founder and interim CEO of RealNetworks, said of the service’s tremendous growth: “Clearly there is a real need and demand for RealPlayer Cloud, which is essentially Dropbox for videos.”

A lot of video is captured on smartphones and tablets. However, the different manufacturers of the these devices save the videos in different formats, which might not be readable and compatible on other devices. RealPlayer Cloud helps remedy this by supporting FLV, WMV, MKV, DIVX, XVID, MOV, AVI and MP4 video formats. Each video is then reformated in the cloud by the RealPlayer service and formatted properly for the device requesting the video.

With today’s update, RealPlayer Cloud has now added a few new features. Users are now able to refer friends to the service. For every friend that signs up through your referral, you and your friend each receive an extra 1 GB of storage space. Additionally, iOS users can share links via SMS messaging and iMessage.

You can get the RealPlayer Cloud app from the App Store for free.