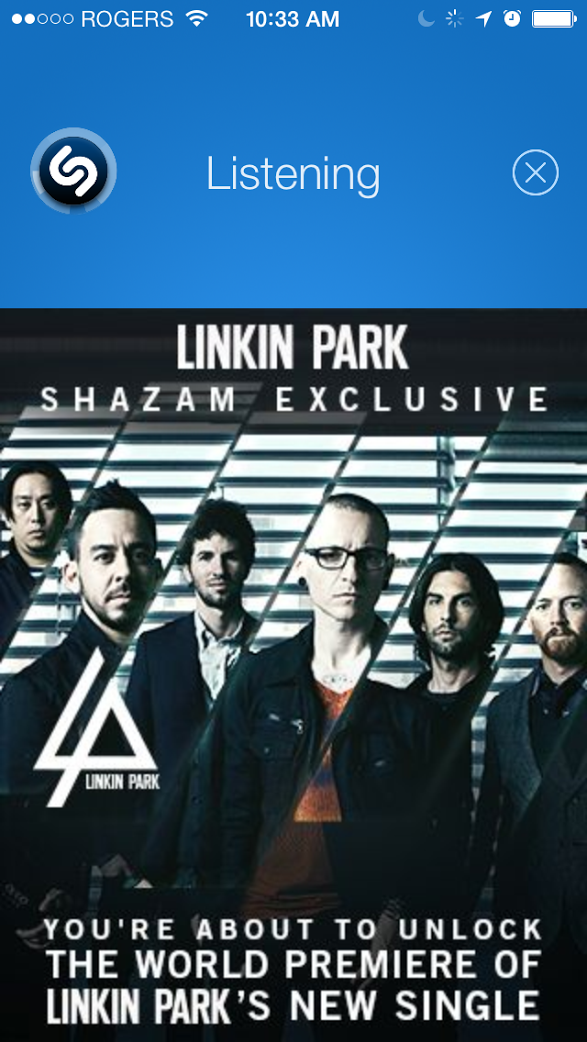 Back in February news broke that Warner Music Group made a deal with popular music recognition app Shazam that would see the label have access to Shazam’s proprietary music data gathered from its users as well as the formation of a new Shazam-branded label. Today, Shazam announced another perk of that deal with the app launching its first exclusive single, offering users the first chance to listen to the latest from Grammy Award-winning band Linkin Park before anyone else.

Shazam® today announced that multi-platinum, Grammy Award-winning band Linkin Park and Warner Bros. Records, are launching the band’s new single “Guilty All The Same” (feat. Rakim), and are giving Shazamers around the world the first chance to hear the song.  When users Shazam any song today, they’ll see a special link to hear the new Linkin Park track, then will be able to buy it from all major digital retailers after wider release Friday… Last night, Linkin Park fans who had previously Shazamed the band were treated to an exclusive opportunity to hear “Guilty All The Same” via a notification in the app’s News Feed, giving them advance access to the new single.

While the deal with Warner Music Group was originally thought to be mainly Warner’s attempt to get its hands on Shazam’s valuable user data— the data helps labels and services identify what’s popular and what music users are interested in purchasing— we see that the other end of the deal is exclusive content for Shazam. It’s unclear if the Linkin Park promotion, however, is part of the co-branded label deal that Shazam and Warner Music announced they would create as part of the original deal.

In other related music industry app news today, Spotify announced that it has acquired music recommendation service ‘The Echo Nest’, a tool currently used by many similar services such as Rdio, Vevo, and Xbox Music.

Much like Warner Music Group wanted access to Shazam’s valuable user data to help identify hits, The Echo Nest will provide Spotify with valuable data that Spotify says it will use to improve recommendations:

This deal will allow Spotify to leverage The Echo Nest’s in depth musical understanding and tools for curation to drive music discovery for millions of users around the globe.  The addition of The Echo Nest to Spotify will also strengthen Spotify’s ability to help brands and partners build amazing music experiences for their audiences.

Spotify confirmed that “The Echo Nest API will remain free and open to support its robust developer ecosystem” and that the company would continue to operate as usual.

Spotify also announced the release of a new SDK for iOS in beta today. The company says it rewrote the SDK from the ground up and has more details on its developer site.