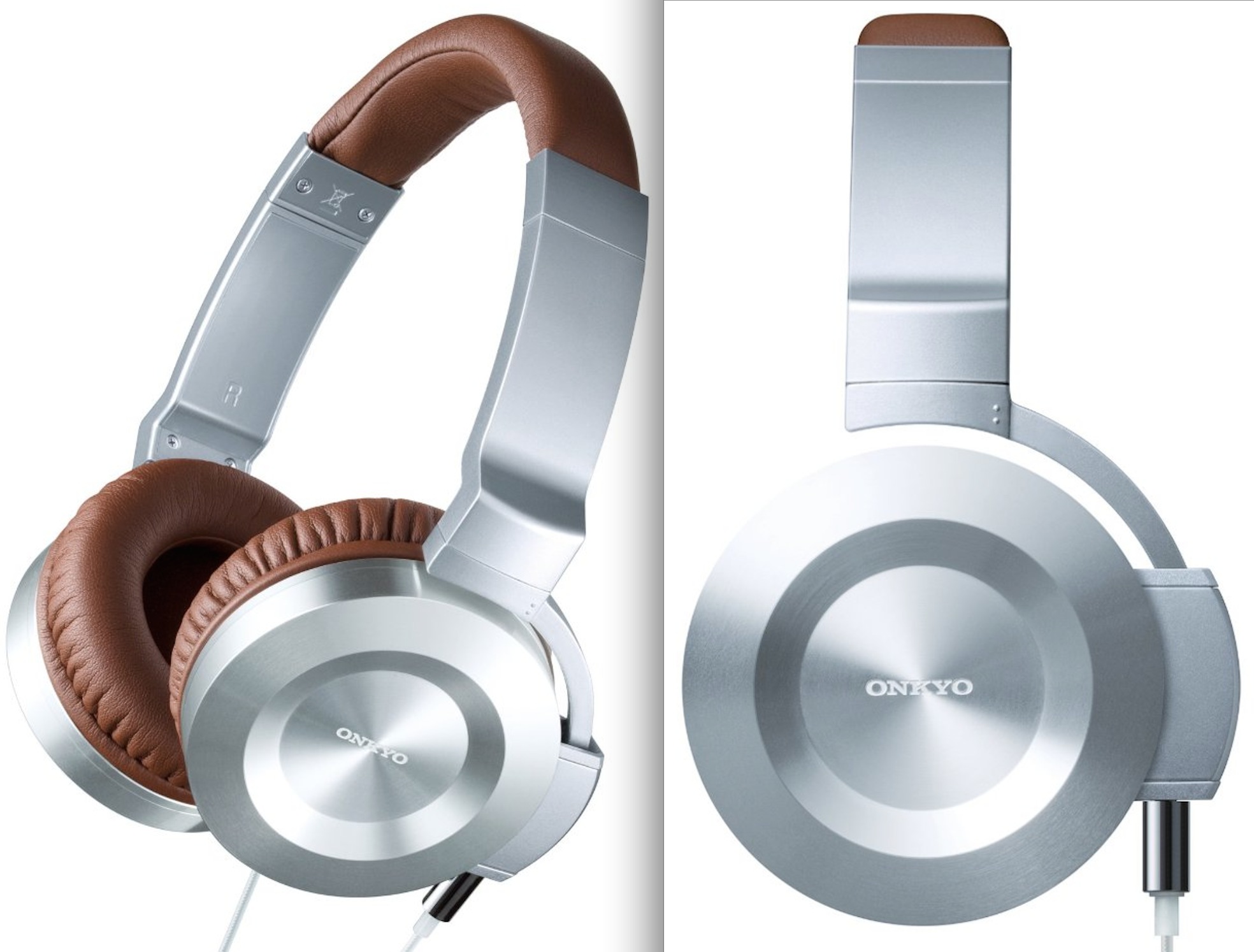 I’ve been on the search for the perfect headphones for my whole life.

Apple’s fall out of my ears if I think too hard and I even have problems keeping typical in-ear headphones in my ears when working out. Getting those weird things that go around my ears to hold them isn’t a great general purpose solution.  In-ear headphones also typically lack the depth of sound of over the ear headphones.

Unfortunately, over the ear headphones often lack the mic and iOS controls that you can easily get with in-ear headphones. Add that they are usually bulky and heavy and are too hot on the ears and you usually have a non-starter as a general purpose headset.

I got the brown and silver variety but Onkyo also makes a black version. Taking these out, they feel like the weight of plastic but actually have aluminum housings. You’ll need to connect  a proprietary cable that you plug into the headset. You can get replacements and a flat version of the cable if you desire. Other than that, you are ready to go.

Did I mention how incredibly light these are even though they are made of aluminum? You can almost forget they are on your head and you have to actually feel the cold metal to really understand that these aren’t plastic because of the light feel. The synthetic leather ear pads have memory and aren’t too hot, which, together with their low weight, makes them great for the gym or physical activities.

At the same time, these sound great to me.  I’m not audiophile but people who are seem to like these as much as I do.

Let me start with the sound signature. These do not have a big sound stage. The music isn’t playing inside your head, but it is playing right at the tip of your nose. This usually would be a bad thing for me, as I normally prefer a large sound stage. But these Onkyos make it work some how. The sound is VERY forward. Usually, it’s a forward bass with a recessed treble, or a V signature with forward lows and highs and recessed mids. But I have never heard a pair of headphones that was forward across the board. Forward highs? Check! Forward mids? Check! Forward lows? Check! It’s as if someone at Onkyo went Tom Cruise in Risky Business on us. The scene when Tom Cruise cranks up the equalizer to full. I’m actually listening to them as I write this, and I can’t find a freq range where it’s recessed. Very odd. One may ask if it is the same thing as a flat signature just at an amped up volume? The answer is a resounding no. It’s analogous to zooming in your camera. I guess you can call it a reduced depth of sound field. It’s like the Onkyo engineers set the zoom to full. Mind you, that zoomed in sound is full of very bright highs, rich mids, and timber bass. Every instrument is very well represented with only the acoustic guitar sounding a bit bright. They sound like no other headphones I own and will be a welcome addition to my collection. I am really excited to own a pair that sound so dense.

As far as powering these babies, at 32 ohms impedance, these don’t require a lot of power. Plugged in straight to my Galaxy Note 2 or Cowon, it sounds great. Add my Nuforce icon to the equation, and they sound fantastic. I also tried these with my Schiit desktop set up, and they didn’t pair very well. The vocals became overpowering. How do they overpower an already zoomed in sound? don’t ask me, but they do. So if my testing is any indicator, just a small portable amp is all that is needed.

What’s even better is that these are “made for Apple” products meaning they have the controls you are used to using if you’ve used an Apple headset. Even nicer, the mic sounds great on calls and you can move between music and a call with relative ease.

While the cable is nice and thick and doesn’t have issues with tangles, it could be a slight bit longer for my tastes. It reaches from my head to my pocket but there isn’t much extra room there. Tall folks may need to buy an extender.  Also the controls are out of eyesight below my chin so you’ll have to get to know them if you aren’t already familiar with Apple’s headphone control layout.

All-in-all, I’m a huge fan of these and can easily recommend them. They are super-light, look great, sound great, and work well with iOS devices.

The Onkyo ES-CTI300(SS) On-Ear Headphones with Control Talk for iOS Devices are $199 shipped from Amazon and other retailers.