Apple launched iOS 7.1 this morning after what seemed like an eternity in beta, making the first major update to the mobile OS since it was redesigned last year. Included in the update are several key features such as CarPlay, but also a collection of smaller tweaks and improvements that make system more convenient.

Among those features are two very important ones that haven’t really gotten enough press: huge performance improvements on the iPhone 4 and something called “HFP prompts” in the Maps application…

As anyone who has used iOS 7 on an iPhone 4 will tell you, the older hardware is nearly incapable of keeping up with the newer software. Even with the disabled visual effects and other concessions attempting to keep things running smoothly, the entire system suffered from laggy animations and other problems.

As shown the video above, via ArsTechnica, the 7.1 update has mostly resolved these issues. Animations are no longer laggy and are much quicker overall than the previous version (as is the case on all devices to some degree, but more so on the iPhone 4).

The second feature listed above is the addition of “HFP prompts” in the Maps app. You’d be forgiven for having idea what those are, given the unnecessarily technical name. This feature is designed to allow you to listen to your car’s built-in radio or other input devices while using your Bluetooth-connected iPhone for navigation.

On previous versions of iOS, if you connected your iPhone to your car via Bluetooth and used it for navigation, you would only be able to hear the audible “turn left in 400 feet” prompts if you tuned your car’s stereo to the Bluetooth input. If you were listening to an FM radio station or a CD (people still listen to those, right?), you wouldn’t hear the prompts. Take it from someone who has done that before: this is not a good way to navigate anywhere. 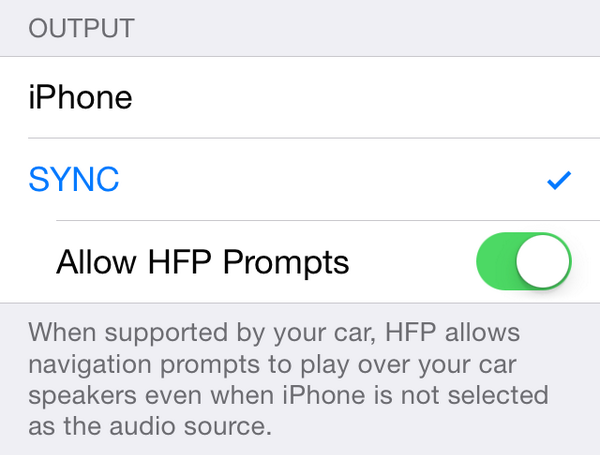 Under iOS 7.1, a new audio setting in the Maps application allows you to enable HFP prompts, which will automatically tell your car to switch over to Bluetooth when it needs to play an audible direction reminder. After the phone is done speaking the direction, it will automatically switch back to whatever you were doing earlier. Essentially it will work just like a phone call or Siri through your car’s Bluetooth system.

Below we’ve embedded a few hands-on videos featuring the new changes in iOS 7.1 so you can see them in action for yourself. ZDNet has also compiled a set of screenshots showing some of the updated interface elements.