Opinion: When will iOS evolve beyond the static grid homescreen? 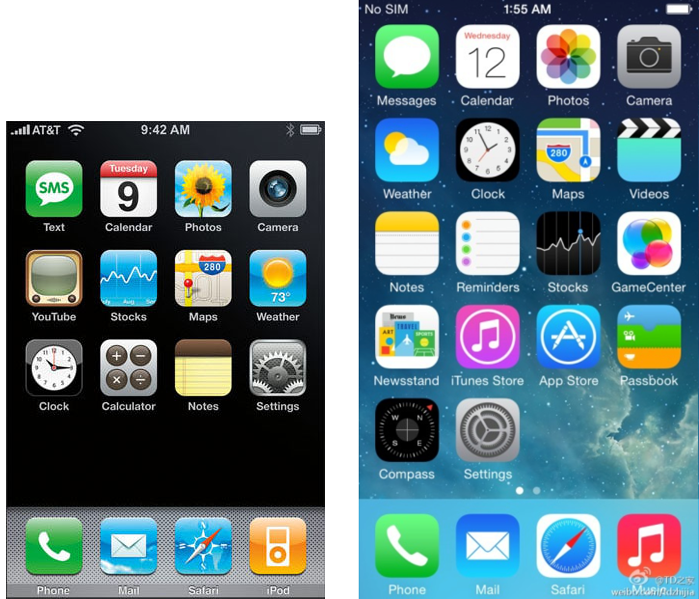 Now that we’ve had our first look at at least an early take on iOS 8, what stands out most to me is how little the basic appearance of the iOS homescreen has changed over the years. On the left is iOS 1, on the right the recently-leaked iOS 8 homescreen.

Seven years apart, yet still essentially identical in form: a grid of static icons. Looked at in one way, that’s incredibly impressive: that a user-interface that worked in 2007 still works today. But it does make me wonder at what point the iOS homescreen will move beyond this format?

Now, you can argue the question is unfair. Sure, Android may have its widgets and Windows Phone its live tiles, but one swipe down of your thumb in iOS opens up Notification Center, which is all live data. 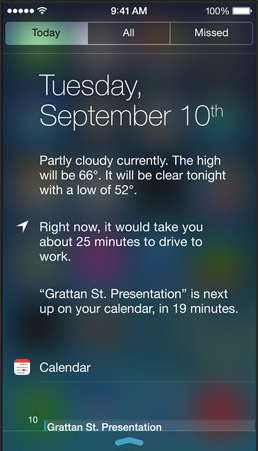 (You could also quite reasonably ask me what a complete flop of a platform like Windows Phone could possibly teach Apple – but in my view the failure of WP has nothing to do with the user-interface and everything to do with the fact that Microsoft took many years to notice that the world had gone mobile. By the time it finally woke up, it was too late.)

Perhaps there’s no particular reason for change. Apple has a long history of cautious evolution rather than radical change, and the massive success the company has enjoyed suggests that’s what its customers like.

From a usability perspective, too, it works well. Switch on your iPhone or iPad and all your most-used apps are right there in front of you. Whether you want to open an app or see your notifications, it’s one thumb press or flick away. It’s simple, quick and efficient – and if it ain’t broke, why fix it?

The evolution of iOS from 1 to 8 (based on a graphic by ios7stuff.com)

I’d argue there are two reasons to consider it. First, and I fully admit this is rather trivial, but when you’ve unlocked your phone multiple times a day for seven years and seen essentially the same thing, it gets a bit, well, boring. Isn’t that reason enough to consider something just a little bit more interesting? Isn’t that one of the reasons some people choose to jailbreak their phones?

Second, usability. Yes, iOS scores incredibly highly, which is one of the reasons so many people pay a premium for it, and I’m certainly not arrogant enough to suggest anything radical in the way of change. But let me ask a question.

So if checking live data is the primary usage, and using apps secondary, shouldn’t that be reflected in how the OS works? Shouldn’t displaying live data be the initial view, swiping that away to access our apps?

My initial thought was that the live data should therefore be the homescreen. But that still requires a swipe. So perhaps instead the live data should be on the lockscreen. Switch on the phone and instantly see your next appointment, traffic to the airport, the status of your flight, a preview of your last text message … all the things, in fact, that currently appear in the Notification Center.

That already happens in part, of course. We see the most recent notifications on the lockscreen: 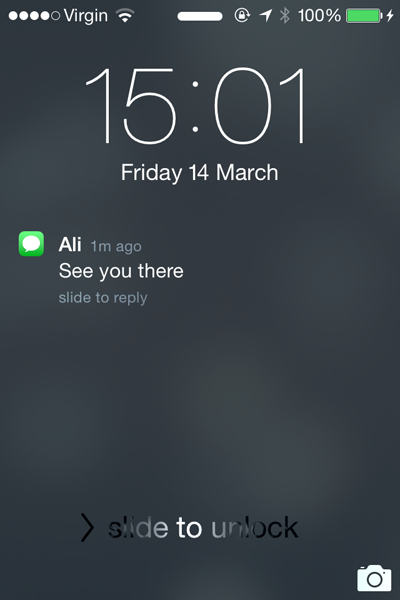 But there’s not room for many notifications there, and not all updated data gets displayed there. So here’s my thought …

Put all the Notification Center data onto the lockscreen. Make it more visually interesting, and create a more efficient layout for that information, so we can see more of it at-a-glance rather than having to scroll. Especially with the expected larger display on the iPhone 6, there’s no reason we couldn’t fit a dozen pieces of data on there in a readable form. Then unlock your phone to get to your apps, just as now. A small change that would make a big difference to both usability and appearance.

There are privacy implications to this, of course. We might not want all our alerts and data updates available to anyone who picks up our phone. But that’s just a matter of making it configurable, choosing what data does and doesn’t get displayed on it, exactly as we do with the existing Notification Center.

Am I on the right track here? Perhaps you agree that it’s time for a change, but you don’t like my particular suggestion? Or maybe you think we should leave well enough alone and keep things as they are? Let us know by taking our poll, and sharing your thoughts in the comments.