While we’re all looking back at our first tweets as Twitter celebrates its eighth birthday with its special First Tweet page, I thought it’d be fun to take a look at Apple executives’ first tweets as well; the only catch is that Apple’s leadership isn’t exactly very social.

While you won’t find Jony Ive talking design or Craig Federighi dropping hints about iOS 8 and OS X, there are a few Apple execs adding to the conversation on Twitter including Tim Cook.

First up is Eddy Cue, Apple’s SVP of Internet Software and Services, who had a rather big announcement for his first tweet in early 2007:

Next up is Phil Schiller, Apple’s SVP of Worldwide Marketing, who also made his debut tweeting about sports:

Schiller’s most notable tweet, though, is probably his shot at Android security.

And it wasn’t all that long ago that Apple’s CEO Tim Cook joined Twitter. While he’s been known to declare his love for Auburn football, his first tweet was actually about Apple (as most of them are):

As for the ousted exec Scott Forstall, the Twitter account he showed off on stage at WWDC in 2011 (seen above) exists as a ghost town, save for 57,000 followers, after once being verified. 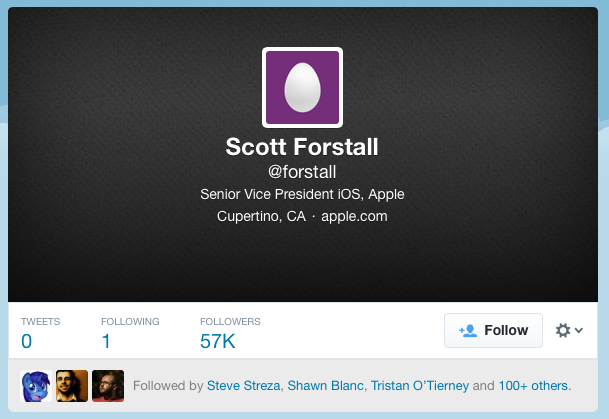 You can find your first tweet (or anyone else’s) on Twitter’s discovery page.