After just over a month since the last similar episode, several developers from around the world have reported a critical issue with iTunes Connect that is preventing new app and software update deployment to the App Store. Apple has noted the disruption on its developer system status page with a brief message: “Some users are experiencing a problem with [iTunes Connect].” The system status page lists the service disruption as occurring around 8 PM EST yesterday, but developers first began reporting problems with app and update submissions much earlier on Wednesday. The system status page does not report issues with any other developer services, and all consumer services report no issues. Apple does not provide a timeline for when it expects the disruption to be resolved nor does it offer the cause of the disruption.

The most prominent update affected by the outage that comes to mind is the previously announced iOS redesign to the Starbucks for iPhone app. The company previously announced the update would be released on Wednesday, March 19. Its developer shared that the update was released around lunchtime yesterday, but the processing phase that typically lasts less than an hour is still occurring. Other developers have reported several hours of processing time as well.

We’ve reached out to Apple for comment on the issue and will update if we receive more information. 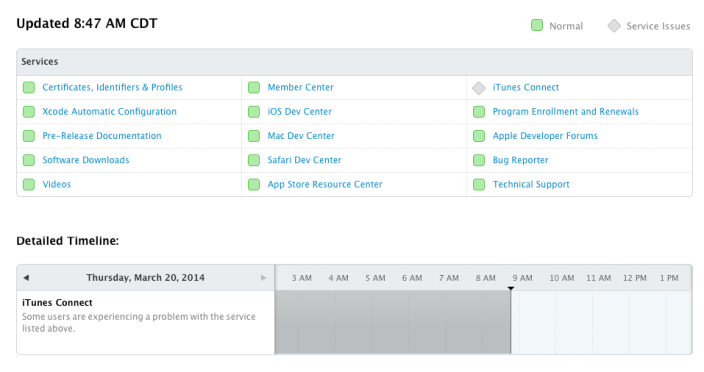