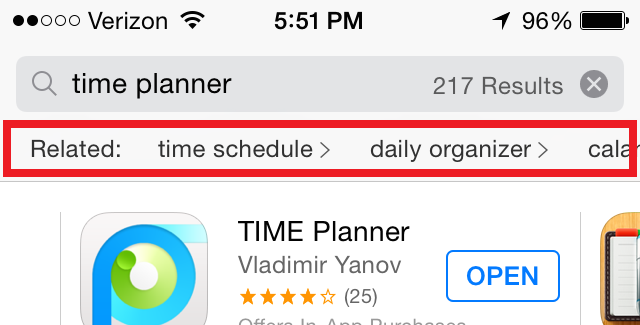 Update: Apple tells TechCrunch that the feature we saw should roll out to users over the next few weeks.

Apple appears to be testing a new feature for the iOS version of the App Store that presents users with related search terms at the top of the search results page.

The feature isn’t available to everyone yet, but users on iOS 7.1 and 7.0.x are reporting spotting it. 9to5Mac‘s own Zac Hall only had access to the feature temporarily, though his search results have now returned to the previous design.

The feature was first pointed out by Olga Osadcha on Twitter:

Just noticed "Related" search suggestions in App Store. Has it always been there? (iPhone only) pic.twitter.com/QDny04vNKs

Tapping the suggestions at the top of the page takes users to a new search page for that term, which, as pointed out by Osadcha, results in even more suggestions.

What's interesting is that if you tap on one of the suggestions it leads to other related suggestions, thus producing more and more keywords

There’s no word on when (or if) this experimental feature will be rolled out to all users, but it looks like it will be pushed out over-the-air without the need for a full iOS update. Apple has made small changes to the App Store interface without a full update before—a feature that’s possible because the App Store (and iTunes Store) pull a large part of their interfaces from the Internet rather than including them within the apps.