HTC has just announced its 2014 flagship in New York. Dubbed the new HTC One (M8), the device is just as all the leaks have depicted it over the past few months. Most notably, HTC is touting the device’s high-quality metal construction, which it describes “like a premium watch.” (Remember when Jobs described the iPhone 4 as a “a beautiful old Leica camera”?) The device is  available in a new Gunmetal Gray Hairline Finish that makes it look significantly more high-end than its predecessor. Taking a page out of Apple’s book, the device features a dual LED flash on the back, much like the iPhone 5s.

As with a lot of HTC devices, the company has really went all out with the camera and its software. HTC’s Sense 6 software also adds some new camera shooting modes, including “dual capture”, “selfie”, and “customizable manual.” The camera also features a 300 millisecond focus time, which is 50% faster than the previous generation 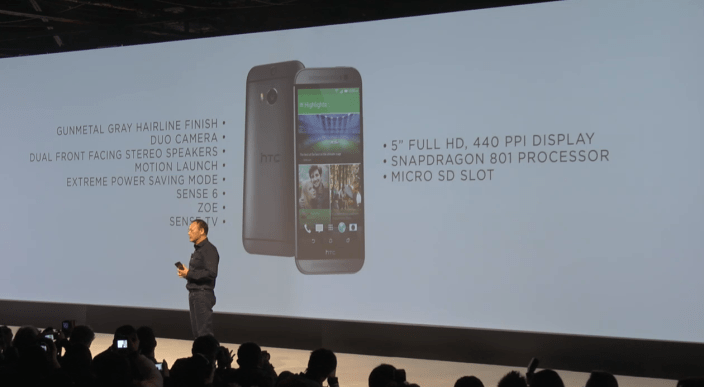 As far as availability goes, the device will be available at select Verizon stores today before being picked up by the other carriers in early April. Itt will, however, be available for sale online from all major carrier partners at 1PM EST. It will be coming to additional countries by the end of April, including Australia, Taiwan, UK, Germany, France, China.

We have much more on the new HTC One (M8), including specs and images, on 9to5Google.