Microsoft’s Office suite of productivity apps has long been rumored to be in development for the iPad shortly after the tablet’s debut in 2010. Most notably was The Daily (now defunct) reporting it had knowledge (and screenshots) of Microsoft’s software for Apple’s mobile platform in 2011, something Microsoft was quick to deny was legitimate. Three years and one CEO later, Microsoft is finally ready to play nice with the iPad.

Microsoft’s Office suite of apps will each be available as a free download, but will require an Office 365 subscription (which offers a 30-day trial) to create and edit documents. Users can still read and present documents with Office for iPad without a subscription. Office documents will rely on Microsoft’s OneDrive service for syncing content.

Word, PowerPoint, and Excel are now available on the App Store.

“Microsoft is focused on delivering the cloud for everyone, on every device. It’s a unique approach that centers on people — enabling the devices you love, work with the services you love, and in a way that works for IT and developers,” said Satya Nadella, chief executive officer for Microsoft.

Microsoft debuted its Office for iPhone software last June for Office 365 subscribers and today updated it to version 1.1 saying it’s now “free for home use.”

Apple made changes to its iWork suite of productivity apps last fall including making the software available for free with purchases of new devices. Microsoft has previously ran a number of ads comparing its mobile hardware against the iPad using the lack of Office on Apple’s platform as a point of contrast. 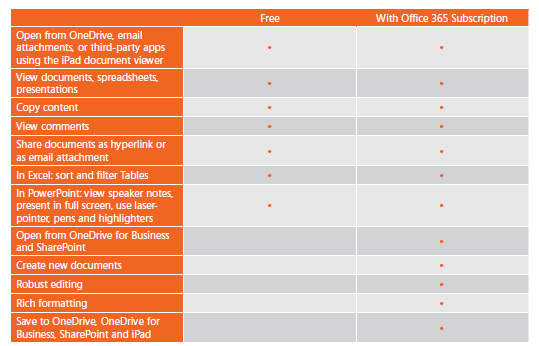 Earlier this month, reports surfaced that Microsoft is slated to release an update to its Office software for Mac later in the year. Microsoft also debuted its OneNote app for Mac earlier this month and currently have three apps in the top 20 free Mac App list.