Spotify has released a major update to its iPhone app, bringing a new dark look and feel. The new layout relies heavily on the contextual blurring and geometric motifs of iOS 7.

Artist artwork is masked in an oval shape, again reflecting iOS 7’s design direction. Album art remains true to its root as square imagery. There is a big focus on typography — a deference to surrounding chrome. Unlike Spotify’s first attempt at an iOS 7 update, which was basically a quick degloss of interface elements, this feels and looks really modern. 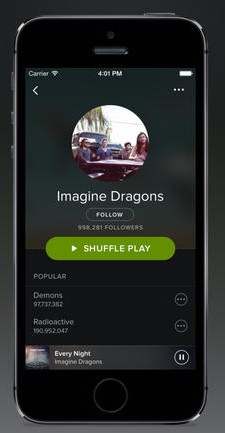 There is a similar refresh for Mac too, although the changes are less drastic than the iPhone update. iPad users are currently left in the cold, but Spotify says the design will rollout across all platforms eventually.

Product director Michelle Kadir told TheNextWeb that they wanted the new design to flow seamlessly across desktop and mobile experiences.

We really wanted Spotify to feel very familiar — so if you go to Spotify on your phone, or Spotify on your computer, it would feel the same. We thought that right now that’s not the case, so we wanted to do a big design change and basically make that work.

The update also brings a new ‘Your Music’ organizational feature. This allows users to collate all of their favourite music into one place (which syncs across every device, of course). It’s clearly an attempt to make the streaming music service feel like a users’  personal music collection (a la a iTunes). This replaces the starring feature of previous Spotify iterations, which simply lumped all ‘Starred’ music into one big list.

Spotify can be downloaded for free from the App Store.