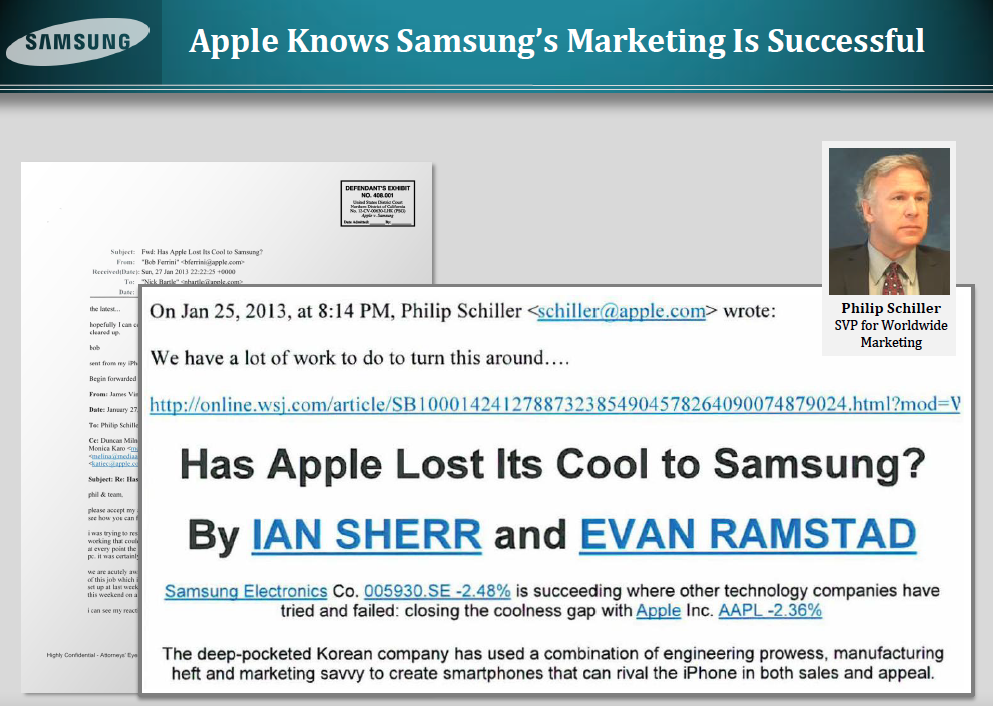 Apple SVP of Marketing Phil Schiller took the stand again today in the Samsung Patent Trial v2. Schiller was grilled on a number of emails Samsung came up with in discovery that painted Apple as paranoid about the rise of Android and Samsung’s Galaxy line in particular. CNET covered one such email where Schiller seemed concerned with the quality of Samsung’s Superbowl ad campaign:

After watching one Samsung pre-Super Bowl ad Schiller wrote an email to Vincent, commenting on the ad. “It’s pretty good and I cant help but think “these guys are feeling it” (like an athlete who can’t miss because they are in the zone) while we struggle to nail a compelling brief on iPhone,” Schiller wrote in an email, presented in court on Friday. He added: “Something drastic has to change. Fast.”

The concern was apparently so strong that Schiller wrote an email to CEO Tim Cook contemplating firing its dedicated marketing agency Media Arts Lab (MAL), a subsidiary of TBWA Chiat Day which itself is a subsidiary of Omnicom. Steve Jobs brought in Lee Clow at Chiat Day to create the Think Different campaign when Apple was teetering on bankruptcy in 1997 and the agency has been Apple’s only outside ad team ever since. In 2013, Apple’s “Designed by Apple in California,” was its first new branded ad campaign since 1997. Samsung positioned that campaign as a response to its Android threat… Re/code notes other emails regarding Samsung and other Android players outspending Apple in marketing and carrier channels to gain traction.

“Competitors have drastically improved their hardware and in some cases their ecosystems,” a member of Apple’s sales team wrote in a document that was prepared as part of a fiscal 2014 offsite meeting. Portions of the document were shown Friday to the jury in the Apple-Samsung case. The document, which was presented as part of Samsung’s cross-examination of Apple Senior VP Phil Schiller, noted that all the growth in smartphones was coming either from large-screen devices costing more than $300 or from devices that cost less than $300, with the segment that included the iPhone showing decline. Other concerns noted in the document included the idea that Android rivals were “spending ‘obscene’ amounts of money on advertising and/or carrier channel to gain traction” and that mobile carriers had an interest in limiting iPhone sales because of, among other things, the high subsidies they had to pay on the device.

Schiller said he didn’t agree with the assessment which was made by lower level sales execs within Apple. Apple did however eventually lower the price on some of its phones and is expected to unveil a much bigger iPhone 6 in the fall.

Following Schiller, one of Apple’s iPhone Engineers, Greg Christie testified, reiterating many of the details of the genesis of the iPhone which Apple had previously detailed to the WSJ (including the room where the first meetings were held).

The trial is expected to last the entire month with each company getting 25 hours of arguments followed by jury deliberations. The Apple v. Samsung trial will continue next week.