More North American consumers than ever planning to buy the iPhone 6, says survey 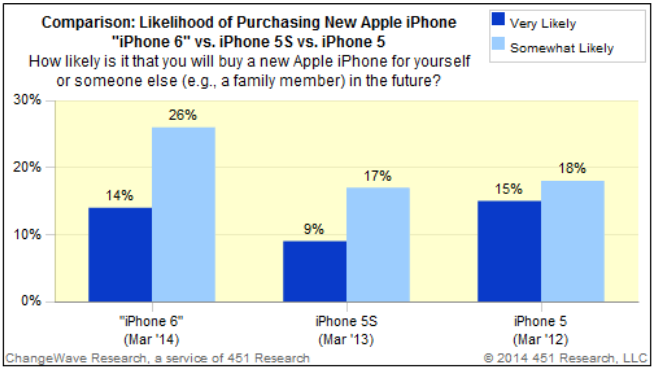 A large-scale survey from 451 Research that tracks North American consumer purchase intentions shows that the percentage of those likely to buy the iPhone 6 is markedly higher than was the case for both the iPhone 5 and iPhone 5s. In all three cases, the survey tracked intentions prior to any official announcement by Apple, providing a like-for-like comparison.

“This is the highest level of demand for an unannounced Apple model in a ChangeWave survey – stronger than we’ve seen in previous years for the iPhone 5S and iPhone 5 models prior to their announcements,” said Andy Golub of 451 Research. “Speculation over a larger screen iPhone is clearly striking a chord with consumers.”

It’s been rumored that the 4.7-inch model could be released before a larger 5.5-inch version.