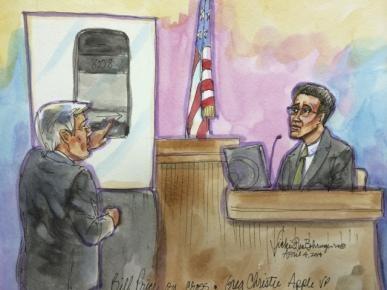 Apple has made its case against Samsung in the patent lawsuit that never ends, and the company’s attorneys rested today after an expert witness testified that Samsung should pay the full $2.191 billion in damages. As CNET  reports, Quantitative Economic Solutions economist Christopher Vellturo told the court today that Apple’s claim to over $2 billion is valid based on estimated profits lost to Samsung’s infringing devices as well as royalties owed to Apple for use of its protected software designs.

John Hauser, another of Apple’s expert witnesses, testified earlier this week that Samsung’s mobile phones would have been much less appealing to the public if they had lacked features that Apple created, such as the ubiquitous “slide to unlock” gesture. Together the two experts weaved a tale of desperation in which Samsung is depicted as having ripped off Apple’s design when it failed to create a compelling product that could stand its own against the juggernaut of the iPhone.

This case is really only halfway over, though. Samsung’s attorneys will now have a chance to defend against this narrative, providing testimony and evidence to support its own view and argue against the legitimacy of Apple’s software patents. Of course, it’s likely that once this case is over the two rivals will just find another reason to sue each other.