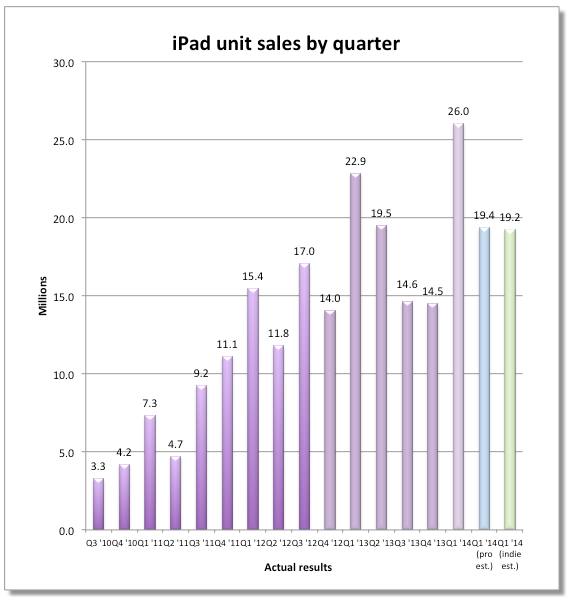 As highlighted by Fortune, analysts’ consensus on iPad sales for last quarter suggest that iPad sales will actually decline year-over-year by about 0.7%. Although the expected decline is small, this would represent a big shift in iPad momentum, especially since Apple saw a strong increase in sales for the holiday quarter, going from 22.9M units in the previous year to 26M this year.

If iPad sales have fallen, it wouldn’t be because of different market conditions to last year. Apple introduced the iPad Air at the end of 2014 around a year from the introduction of the iPad 4 at the end of 2012. Last year, Apple dropped the price of the iPad Mini a modest $30 while also introducing the highly anticipated retina iPad Mini. In 2012, it introduced the iPad mini. The product cycles are similar, so the decline isn’t due to any artificial inflation of sales last year.

Apple has also been pretty aggressive in price drops on the iPad line, with $50 markdowns being about the norm (currently at Best Buy) as well as expanding TD-LTE support to China in March. Apple also began selling refurbished retina iPad Minis in its Apple Store yesterday, though it is probably too late to make any mark on the current quarter.

The consensus across all analysts polled is 19.3 million sales, compared to 19.5 million in the same quarter in 2013. As usual, amateur analysts are slightly more optimistic than the professionals, but not by much. The difference between both groups is only 200,000 units.

At the extremes, Asymco’s Horace Dediu expects sales of 21.8 million and Braeburn Group’s Matt Lew estimates just 15 million unit sales. Even if sales reach the top end of the estimates, growth will still have substantially slowed compared to 2012 to just 10%. By comparison, the Q2 2013 quarter saw 55% growth. The change in growth rates over such a short space of time is a little concerning.

Having iPad sales peak at a time when Apple released two major updates to the iPad line (the Retina Mini and the iPad Air) does not paint a good outlook for the product’s future. Apple will report its actual iPad sales in its earnings call on April 23rd. 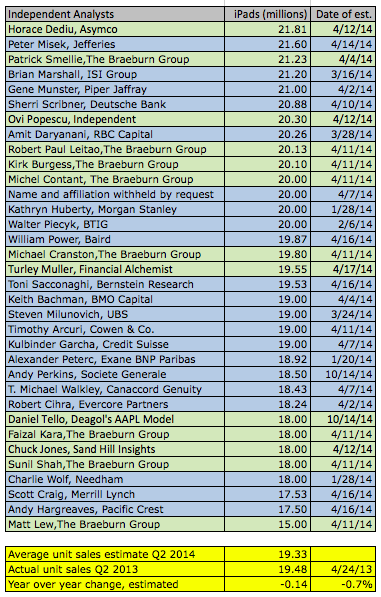