The consensus view of 40 analysts polled by Fortune is that Apple’s year-on-year revenue for its fiscal Q2 (Q1 of the calendar year) has fallen by 0.2 percent to $43.6B. This follows earlier predictions that iPhone sales will have grown two percent, and iPad sales will have dropped by 0.7 percent.

Most of our analysts (31 out to 40) are playing it safe, offering estimates within the range of Apple’s guidance — between $42 billion and $44 billion.

Although earnings per share is expected to have grown by 2.4 percent, this growth is largely an illusion: Apple’s stock buyback scheme means that the same earnings are split between a smaller number of shares.

Unsurprisingly, with most now using their iPhones for music, iPod sales are expected to have been hit even harder, analysts expecting year-on-year drop of more than 45 percent. This would be in line with the fall seen in the holiday quarter, with Tim Cook describing the product line as “a declining business.”

As we mentioned before, all eyes are going to be on Apple’s guidance for Q3 to see whether Apple plans to launch anything new in the first half of the year, with an iWatch the most likely prospect for a potential WWDC announcement.

The full table of analyst forecasts can be seen below, the professionals in blue, independents in green. 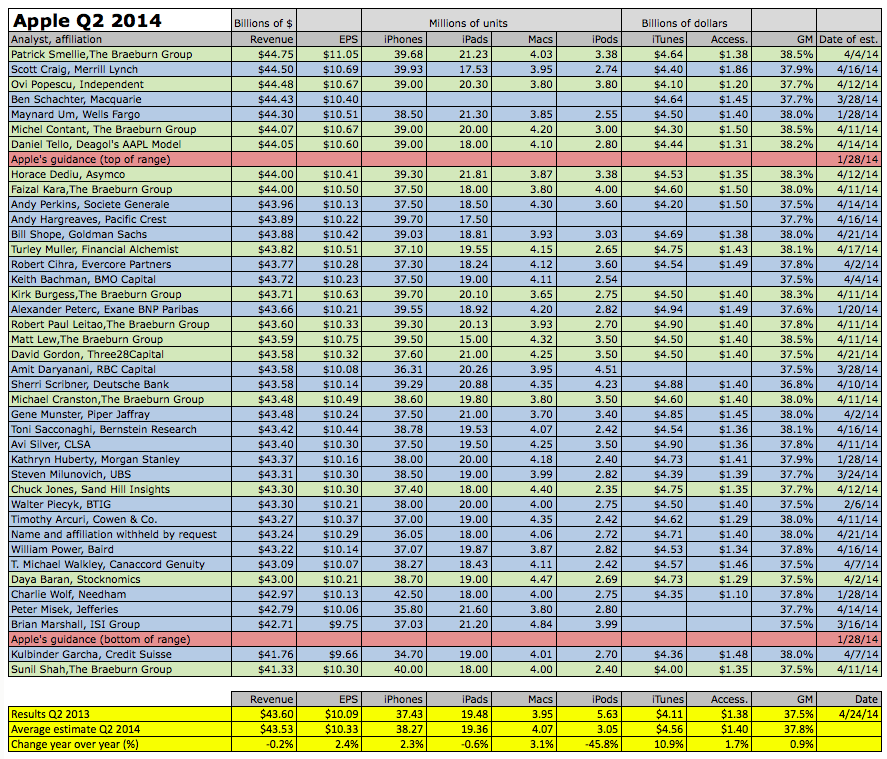