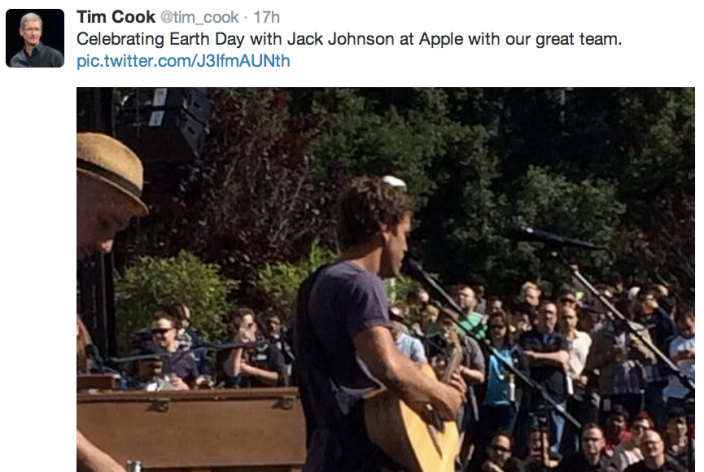 As Apple continues to observe Earth Day this year with its new Tim Cook-narrated “Better” film and detailed environmental report card site, the Cupertino company is issuing Apple-branded reusable water bottles to both corporate and retail employees to promote responsible.

Each water bottle features an Apple logo as well as a colored band picked by each employee. In Apple’s message to employees, the company said retail locations will receive their Earth Day company-issued reusable water bottles at a later date as distribution is currently taking place for Cupertino employees.

Apple observed Earth Day at its Apple Store retail locations across the globe yesterday by turning the leaf in its logo green at several stores. Employees wore special green shirts (as opposed to their signature blue shirts) and badges to mark the day as well.

Tim Cook and his colleagues in Cupertino marked the day with a special Earth Day event at its campus featuring performing artist Jack Johnson as Cook tweeted yesterday.

Celebrating Earth Day with Jack Johnson at Apple with our great team. pic.twitter.com/J3IfmAUNth

Update: Here they are…