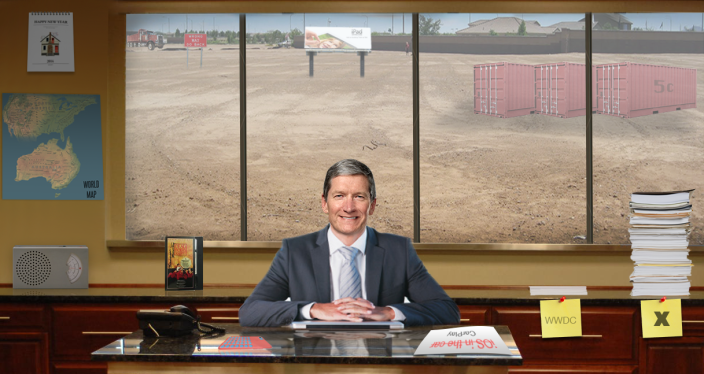 Investors and analysts are sure to raise this point during the call, and we’ll be listening and bringing you coverage starting at 5pm EST/ 2pm PST.

-20 minutes ahead of the call, very relaxing piano playing, this should keep everyone alert!

-Tim Cook: “We have a lot to share with you over the next hour..”

-Cook: “iTunes is a very important driver of our business… nearly 800 million iTunes account… most with credit cards”

-Cook: Continue to believe tablet market will surpass PC market in the next few years and Apple will be a great beneficiary

-Cook: Over half of added iPhone users with new to the product

-Cook: “We solicit input from a broad base of shareholders” Icahn comes to mind…

-Cook: “We believe our current stock price does not reflect the value of the company”

-Cook turning the call over to Luca Maestri

-Cook thanks Oppenheimer for his time at Apple, 10 years

-First question on making money on future install base

-Cook says products are priced fair, decisions made with each thing as it gets closer to time to come to market

-Next question about March quarter and what drove the numbers

-Maestri walking back through what helped numbers and discussing upcoming Q3

-Cook answers discussing stricter enforcement in the upgrade policy in the US, says strength of iPhone was generally broad based and host of other markets drove results

-Next question asking Luca Maestri about $41 iPhone ASP decline and what drove it, iPhone 4s?

-Cook says iPhone 4 sales were single percentage of sales, carrier policies could actually increase upgrade cycle with new programs offering higher price to upgrade more often, opportunity for Apple is that smartphone market is only a billion or so units and will eventually take over entire mobile phone market, certain large regions saw 80% new-to-iPhone numbers go to iPhone 4s (there’s an awful lot of talk about the iPhone 4s from two refreshes ago), cites ability to keep customers and introduce them to the “ecosystem”, Cook says some carrier plans help and some hurt but “completely unclear” to him how it will net result

-Cook commenting on overall success of iPad in consumer, enterprise, and education markets; describing it by market and how it approaches each one, says student achievement is higher in the classroom with iPad than without it, says match has been lit as 95% share of education market is iPad, says 91% of tablets in enterprise were iPad with 98% of Fortune 500 using iPad, says company needs to focus on penetration and having it be broader, says he believes Office does help, would have been better for Microsoft if done earlier with so many alternatives brought to market now, believes it helps in enterprise area for iPad sales, cites 98% customer satisfaction and 4x web traffic on iPad than Android… all of that said to look at trend of iPad rather than quarter numbers

-Cook: There’s no shortage of work going into the next iPad, the next big idea

-Cook discussing importance of staying focuses on products, company comfortable on expanding, working on things in the background, not ready to pull the string on the curtain

-Next question about competitive landscape for smartphones, cites Microsoft/Nokia deal and Motorola/Lenovo deal

-Cook: Lots of changes, some people giving up and pursuing other things, cites iPhone 4s as its affordable smartphone, says proud to ship that product, cites Apple’s entrance into a number of growing markets, says proud of results for Apple

-Next question coming from Gene Munster (you all know him, Apple TV guru), asks about removal of hobby label from Apple TV and Amazon Fire’s HBO deal

-Call wraps up, will be available on iTunes for a brief amount of time

Not one analyst asked Tim Cook what he meant when he said new products across 2014 last year. Surprised.

Apple has 10 stores in China now? Tripling that number isn't that wow...

How many Apple TV devices has Apple sold? The company just revealed a big new #: 20 million. (Last May: 13 million.)

Just give me my iWatch. You folks can continue to debate iPads.