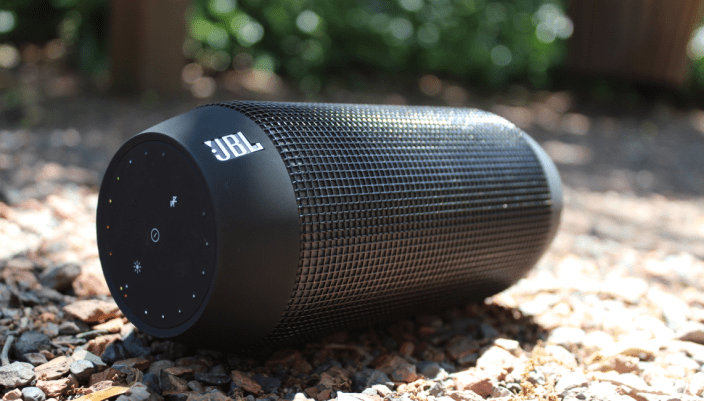 We’ve taken a look at a vast array of portable Bluetooth speakers and have found that most include similar features but sound quality and reliability can vary greatly. That’s why we eagerly awaited the arrival of our JBL Pulse, because it dares to be unique in a sea of familiarity. A dazzling display of LEDs encompasses the entire unit, bringing your music to life by dancing along with the beat. We put this new speaker to the test to see if this LED-studded speaker is just a novelty or if it has a lasting impact on the way we enjoy our music…

Overview
The Pulse is much smaller than I imagined it would be. After reviewing the press images and promo videos, I was expecting the speaker to be about the same length as a football, but it’s actually only about 6-inches long. Its diameter is just over 3-inches, which is just small enough that it fits in large cup-holders.

The speakers and LED lights wrap nearly 360-degrees around the unit except for a thin strip that is home to a micro-USB port for charging (cable/wall adapter included) and AUX port to hook up an audio source directly. The speakerless strip is conveniently flattened so the unit can balance on a flat surface. Both the end caps and the port strip are covered in a rubberized black matte finish that seems to hold up well to scratches and bumps.

The speaker is covered by a tight metal mesh that’s thin enough to let the LEDs shine through but also feels solid and protective. All of the buttons reside on one end of the unit, including the power, volume, Bluetooth sync, and LED controls.

Sound Quality/Light Show Impressions
The design and build quality of the speaker is top-notch. In no way does it feel fragile or cheap. I wouldn’t be comfortable bringing it along any extreme adventures, but I wouldn’t think twice about tailgating, camping, or picnicking with it. You definitely do not need to handle it with kid gloves.

As for overall sound quality I would say it’s good. It certainly packs enough “oomph” to fill a small to medium-sized room with great sounding music, but when I tested it outdoors, tailgating at a Jimmy Buffett concert, I found myself wishing it was louder. Although, when the party moved underneath a tent it was plenty loud enough to get everyone moving. No matter the listening environment, I never found the sound to be distorted in any way, but I did wish it had just a bit more punch for bass-heavy songs. 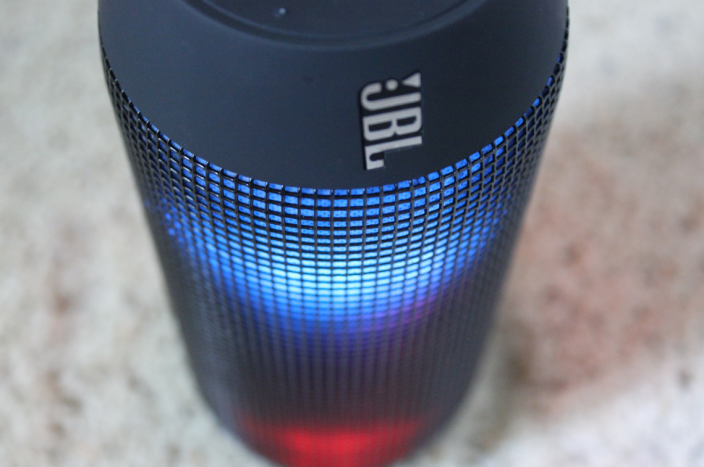 Now on to the main attraction, the dancing lights! You can choose between several pre-programmed light displays or download custom ones. Each display features a unique blend of colors, movements, and intensity. I found every option to be bright and really responsive to the music. This feature is definitely unique and catches everyone’s attention.

Upon syncing an iPhone or iPad with the Pulse you will be prompted to download the JBL app. This add-on lets you easily adjust the programmed light shows and use an audio equalizer to improve sound quality. The app is extremely easy to use, and the only downside I found is that you need to manually add songs from your music app into the JBL app before playing them. This isn’t a lengthy process but it does add a couple extra taps before you can start rocking out. You can also rotate through the default light shows without the use of the app by simply hitting the button on the unit.

Bottom line
I absolutely think the JBL Pulse does a great job of separating itself from the pack of mostly mundane portable Bluetooth speakers. The LED light show is an interesting concept but don’t expect it to transform your dull apartment party into a wild rave. This compact speaker will certainly look cool in a dimly-lit room, but it’s just too small to become the focal point of a large party.

I chose to forgo the lights while tailgating to conserve battery life because I knew I would be in the parking lot all day. You’ll get about half as much battery (~5hrs) with the lights on as opposed to off (~10hrs). The sound quality is loud and clear indoors but gets a little lost when taken outside, and I still wish the bass had just a bit more pop. Other items on my wish list include power bank functionality and brighter colored button icons to make them easier to see outdoors.

I would recommend the JBL Pulse to anyone looking to spice up small parties while enjoying great music. It carries an MSRP of $200, but is currently on sale for $175. If you don’t see a need for the LED light show, then I would check out JBL’s Flip 2 ($100) and Charge ($150) speakers, which also boast terrific sound quality. The Bose Soundlink Mini ($200) and Logitech UE Boom (on sale for $179) are other great alternatives if you would like to consider other brands.