A new video by Unbox Therapy has been uploaded today, directly comparing the supposed iPhone 6 cases to a fifth-generation iPod touch. The video finds that the iPod touch fits exactly inside the case — suggesting the iPhone is about 6.1mm thin. This lines up with renders from last week, which said that the iPhone 6 measured about 6mm in thinness (subject to some rounding). Supposed images of the iPhone 6’s volume buttons have also surfaced today. 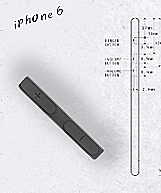 On top of this, an image purportedly showing off iPhone volume buttons appeared on Weibo (as noted on MacRumors’ forums). Compared to the current volume buttons on the iPhone 5s, these buttons are more rectangular — ‘pill’ shapes. Although it is hard to tell from the picture, if you use the + – icons as a frame of reference, these buttons seem much thinner than the current circular buttons, assumedly to fit inside an overall slimline chassis.

The new button shapes are also shown in the leaked cases. In fact, the new volume buttons seem very similar to the buttons seen on the current iPod touch.

It’s hard to believe that Apple can fit all the components of a phone into a case this thin, but every day more and more evidence surfaces supporting this outcome. Apple is expected to announce the new 4.7 inch iPhone (and potentially a 5.5 inch variant as well) later in the year.