Having remarked that I don’t generally favor hiding iDevices in cases, I find myself reviewing the second iPad case in a week …

There’s no shortage of Bluetooth keyboards available for the iPad Air, and we previously did a roundup of some of the early contenders from Logitech, Belkin and ZAGG. However, only the ZAGG offered a backlit keyboard for use in the dark, so when Kensington joined the fray, I decided to give it a try …

While typing in the dark might seem like rather a niche activity, I do quite often use my iPad in minicabs late at night when I’m feeling too lazy (or have partaken of too much fermented grape juice) to cycle the two miles home from the station. A backlit keyboard is ideal in this situation. 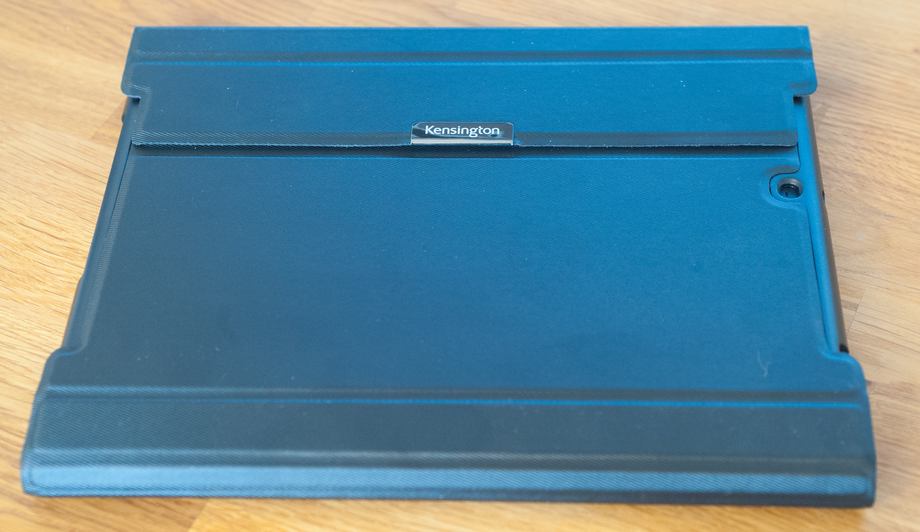 It’s always surprised me that no-one seems to have created an iPad keyboard case with a leather wrapping. I always liked the leather Smart Cover, and it seems to me there has to be a market for a truly premium keyboard case. Yet one metal-cased example apart, they are all plastic or rubber – and the Kensington keyboard is no exception.

It has to be said that visually it’s pretty smart-looking, with a crisp, business-like appearance and a metal plate with the brand. The feel of the plastic, however, is rather like those vinyl-covered fake-leather folios you used to get at conferences in the days before USB keys were handed out instead. It looks better than it feels.

The rigid plastic does, though, feel tough, offering a comforting level of protection when placed loose into a bag. I never worried about the iPad getting scratched or knocked.

The iPad also snaps easily in and out of the case, yet never feels in danger of falling out. 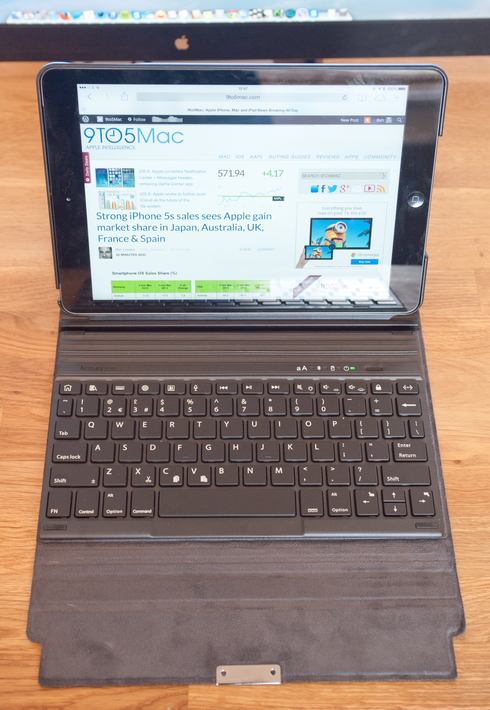 There flap with the name-plate is magnetic, keeping it securely closed when not in use but easy to open once you’re ready. The flap can either extend out in front of the keyboard, or fold back underneath it, or double-up in front for a thicker pad. On a desk, extending towards you provides a pleasant-feeling wrist rest as you type. Used on your lap, it’s easier to tuck the flap away underneath.

The iPad can be supported at one of three different angles. The primary position, with the deepest and most secure ridge, is a fairly upright one. I found this worked well on a desk. 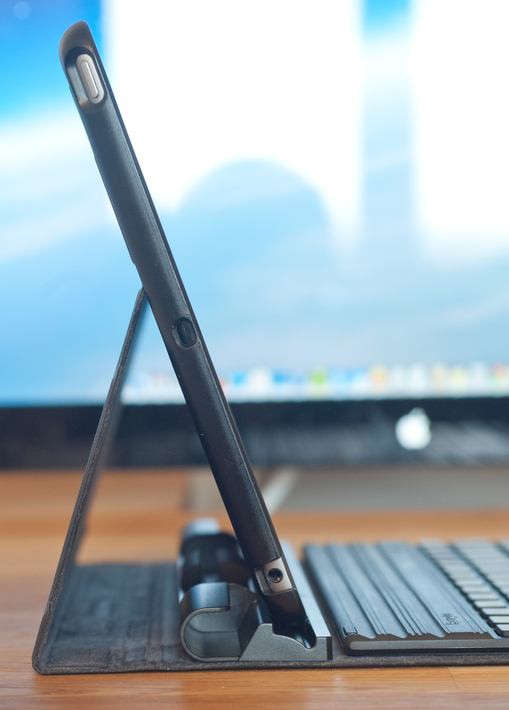 From the ridges you can see, it looks like there are three further positions, but one of them has the magnet repelling rather than attracting, so there are two positions, with the photo below showing the most reclined. I found this the best angle for lap use. 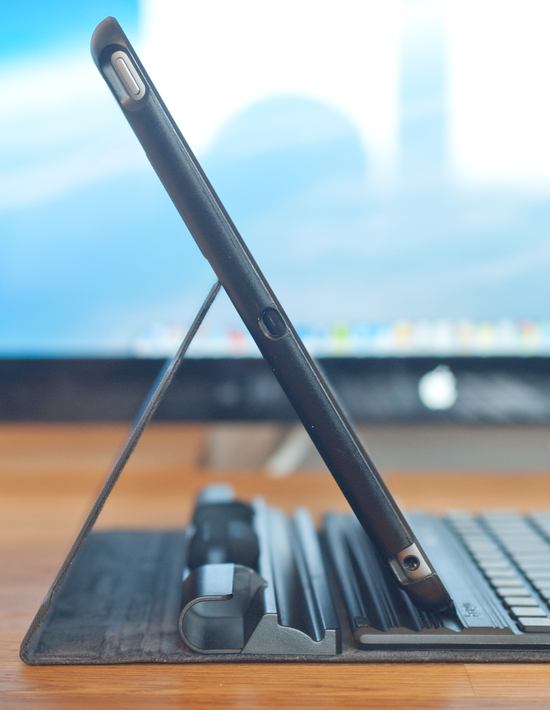 However, there is even more flexibility than this, as the keyboard itself is only attached to the case magnetically, so you can slide it forward if desired. The promotional video at the top illustrates this well.

As is usual with iPad keyboards, there’s a row of function keys to act as shortcuts for functions like Siri, media playing, volume, home and lock. 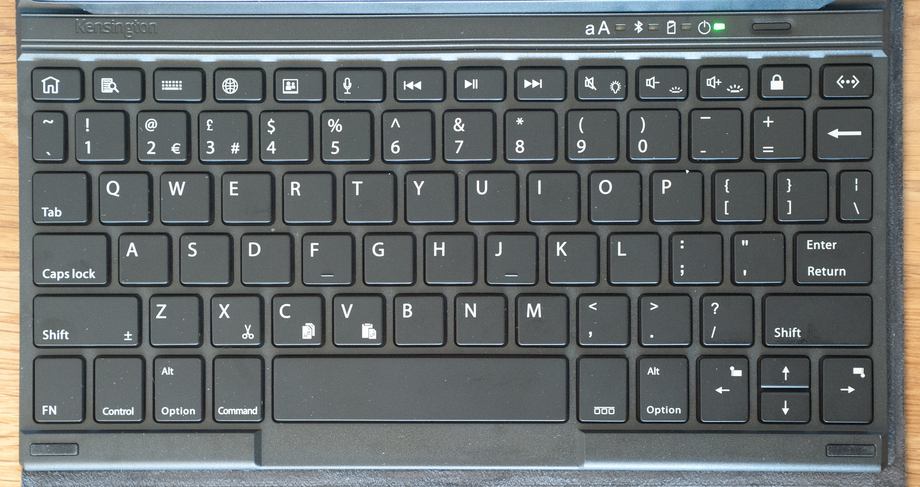 The keys themselves are also the standard chicklet keys designed to emulate those of an Apple keyboard. They are full moving keys with a very positive action. However, I haven’t yet found a third-party keyboard which matches the feel of genuine Apple keyboards, and the Kensington was just a little too springy, requiring somewhat harder taps. It’s easy enough to type on, but not quite as pleasant as the real thing. 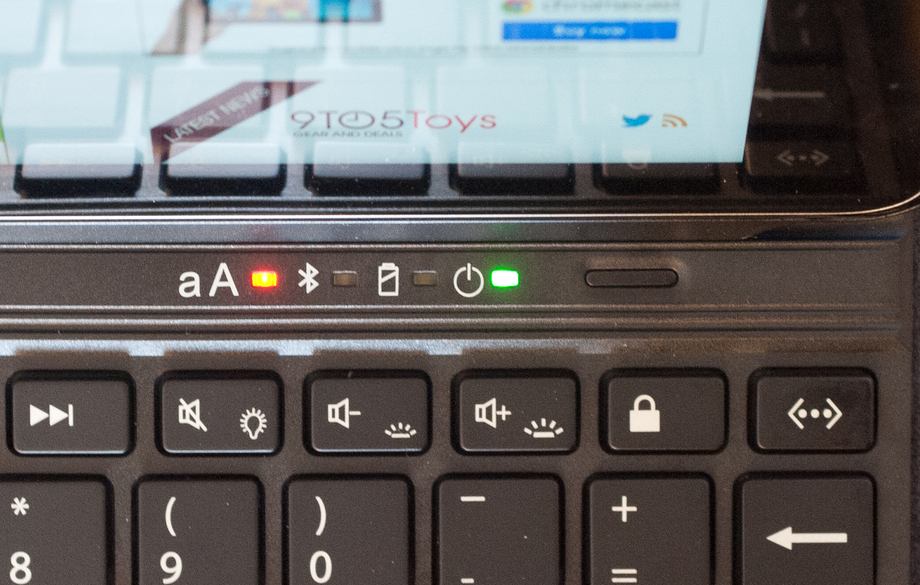 The backlighting is switched on and off using the volume keys with the Fn key. It’s pretty subtle in all but totally dark conditions, but if it’s dark enough to need the backlighting, it provides sufficient light.

I still haven’t found my perfect iPad keyboard case. I’d love something with the light yet positive action of an Apple keyboard, combined with a leather-wrapped outer casing. Any iPad keyboard case is a compromise, the Kensington Key Folio Exact Plus included.

That said, however, I found it a solid product. It offers a very decent level of protection from the kind of everyday knocks and scratches it might see when carried in a bag with other things. It’s easy to open and close, and to insert and remove the iPad.

The choice of angles worked well both for desk and lap use, and the keyboard itself has a decent action, if slightly too springy. The backlighting works well in darkness, and would be my main reason for choosing this over similar, non-backlit options.

Official pricing is extremely expensive, at £139 in the UK, which translates to over $200 in the USA. At that price, it would be hard to justify this over substantially cheaper options out there. However, it can be found on Amazon for as little as $81 with free shipping, at which price it compares extremely well with offerings from the the main other players. Until my perfect keyboard case arrives, this one will probably be my preferred option.